I got a chance to play Moving Out recently, a new game from Team 17 and developer SMG Studio, and it seems like a lot of fun. Imagine if Overcooked was about house removal and you’re not far off.

You and up to three friends must work together to empty out increasingly complex houses, guiding corner sofas through doorways and flinging televisions through windows before stacking them on your removal van. The quicker you do it, the better your performance.

It captures that same manic energy as Overcooked - especially when you work with another player to guide a larger object out of a building. It helps that you can also accidentally slap each other.

But one area that really impressed was its accessibility and customisation options. First off, you can completely adapt the difficulty of the game - you can make it so the furniture disappears in the van, rather than making you stack it, and you can make it so large items can be carried alone. 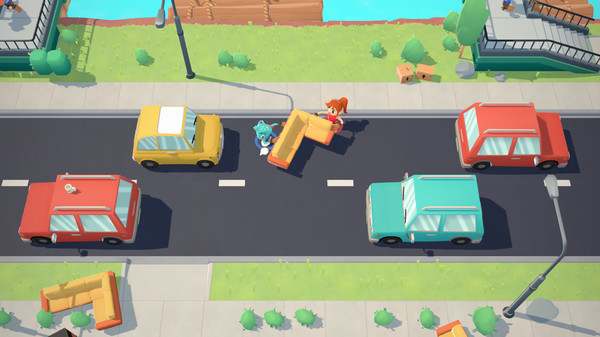 The controls are completely remappable and you can toggle the option to hold buttons to grip objects or simply press.

Then there’s the customisation options, which allow you to put each character in a wheelchair if you wish. Rather than having specific characters in wheelchairs, it’s simply an option for each one. You can also put a hijab on many of the characters.

Ash the studio head (that's me) is also Muslim, so wanted to make family happy. And it feels like should be standard customization option these days.

That option comes from the studio head, a Muslim creator who felt like it’s an option that’s missing from character customisation in many games.

Moving Out releases on April 28 for PS4, Xbox One, Switch, and PC.