Mordhau is now available to play on Steam and it comes with a lot of quite complicated combat mechanics.

Chambering is a defensive tactic in Mordhau, and it would be wise to get to grips with the skill early on. It acts sort of like a parry, where you need to mirror the angle of an incoming attack and react at the right time during its release for it to work. It uses up a lot of stamina and can also be used for offensive purposes.

A chamber’s main function is to gain the initiative and punish feints, so it’s way more effective than a simple parry. Getting your distance, angle and timing is key to its success, so let’s take a look at how to do it.

Thanks to Ɖ|Hadeus from the Steam community for creating a cracking guide on how to chamber and more.

Mordhau: how to chamber successfully

A chamber is a two-step process where you need to take into consideration timing and angle. You need to determine what angle your opponent is coming from, then time your move correctly just before your opponent’s attack lands.

In the case of a chamber, the angle is the type of attack being performed and how you aim your mouse isn’t relative, compared to aiming when performing a parry. Think of it as a reaction to your opponents winding up of an attack - if your opponent attacks from the upper left, you’d chamber by mirroring the move to the upper right.

The only time this doesn’t apply is with stabbing, as the angle doesn’t matter, just the timing. They are the easiest to perform, so practice with stabbing first.

Timing wise, it’s pretty similar to a parry. You want to react at the last second, such as when an opponent grunts before landing a blow. Practice a few times and you’ll soon learn the timing of each move and can pinpoint when to chamber an attack. 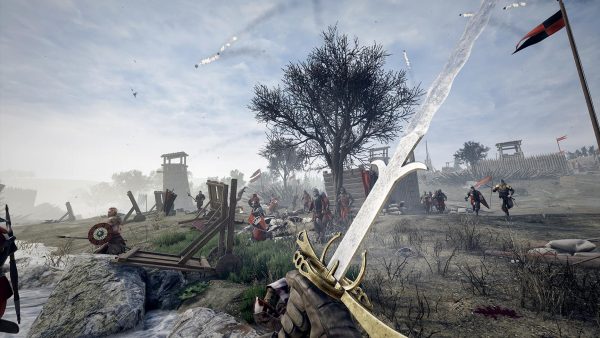 The more distance there is between you and an opponent, the more time you’ll have to react. If you’re in very close quarters combat, you might not have the time to get out the way, nevermind chamber or parry.

If you can see your opponent's full swing trajectory, you’ll have a much better chance of landing a successful chamber. Backpedal on a parry to get more distance between you then look out for the opportunity to chamber the next attack.

A good opponent will use a chamber against you well, and over-using it will slow you down and make you an easy target. Being able to recognise a feint and getting out of the way or parrying is a better bet than over-chambering, and you can also use a riposte if you want to change things up.

Try and force a parry or two before unleashing a chamber, as it will give you time to observe your enemy and quickly adapt to their playstyle. If you know a player likes to chamber on the reg, feint a chamber then hit him with a combo strike.

The issues with earning Gold and XP have now been fixed, so make sure you restart your game to apply the latest update.