After a very lengthy hands-on session, it seems clear Capcom is on the right track with their monster-slaying action RPG series.

Capcom's big aim with Monster Hunter World is obvious - to capture a new, broader audience for this open-ended, unique series. That makes the opening of the game important, as it'll be a vital moment for the franchise with a great many new players.

After spending two full days and well over ten hours running through World's opening hours, it's fair to say Capcom has the right idea. It's shaping up to be something really special. Disclosure before we start: Capcom paid for travel and accommodation to attend this event. 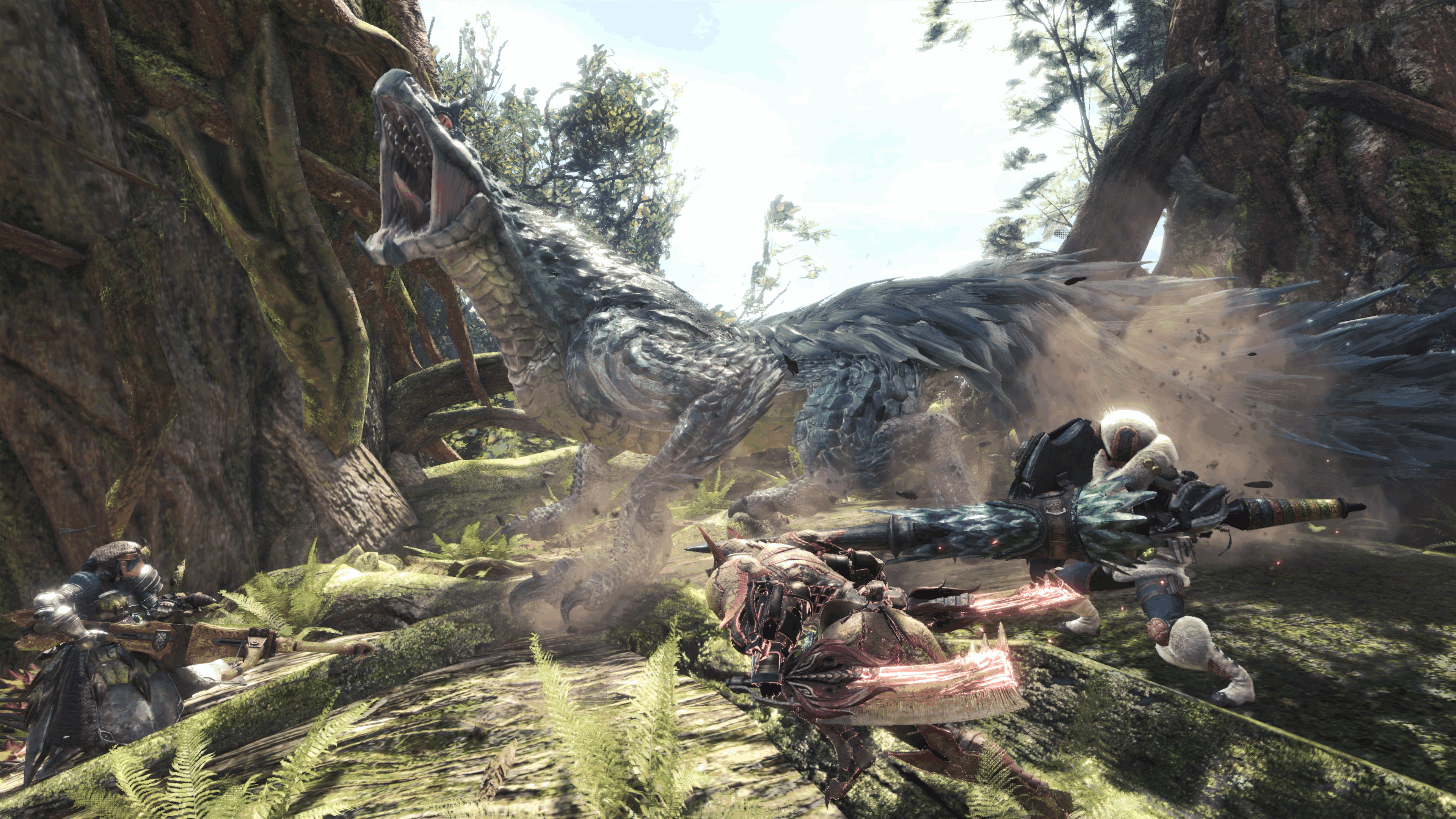 "The core loop of preparation, combat, looting and upgrading is a blast, and it's why Monster Hunter has had such success in Japan in the past. World replicates this flow perfectly on a big-budget console level."

The thing that surprised me most about Monster Hunter World is just how much like classic Monster Hunter it is. Back at E3 there were concerns about its streamlining of major mechanics and systems, something the game's Producer and Director pushed back on in our interview at the time. This proper, lenghty hands-on with a fairly complete build of the game underlines that they were correct: this is absolutely Monster Hunter at heart.

What this means is that the game doesn't worry too much about holding your hand or funnelling you into main quests. It doesn't desperately fret that you're going to get lost or sidetracked - in fact, it wants you to, for the sake of exploration. Broadly speaking the next path you're to take is always clear, but there's never too much pressure, narrative or otherwise, to crack on with the main quest. Monster Hunter World wants you to stop and smell the roses and touch the monster mucus - all that stuff.

It also means that the game is still stylistically unabashedly Japanese in a way some other big-budget Japanese RPGs like Final Fantasy 15 have tried to water down. That sort of energy and sense of style around the world and its characters, from your over-exuberant, hand-flapping assistant to the brilliant anthropomorphic cats who cook and assist you, is a welcome thing.

The general flow of the game is pretty simple, with you starting out any mission in a hub area filled with friendly characters and useful service-providing NPCs. You'll pick up a quest from the bulletin board and then head out on that quest, either with other players or alone. The difficulty of the quest will dynamically alter based on if you travel with others or not, meaning the game can be soloed if you want - but really, World is designed to be experienced with others, with players mixing and matching the wide range of weapons and abilities to take on monsters in a coordinated way that resembles the best MMO raids. 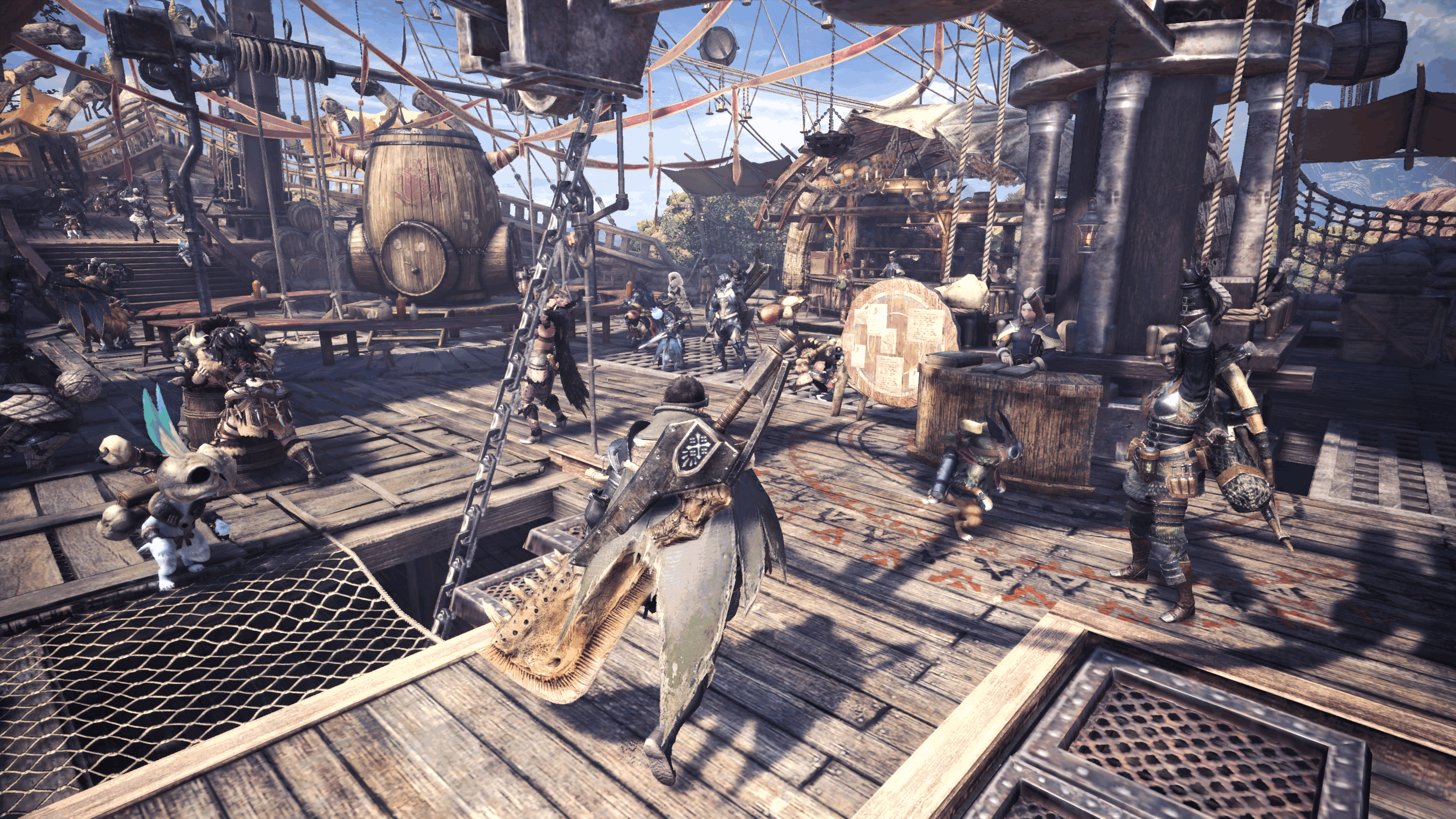 Monster Hunter World is less 'open world' and more 'open stage' in that you'll travel to different zones that are discrete and unique from each other, but each zone is also a wide open-ended area. You can travel for one mission but explore, gather materials or hunt down a different monster instead, or you can even travel to the zones outside missions to explore objective-free. Material gathered in the wild or looted from the corpses of defeated monsters is everything in World, with your main means of progression a combination of improved skills on the player's part and upgrades to armor, weapons and other gear.

The core loop of preparation, combat, looting and upgrading is a blast, and it's why Monster Hunter has had such success in Japan in the past. World replicates this flow perfectly on a big-budget console level. Even this early on I found myself diverting away from the story missions to hunt for specific pieces of loot I needed in order to complete an armor set. On those armor sets, by the way - some of them are ridiculously bad-ass, and the boost in visual fidelity on the current consoles finally allows me to understand what the 'glamour hunter' dress-up aspect of Monster Hunter fandom is all about.

"This game is about its world, and that world is filled to the brim with stuff that interacts and does cool stuff."

Anyway, the other big wrinkle in that loop comes in the combat phase. There's a sort of living ecosystem behind-the-scenes in Monster Hunter World, and the creatures on the map aren't limited based on your mission. While hunting the electric, lizard-like Tobi-Kadachi the more powerful dinosaur-like Anjanath is also out there, for instance, and if you're lucky you'll see some spectacular monster-on-monster encounters that might help you towards your objective.

Case in point: I was really struggling to do the Tobi-Kadachi solo, and I'm stubborn and wanted to do it alone. In the end I found the best way to defeat it was to recruit the Anjanath as an ally. To do this I had to carefully lure the Anjanath to my target. This wasn't easy - it's a powerful monster that at the time could down me in a couple of hits. Cue me running like a mad man, occasionally turning around to check I still have aggro. If the Anjanath turns away, I whip out my slingshot weapon and give it a double blast in the behind with rocks to draw its attention again. I've done this sort of aggro-drawing thing in games before, but it isn't tedious here. 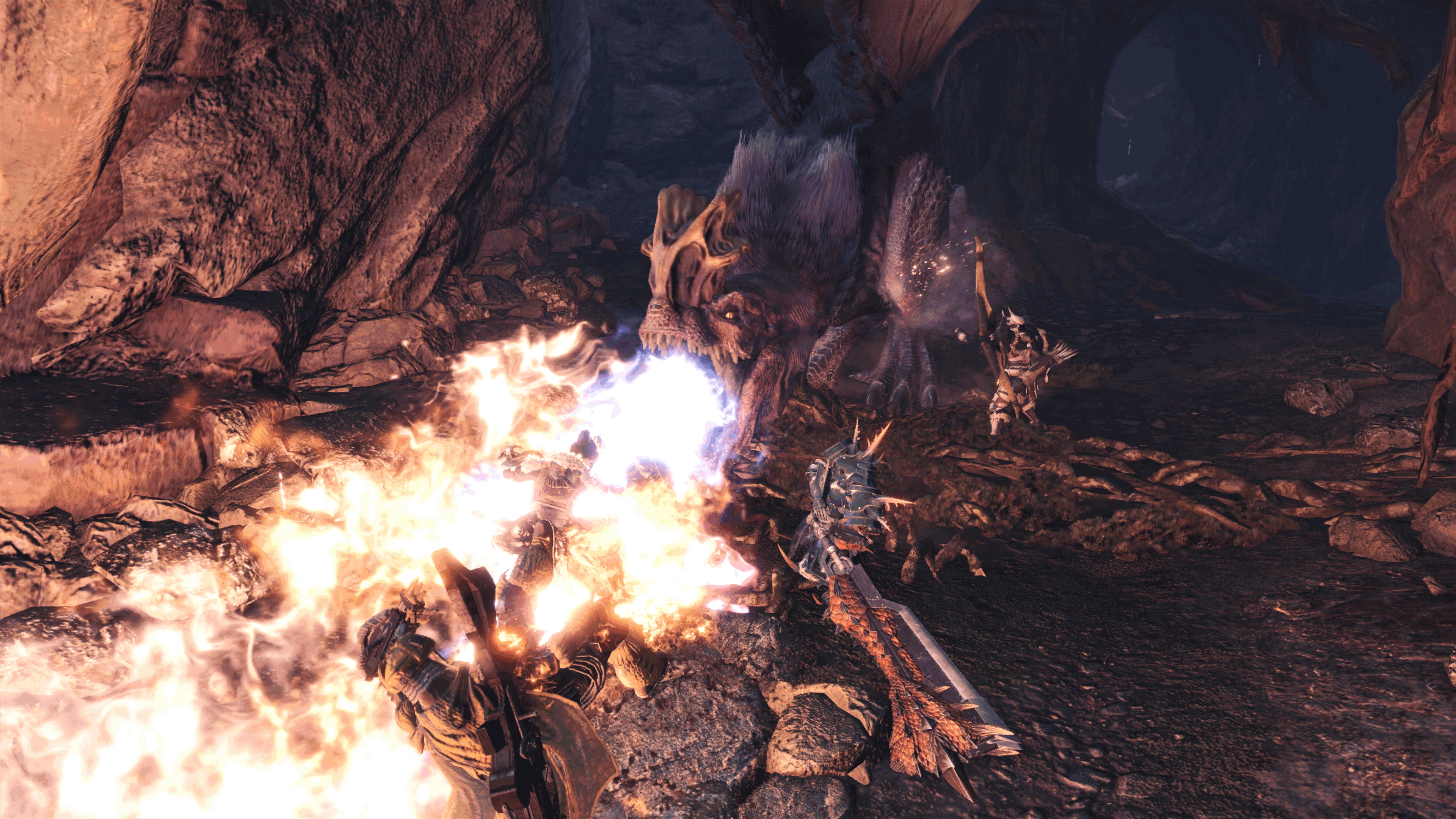 That's mainly because there are creatures bloody everywhere, big and small. I'm dodging stuff, triggering traps to slow the Anjanath, and generally things are tense and exciting. Eventually I do succeed in leading it over and once I manage to trick them into engaging each other the result is a pretty amazing clash. It's also a worthwhile endeavor: the Anjanath deals something like 400 damage in one massive neck-biting body slam, whereas each hit of my weapons was dealing 10 to 15 at most. It was a risky shortcut, but it paid off - I was able to trace the limping, wounded creature back to its lair to finish it off. With other monsters I was less cheap, instead making use of things like traps and learning their weak points to take them down efficiently or to break off things like horns or chest plates to take home as valuable armor-upgrading loot.

This is where the World subtitle makes the most sense. While it's also named, I think, for the worldwide launch and the focus on a worldwide audience, this game is about its world, and that world is filled to the brim with stuff that interacts and does cool stuff. It's also gorgeous (at least in this build, played on a PS4 Pro) with a decent variety of areas. We only got to play what was essentially two large maps, but plenty more have been glimpsed in trailers. It also has one of the most lovely, welcoming hub areas I've enjoyed in a game since Mass Effect's Normandy.

There just seems to be so much to do, too. There's research to complete, both story and side missions, loads of lovely RPG gear (which the team is serious enough about that we're not allowed to talk about the stats of) and a range of weapons to master, each with unique abilities. There's 11 melee weapons (Great Sword, Long Sword, Dual Swords, Sword and Shield, Hunting Horn, Hammer, Switch Axe, Charge Blade, Insect Glaive, Lance, and Gunlance) and three ranged weapons (Light Bowgun, Heavy Bowgun, and Bow) on offer, and they're all really very different. I fell in love with the Dual Swords pretty quickly, but I saw some astonishingly high level stuff with the Sword and Shield from friend of the site Arekkz at the event. Anyway, the point is this - all the depth hardcore Monster Hunter fans would want is intact here. 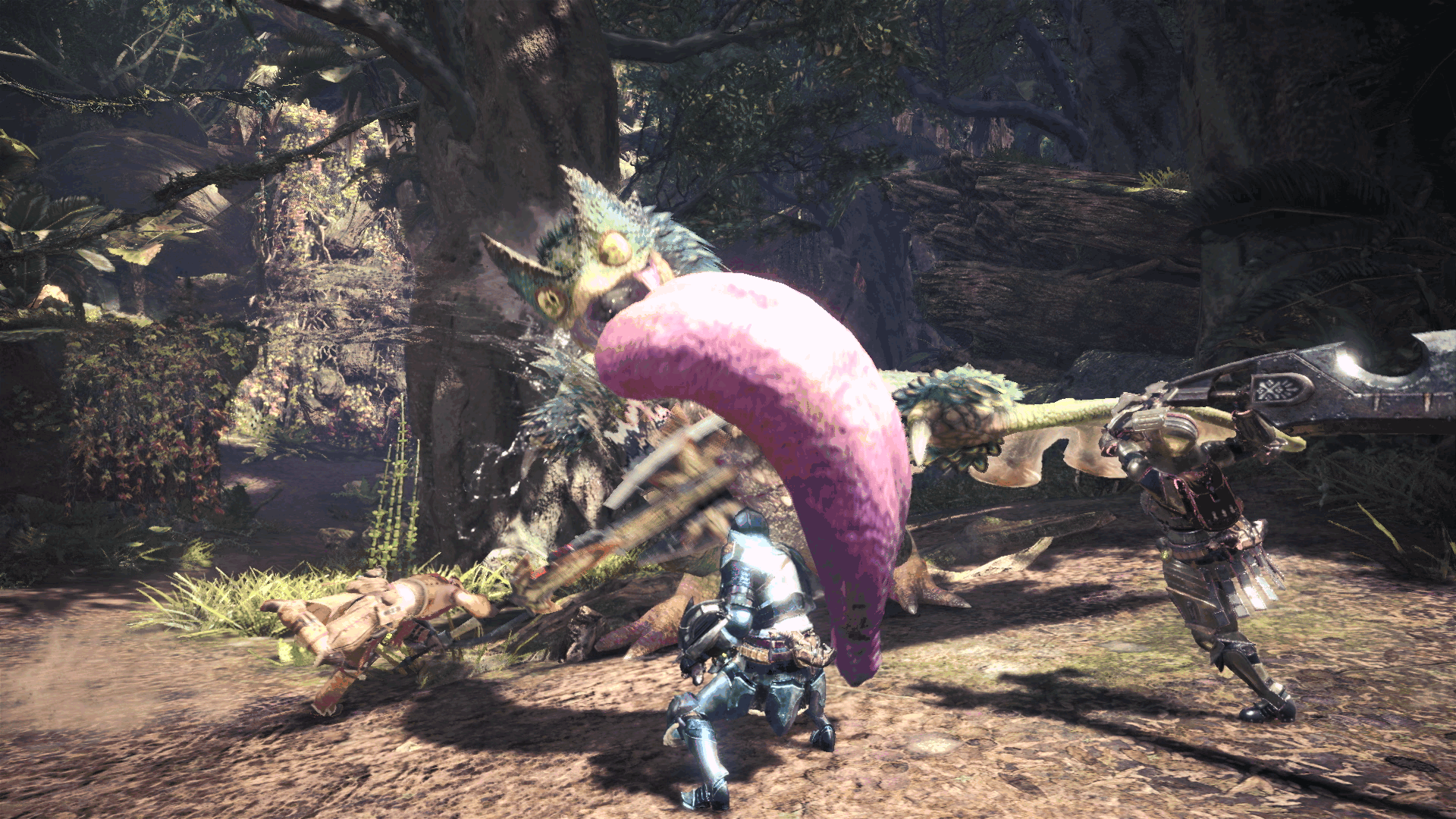 All of this is paired up with a more in-depth story, too. We're not really allowed to talk about this in detail, but the game begins with a big old action set-piece and there's a good amount of both voiced and unvoiced story work throughout. Your chipper partner-in-crime seems to be a fun character (though no doubt she'll grate on some), but more importantly the general sense of character around the monsters and world spreads also to many of the NPCs that appear to be major story players.

The narrative seems perfectly serviceable albeit unremarkable so far, and really it's only there to serve as justification for the game opening up new areas. It gives you a decent prod along its critical path for those who need it, but as mentioned earlier this game appears to be at its best when you take your time and meander, which is incredibly easy to do. There's still potential for an expansion of narrative scope as the game progresses, however, so I'm keen to see where exactly that goes. One minor story annoyance, incidentally: some missions have mid-mission cutscenes, and other players won't be able to join you until you've seen those scenes for the first time.

I've got a lot more to say about Monster Hunter World, and you'll see more from our extensive hands-on visit to Capcom over the coming weeks including video footage, interviews and more. For now, though, here's the headline you really need to know: Monster Hunter World looks and feels damn good. It at last feels like the Monster Hunter that could crack the Western mainstream without compromising what made the series great. I'm super excited to play more, and January can't come soon enough.