With Valve to show DOTA 2 at gamescom next week, Richard Cobbett explains the attraction of a genre variously known as MOBA, MMOARTS, and, of course, DOTA-clone. 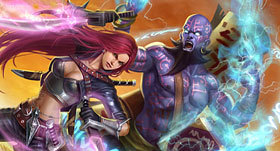 DOTA at a glance

Originated with the Warcraft III custom scenario, Defense of the Ancients, officially bundled with expansion The Frozen Throne.

Members of the development team went on to join League of Legends creator Riot Games and DOTA 2 developer Valve.

Currently led by League of Legends, one of the fastest-growing eSports in the world.

Get League of Legends for free. Ditto Heroes of Newerth, which is also very popular.

If you've yet to jump into the world of DOTA-style RTS, here are three reasons why it's worth it. At the moment, League of Legends - the most popular commercial version - has over 15 million registered players, with 1.4 million logging in on a daily basis. Both Blizzard and Valve are working on their own versions of the game, with Valve having hired one of the original mod's maintainers, and Blizzard planning on bringing all its main universes together into one glorious fangasm.

Finally, and most importantly, it's a fun twist on RTS action that you owe it to yourself to at least try - and with the most popular versions being free to play, there's no reason not to.

The original DOTA was a Warcraft III scenario called Defense of the Ancients, and while every version has its own characters, maps and tweaks on the formula, few deviate much from the premise. In short, players are split into two teams, in opposing corners of the map, with the rest of the space carved into lanes that directly link the two bases and more open forest areas to set traps and beat up neutral monsters as time permits.

The goal is obvious - to get to the enemy base and smash it. Each player controls a unique hero unit, which can be anything from a spell-slinging mage to a hammer wielding bruiser, with the goal being to storm over to the enemy base and smash it into tiny pieces. Heroes level up over the course of the round, unlocking new abilities, as well as earning gold to spend on new gear at their base's store. They're further backed up by a steady stream of AI creeps or minions that are constantly dispatched down the lanes to fight anything they bump into.

The result is a battle that no individual hero can win, with a focus on teamwork, and balancing the need to keep attacking, defending, and keeping ahead of the power curve. With so many games, it's no surprise that there's currently a squabble over what this subgenre should be called. Most fans just say 'DOTAs', but that has an obvious problem. Riot Games is pushing MOBA as a replacement, which technically stands for 'Multiplayer Online Battle Arena', but really means "Please stop talking about our competitor's game". The trouble with this is that it's not very specific. Funcom's Bloodline Champions for instance would seem to qualify, but is firmly arcade style PvP arena combat, and has little to do with the DOTA style.

The first standalone DOTA game was Gas Powered Games' Demigod, although its struggles at launch meant that it never really found its feet, and it's not worth paying to check it out when all the modern contenders are far more successful, free-to-play games. The two biggest are Riot Games' League of Legends and S2's Heroes of Newerth, with Petroglyph's Rise of Immortals currently in open beta, and Valve's official DOTA 2 due later this year. Blizzard's offering is going to be a Starcraft II map rather than a standalone game. It's currently in playtesting and expected to land at the same time as Heart of the Swarm.

Purists may scream at the suggestion, but you can't go wrong by picking League of Legends as your first DOTA experience. It's one of the most fun in terms of characters to play, with an excellent - albeit spectacularly patronising - tutorial to show you the ropes, and good enough bots to get comfortable with the game, even if you are likely to get crushed the first time you go up against actual human opponents in the field.

You can't go wrong by picking League of Legends as your first DOTA experience.

It doesn't hurt that its free-to-play mechanics are about the least objectionable around. Almost everything in the game that gives you direct gameplay advantages can bought with Influence Points earned by actually playing the game, and in many cases can't be bought with real-world cash at all. The only things you do have to purchase directly are extra, purely cosmetic skins for your favourite heroes, and boosts that award bonus XP and Influence Points after matches. Handy, but not essential.

The most likely things you'll end up buying are Champions - the hero units you take into battle. Every week, League of Legends makes ten of its eighty or so characters available for free-play, but exactly which ones depend on the luck of the draw. If you particularly want one of the others, like the flying gnome Corki, or your current favourite falls out of the rotation, you either need to work up a ton of IP by playing as other characters, or drop some cash to acquire them.

Prices for this vary, but in true everybody-but-Valve style, you can't simply buy as many Riot Points as you need to cover it. Instead, you're looking at £9 for enough DLC funbucks to pick up one of the standard heroes, which likely won't even leave you enough change for an alternate skin. A better option if you find yourself getting into the game is biting the bullet and buying a full bundle, like the Champions Pack (20 heroes for roughly £18) or Gamers Choice Pack (another 20, plus a skin, for £25), before looking into individual hero purchases.

S2's Heroes of Newerth stands alongside
League of Legends as a current leader
in the DOTA-clone space.

What you don't need to worry about is losing progress, regardless of whether you pay up. Heroes level up during matches, but are reset every time one starts. The global progression is a level higher, with your Summoner character stepping up the ranks, unlocking extra spells, climbing talent trees and acquiring runes to boost heroes' in-game stats - all of which can be swapped out and respecced for free as often as you like. Most of the game's variety comes from finding interesting ways that the many heroes can interact - especially as new characters show up on the roster to mix things up.

League of Legends was the first DOTA... sorry... "MOBA" game to hit it big, but won't be the last. We've seen little of Valve's offering yet, but only a fool would bet against it. The style is proven, guaranteeing many more flavours in the future - and that's no bad thing. It's a rare mod that can take a whole industry by storm, and with DOTA, strategy has its own Counter-Strike and Team Fortress 2 wrapped up into one shiny free-to-play ball. Find out why the world went crazy for it today.

Valve's DOTA 2 will debut at gamescom next week with a $1 million tournament. The competition will be streamed live on the game's website.