There are 74 million folks playing Minecraft on a monthly basis.

As of December 2017, Minecraft has over 75 million monthly active users and has sold over 144 million copies across all platforms.

Microsoft plans on keeping the player base happy while attracting new players to Minecraft through the new Aquatic update coming this spring, and the Super Duper Graphics pack.

There's also the Bedrock update for Switch which will introduce a Marketplace for textures, skins, and user-created Minecraft content.

The company is also continuing to concentrate on unifying the Minecraft community through cross-platform play via The Better Together Update.

Currently available on Xbox One, mobile, VR and Windows 10 devices, the Better Together Update will also be available sometime this year with the Nintendo Switch version of Minecraft, which was released in May 2017.

"All of our players are playing across a number of different devices and platforms, and it shouldn't matter where they're playing,"Microsoft's Head of Minecraft, Helen Chiang, told PopSugar. "What's important to us is that they have the opportunity to play it together, because it makes it so much more of a rich experience. That's the journey we're still on ... making Minecraft available to anybody, anywhere in the world, any way that they want to play." 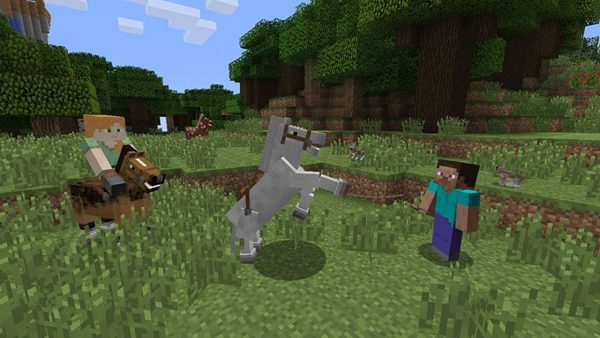 Unfortunately, Sony declined to be part of the Minecraft cross-platform incentive, but Microsoft still wants the company on board.

Despite PlayStation users being unable to play with users on Microsoft platforms, Minecraft players on Sony systems will still receive all updates to Minecraft - something Microsoft promised when it purchased Mojang in 2014 for $2.5 billion.