When talking about the design ethos behind Far Cry 2, creative director Clint Hocking uses the term “intentionality”. It’s where the player has a full understanding of a game’s interlocking systems, they devise a plan, then they attempt to carry out that plan with precision.

Many video games are about pure mechanical skill - nailing that bend in Forza, stringing together headshots in Call of Duty - but Far Cry 2 is built around planning, execution, then watching as other mechanics interrupt those plans, forcing you to adapt. Malaria attacks, jamming guns, and fire propagation are just some methods employed to add unpredictability to each encounter. Metro Exodus seemingly comes from the same school of thought.

Metro Exodus takes place across a post-apocalyptic Earth. You visit different biomes and interact with various groups of survivors, all while battling the elements and the mutated wildlife that has evolved on the surface while you’ve been hiding in Moscow’s metro tunnels. At any time, you can carry three weapons, a lighter, a torch, a portable charger, a physical map, a crafting station that doubles up as a backpack, a gas mask, gas mask filters, and more. Survival requires mastery of all this ramshackle gear, as well as the controls associated with them. 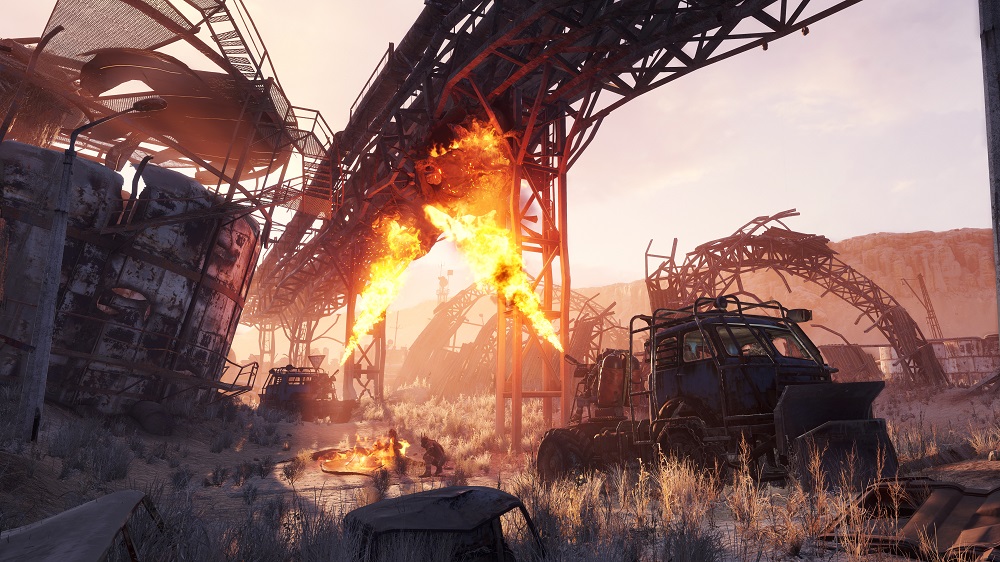 You must physically put on your gas mask when heading into a radioactive area. If you shoot an enemy up close, you have to wipe off the blood to see. If you take hits while wearing the mask, it may crack, forcing you to make a quick field repair by slapping a plaster on. Your weapons jam. Ammo is limited. Your torch needs to be charged to work and occasionally flickers and sputters out, enveloping you in shadow. Some weapons are pneumatic and require you to pump them up to keep them operational. No matter how solid your plans, they often come undone.

During a recent preview event, I got chance to check out three different areas of the game: The Volga (set during a snowswept Spring), The Caspian (an arid Summer setting), and The Taiga (set in Autumn). Each area is a snapshot of open world design, filled with secrets, collectables, and, most importantly, the freedom to plan. These quasi open worlds allow you to approach things how you want while also retaining the scripted thrills the Metro series is known for. In The Volga section, I get a taste of how the curated and the freeform interact.

The level kicks off with your train being brought to a halt by a barricade. A group of cultists have set up a church nearby and are preaching about the dangers of technology. I head off to see if I can get the parts needed to get the train moving again. As I explore, I’m set upon by a pack of mutated dogs. I soon run out of ammo, leaving me with multiple options: attempt to batter them to death with repeated pistol whips; see if I can group them together and take them out with my last molotov; or leg it. I leg it. 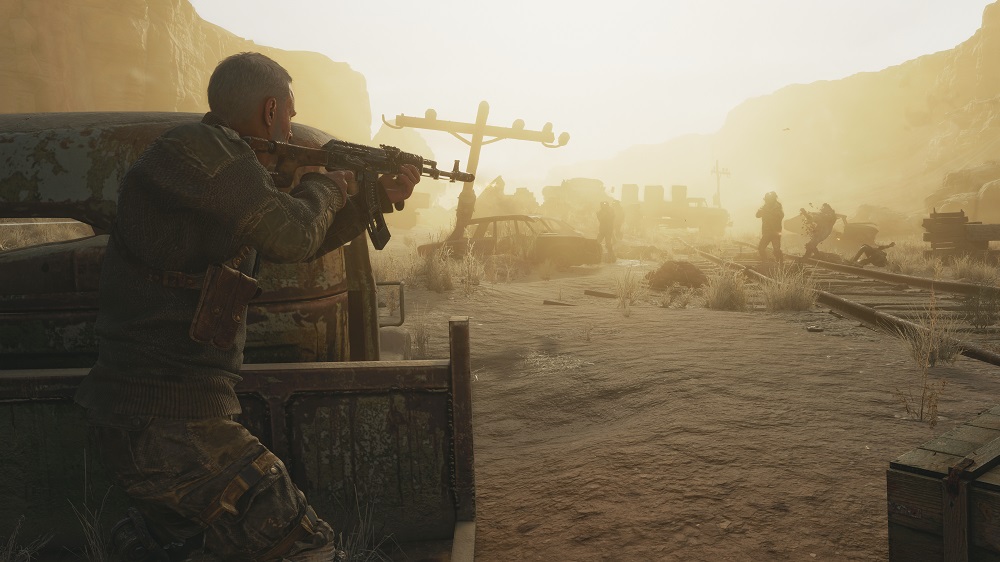 In another area of the same level, I’m using a canoe to get to the church as mutated lobsters dive into the water and snake around the boat. It foreshadows a later encounter with an even larger aquatic enemy in a scripted sequence. The sections between the objectives are completely open - in The Caspian, you explore the sandblasted landscape in a battered van as a dust storm nips at your exhaust - but things close up like the old Moscow tunnels often enough that it still feels unmistakably Metro. It feels like a perfect mix, but there are a couple of things holding it back.

Metro Exodus’s gunplay isn’t great on console. The last time I played it, I did so with a mouse and keyboard and pulling off headshots was a doddle. With a controller, it feels like an invisible hand is constantly nudging you off target. It feels by design - an attempt to make the gunplay feel scrappy and raw - but it’s frustrating when your two remaining bullets miss their mark. Going into a preview build halfway through the game - without having chance to build up your ammo reserves - only heightens that annoyance. Hopefully this isn’t such an issue when playing from the start. 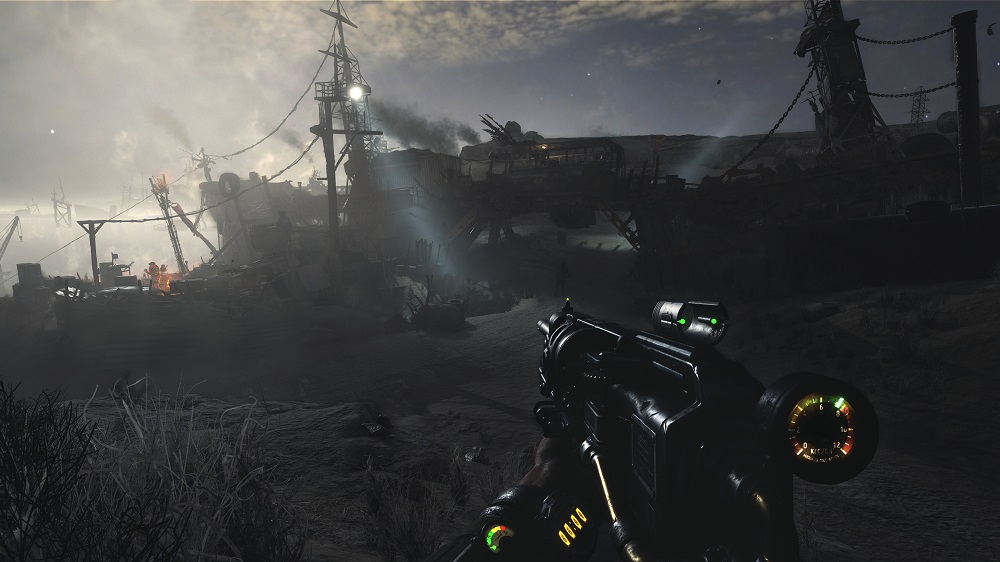 There’s no mistaking that this is built for PC, however. When I review it, I’ll be requesting PC not only for the mouse aiming, but also for the control system. Here’s an example of what it’s like to play on a controller: down on the d-pad changes your gas mask filter, while holding it puts on and removes your gas mask; left on the d-pad turns on your flashlight, while holding it pulls out your charger; right on the d-pad checks your geiger counter, while holding it holsters your weapon. Hold RB and all of the functions of the d-pad change again. Hold LB and the face buttons change functionality. X is reload, but it’s also your lighter. Hold X while wielding a pneumatic weapon and pump on the right trigger - which is also shoot - to power it up. It’s like playing finger twister.

I’m sure this complexity becomes more manageable as you play, but it’s bound to stop the game connecting with a more mainstream audience. It’s a hardcore PC game through and through.

One thing the Metro games have always done well is immersion, with simple acts such as gun jamming and wiping your gas mask making you feel connected to protagonist Artyom. You feel like you inhabit a person, the world looks incredible, and the genre-leading sound design locks you into the role. The only thing that might pull you out is when you’re forced to check the controls to perform a simple action. Just like with Far Cry 2, some of Metro Exodus’ best moments are born out of an intentional frustration, marrying the gameplay with the themes of the story and setting. It works, but experiences are going to vary wildly.