Metal Gear Solid:Ground Zeroes' open world and base-building features have been discussed by Hideo Kojima at Eurogamer Expo. VG247's Dave Cook was there to learn more.

Metal Gear turned 25 this year. That's a hell of a long time for a franchise to sustain without completely going off the rails, even if many gamers consider the second game to be a bit of a wobble.

Staying power like that doesn't just happen overnight, so something is clearly working. But in Metal Gear Solid: Ground Zeroes, series creator Hideo Kojima has opted to change the format and base his next game in an open world setting.

It's a gamble, but from what we've seen and heard, fans needn't worry. After Metal Gear Solid: Ground Zeroes was revealed at a recent 25th anniversary event, the internet hype that followed proved that fans have welcomed the idea.

With his Japanese tour out of the way, Kojima headed West to Eurogamer Expo and publicly showcased Metal Gear Solid: Ground Zeroes. VG247 was there, hiding under a cardboard box to hear everything he had to say about it. 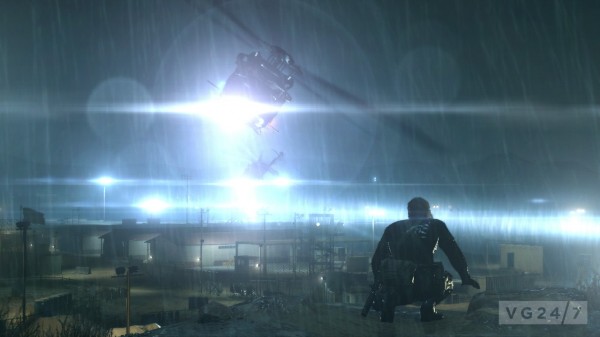 Kojima opened his presentation by showing off the same cut-scene and gameplay footage that he unveiled in Japan, except this time, and seeing it with your own eyes, it's clear that Kojima Productions is looking far into the future with FOX Engine.

The visuals are superb, and as Kojima explains, his studio had to make some concessions in bringing the game to current formats. "Being an open world game we realised that we had to make some sacrifices with the graphics to fit it all in there, but one thing we are focusing on is lighting."

Seeing the game running in real-time, it's clear that the lighting engine has been meticulously designed to impact on gameplay. We're not just talking about enemy spotlights following more organic routes - rather than static patterns - but in a much subtler capacity.

As Snake crawls towards a sprawling military compound, an armoured truck can be seen circling the perimeter, and as it faces the player's direction, the lens flare makes the screen light up.

It hampers Snake's vision, making the rest of the terrain and enemies harder to see. So for the first time actual, dynamic lighting really will force you carefully consider your surroundings. You don't want to run into a pack of guards you couldn't see due to being blinded, after all.

It's an open world game, and Kojima is quick to point out just how much freedom this will give players, "because it's open world you can move freely, and infiltrate the base any way you want. But this area here is just a prologue of the game."

"You can call in a chopper any time, anywhere you want," Kojima continued, "and the way the game system will work, is that when you call in a helicopter, you can return back to your base, or head to another mission. It is also possible to use helicopters for support as well." 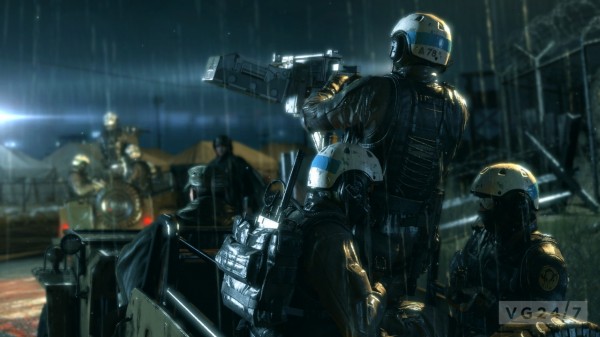 That's right, bases are back. Similar to Metal Gear Solid: Peace Walker, Snake will have a base that he can return to after missions, and it's here he will regroup, research new weapons, fortify his defences and more. Best of all, you can walk around it in real-time.

Kojima revealed that the game's base-building element could go hand-in-hand with smartphone integration, Kojima reflected on the base-building element of Metal gear Solid: Peace Walker, "We liked the concept of developing weapons and creating new things at your base, and how that influenced the gameplay."

"That was a really cool idea," Kojima continued, "and something that was very popular. Furthermore, nowadays they're making new ways to access games. You're not just playing on your game console, you can also access them from your cellphone and other devices to access that same game."

Kojima added, "So I think that type of 'Mother Base' system would work very well in that kind of system, and it's something we're planning on in Metal Gear Solid: Ground Zeroes. I can't reveal too much about what happens after you get in your chopper, but you get in and fly to your base."

"Then you can walk around your base all in real-time," Kojima continued, "it's the base that you create. But if you want to focus more on the main missions, you can do that, so you don't have to customise the base if you don't want to."

Base-building, an open world and all of the research elements from Metal Gear Solid: Peace Walker all amount to one huge experience, and we're only just scratching the surface of its world. 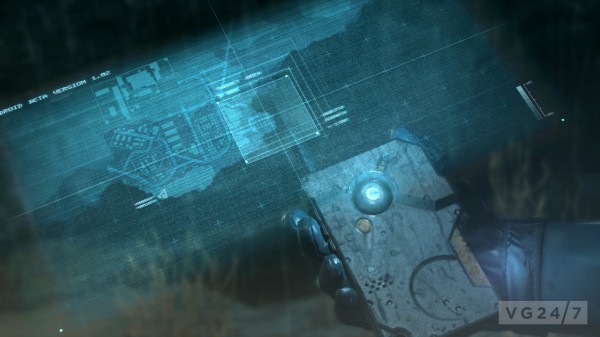 But just how big is that open world? Kojima couldn't give us specifics but he did shed some light on how the environments will co-exist. Using the chopper as a means of fast-travel, you Snake is ferried between each of the game's open worlds. You can also project a map in first-person from Snake's radar device and look at it at will.

So it's not actually one big open world like Skyrim - instead - it's a interconnected selection of environments. "This particular stage is a small sample of the open world we have in mind," Kojima explained, "and again, this is just a prologue. But what happens is that there will be larger open worlds, and you can use the helicopter between those open world stages."

"You have to be careful about where you call the chopper, because if it gets spotted it can be shot down," Kojima added, as the helicopter starts to land while blasting out Ride of the Valkyries. It's a nice touch, and the dynamic wind effects as the vehicle lands looks superb, whipping foliage around violently.

Metal Gear Solid: Ground Zeroes will also feature a day-night cycle, but it isn't scripted, and gameplay will be affected by what time it is, "Later on in the game, time will pas in real-time," Kojima explained, "so depending on how you travel between one stage to the next, that travel time will effect the time of day when you arrive at your destination."

"The sun will travel across the sky,"Kojima added, "and that will create subtle differences in gameplay when approaching a base, if it's first thing in the morning, noon or later in the day." We're intrigued to learn more about how things will change, but Kojima wasn't keen to go into much more detail.

Metal Gear Solid: Ground Zeroes is already looking impressive, and given the nature of Kojima's output, we're certain there will be many more secrets and details yet to come, and as always VG247 will be on-hand to bring them all to you. Stay tuned.