Metal: Hellsinger is a rhythm shooter where you kill to the beat of a drum. It's heavy.

A fusion of first-person shooter and on-beat rhythm action, you charge through the gates of hell with a sword and a skull, pumping the latter to the stomp of the bass drum, building up your score multiplier as well as your special.

Continue to keep the time with shots, slices and kills and your multiplier rises - and so does the soundtrack. From a simple beat and tingling guitar to heavy riffs and thunderous drums - eventually hitting all-out screaming vocals when you finally punch the maximum multiplier. The soundtrack you're listening to builds up as you kill, but drop too many beats and it'll wind down again. When it all begins to kick off and the metal is booming, the music helps get into a groove with kills, a chugging encouragement of rock.

It's intoxicating when you're in the moment, and jarring when you drop your concentration or miss a beat. It's surprisingly hard to do all the usual moves you'd expect from a first-person shooter - move swiftly around an arena, dodge, take flight, strike, shoot, kill - while keeping in time to the beat. You're learning a new skill on top of all of that and you have to accept early on that you can't stay on beat all the time and play it your way. It's not like Guitar Hero in that sense. You'll have to improvise around the soundtrack if you want to clear spawning enemies and stay alive. With practise it works, but there's little respite. 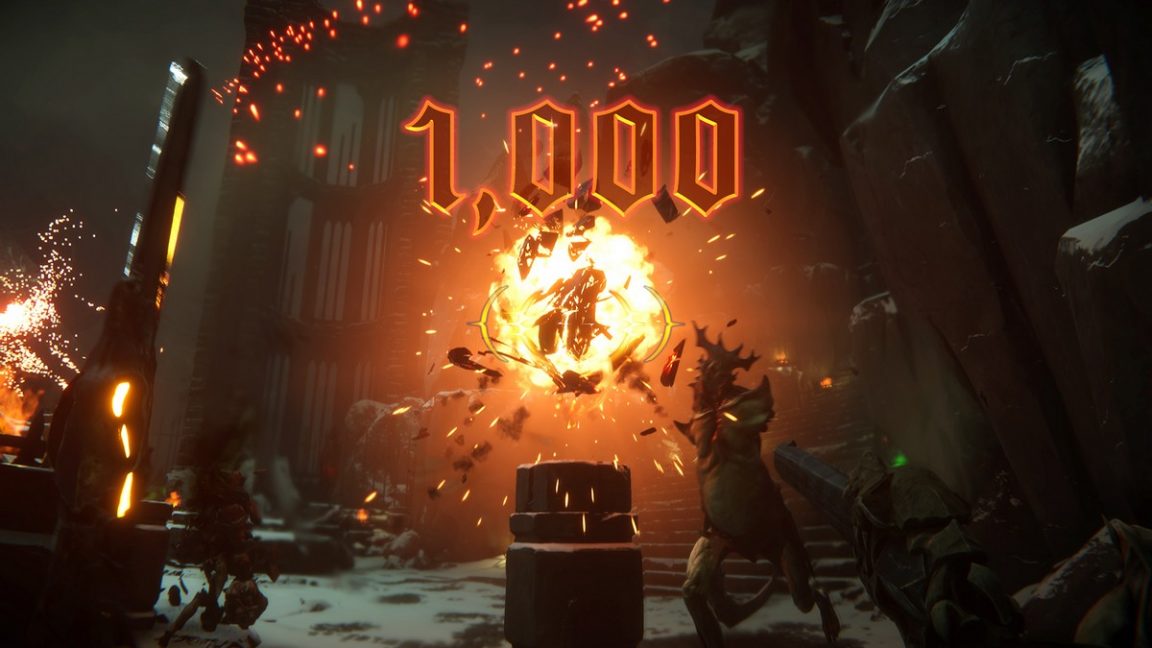 That's probably a design decision - there's nothing subtle about a musical genre that dresses in corpse paint, leather and spikes, and nothing subtle about a shooter where you hack the denizens of hell to pieces. You won't see Slayer sitting back mid-gig for a quick glass of milk and a look around the stadium, and you don't get that luxury either. There's a storyline as you take on the role of The Unknown, hunting down The Red Judge in a tale of revenge, but we're not here for that. We're here to kill with a rewarding power chord. I'd throw up the horns but I don't want to lose my multiplier.

The setting is familiar - it's Doom, basically. That's nothing to be ashamed of when you're influenced by one of the true originators and greats. Developer The Outsiders is looking to go beyond the classic fire and flames depictions, twisting the shape of hell with cityscapes and snow, but you really won't get much time to take it in when Soilwork's Bjorn Strid is screaming into your lugholes.

The soundtrack is a major pull, obviously, and alongside Soilwork you'll hear the vocals of Trivium's Matt Heafy, Mikael Stanne of Dark Tranquillity, Alissa White-Gluz from Arch Enemy, and more to be announced. There's no licensed music here - it's all created by The Outsiders team with the familiar vocals laid on top. The music is designed for gameplay primarily, and given the same attention to detail as level or character design. Dynamic soundtracks on action games that increase the intensity as more enemies flood the room are common, but Hellsinger's soundtrack is a direct response to how well you're playing and encouraging audio assistance simultaneously. You can be surrounded by the most lethal demons in hell, but if you haven't been pumping to the beat you're killing to what sounds like a soft rock, and that ain't cool. After Bethesda fumbled the soundtrack for Doom Eternal earlier this year, Hellsinger sounds like it's your chance to really get down and dirty in the pit.

The Outsiders is led by David Goldfarb, previously game director on Payday 2, lead designer on Battlefield 3 and Battlefield: Bad Company 2. The shooter pedigree is in place and there's a clear love and respect for the music. Less than 12 months old, Metal: Hellsinger is a passion project that can hopefully reach a wider audience outside of its targeted niche.