Metal Gear Rising: Revengeance is out today in the States. Does it live up to Kojima Productions' legacy? Dave Cook slashes his way through it to find out. 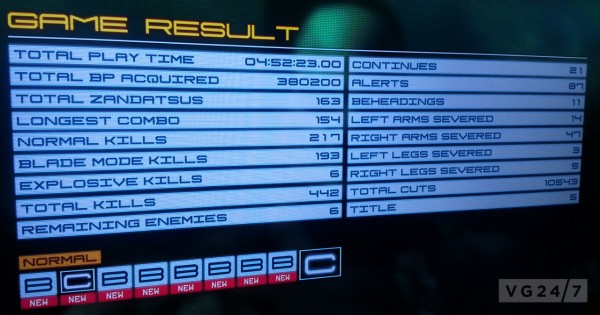 I finished Metal Gear Rising: Revengeance at the weekend. It took me just four hours, 52 minutes and 23 seconds to complete on normal mode, minus cut-scenes and deaths. The proof is above.

That's a photo of my end-game report. I died 21 times during the campaign and still managed to cross the finish line in under five hours. I should be highly critical right now, but I'm not complaining in the slightest.

In fact, I thoroughly enjoyed this game. You will too.

Just like Platinum's insane shooter Vanquish, I felt that the Revengeance campaign came in at the perfect length. However, I should point out that Brenna's play-through was around the six-hour mark.

The game starts off with a bang and keeps pinging along at a steady beat, spiking occasionally thanks to mind-boggling set pieces and well-crafted boss battles. It's hard to get bored with a title that's this bat-shit mental and fun for the duration.

Nothing feels like filler and no moment is wasted as Raiden battles the Desperado group - a band of cyborg mercenaries trying to kick-start the war economy after the fall of The Patriots in Metal Gear Solid 4.

Although its not as tactical as Platinum's impeccable brawler Bayonetta, the whole elevator pitch of Metal Gear Rising: Revengeance was to make anyone feel as badass as Raiden looked in this infamous Metal Gear Solid 4 cut-scene:


Thanks to BigBoss712 for the clip.

Platinum Games and Kojima Productions wants you to play this, not just watch it. If that was the goal, then both parties have exceeded expectation. What that means however, is that tactical fighting has been whittled down to spammy show-boating on lower difficulty tiers.

The core of Revengeance is its combat mechanic, and it's shallow when compared to Bayonetta. Here, you can unleash Raiden's high-frequency blade by hammering the light attack button, and use a secondary weapon by inputting heavy attack commands.

Secondary weapons are picked up after defeating bosses, such as Monsoon's tactial Sai blades and Mistral's L'Etranger polearm - which is my personal favourite due to its superb crowd-control range. The problem is that you can only switch heavy weapons in the mid-stage menu, not during combat.

Those looking for an experience closer to Bayonetta should start on hard mode, because this is where capable parrying and smart strikes become crucial. The parry system is simple, requiring you to press towards an incoming blow and light attack at the same time.

Simple, yes, but it's brilliantly executed, just like Street Fighter III's parry system, which requires players to press forward into an attack. The risk-reward mechanic underneath delivers a huge, gratifying pay-off. Fuck up and you get hurt hard, but succeed and you feel accomplished.

Parrying can also open 'Blade Mode' windows. Once Raiden's battery gauge hits a certain level, triggering this mode will see the action slow to a crawl, giving him a chance to slice foes to pieces. Line up a swipe carefully and you can hack open enemies, exposing their electrolyte core.

Raiden can grab these cores and smash them, which tops up his health and battery power in an instant. It's what the game refers to as 'Zandatsu' or, 'Cut-and-take.' Swipe wildly and you'll destroy the core, losing your health boost in the process.

It's a neat mechanic, however it's only forced in a few instances. During a battle with hulking boss Sundowner, you have to swipe specific lines through his explosive shield to avoid taking damage. It's a neat example of Blade Mode put to crucial use, but these moments are fleeting.

I can't complain about any of the above, because when you take any ten minute section of gameplay, chances are you've hurled Metal Gear Gekkos around like toys, ran across a salvo of rockets like a makeshift walkway and carved many men into tiny, bloody chunks. It's chaos from start to finish. 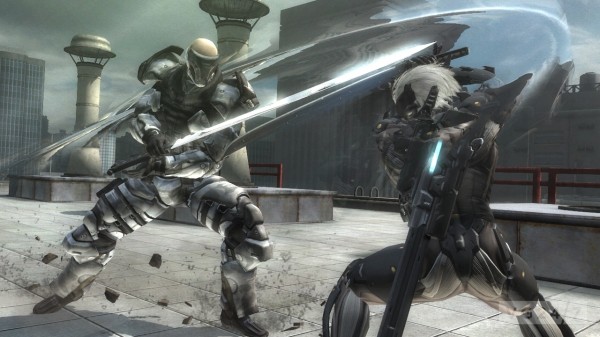 Does Revengeance feel like a Metal Gear game? Yes, but obviously the pacing is entirely different. The weird thing is, you can play this game using stealth if you want, as Raiden's Soliton radar maps foes, making it easy to sneak up for a stealth kill using cardboard boxes or oil drums.

There are Codec discussions, hidden posters of Japanese supermodels, alert phases and the classic "!" noise whenever Raiden is exposed. If you're a fan of the series then you will appreciate Platinum's nods to Metal Gear Solid 4, but I'm thankful they didn't shoe-horn too many references in there. It would have felt cheap.

Instead, Revengeance feels like its own game, and tees off what could be a new story arc in its own right. Despite my rapid play-through, the game is full of hidden secrets, and your levelling carries over into subsequent campaigns, meaning you can replay until you've unlocked everything. You will feel compelled to do so.

It may not have the tactical combat of Bayonetta or even the Devil May Cry series, but depth was never this game's objective. Raiden's combat is all about style and empowerment, and that's a double-sentiment that come across tangibly throughout.

Anyone who has grinned while slam-dunking missiles onto 50-foot tall mechas in Vanquish will know what I mean within the first ten minutes of playing Revengeance. You'll be glad to know that the campaign is that one moment, looped over and over for five hours.

Disclosure: To assist in writing this article, Konami sent Dave a copy of Metal Gear Rising: Revengeance on Xbox 360.