How to solve the water tanks puzzle and defeat The Maw in The Medium.

If you're playing through Bloober Team's atmospheric horror game, The Medium, you'll know it has many puzzles. These puzzles ramp up towards the end of the game, with a tricky door code to work out and a more complex water tanks puzzle that's set in a pump station.

We've got the solution that will allow Marianne to make it through the pump station, clearing the stairways that were flooded and opening the impassable door.

The pump station control room, once power has been restored, is where we'll begin this guide as it's the only tricky part of this section of the game. When you view the control panel you'll see that there are five representations of water tanks. These can be empty, half-full, or full. The buttons next to each direct the water flow left or right between connected tanks.

When you begin only the top tanks can be used, with the bottom two needing to be opened up.

Firstly, direct all water to the top right and top middle tanks. See the image below for how it should look. 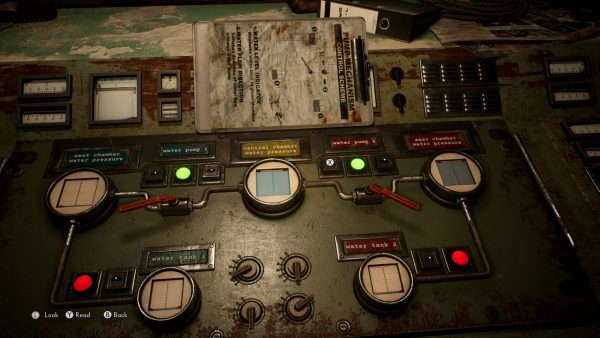 Once done, head left out the pump room, then down the stairs that were previously blocked by water. Use the energy shield to protect spirit world Marianne from the moths. Once through, turn the crank to open up that water tank. Once that's done, head round to turn the electric off using the switch that you used earlier before starting this puzzle, and walk through to the pump station control room.

Now direct all water into the top left and top middle tanks. 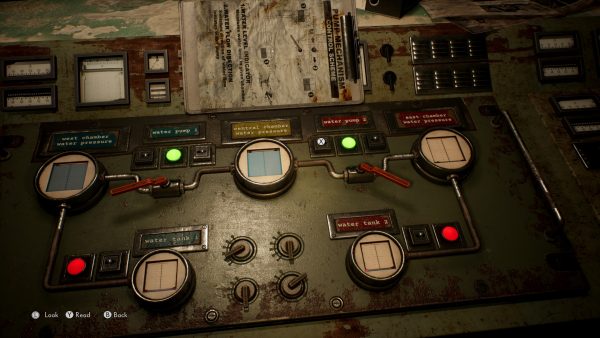 Head right, back past the electric switch that you turned off. Go down the stairs when you can. You'll see an energy recharge point that can be accessed via an out of body experience. Walk beyond this and you'll reach the next crank location. It's missing, but thankfully a locker up ahead can be opened to obtain it. Return to fit the missing crank, turn it, and then head back to the pump room.

You're now ready to move water around for the final time. Empty the top middle and top right tanks by moving the water left from the middle and right from the top right. Then head right and down to where you just turned the crank. Go to the door beyond the locker where you found the crank and you will clear this section.

How to get past The Maw after the pump station puzzle

Immediately following the pump station, Marianne comes face to face with The Maw once again. At first this section seems incredibly tough, with Marianne stuck in the room with The Maw with nowhere to go.

The key to getting past The Maw is to remember you can go out of your body and control just the spirit world version of Marianne.

Start an out of body experience, and immediately run through the door on the opposite side of the room to where you are stood. The Maw will follow spirit Marianne, so keep running until you reach the end of the corridor. At this point you should see a button prompt (on Xbox this is "B"). Press the button and you'll return control to Marianne in the real world.

As normal world Marianne, run to the end of the room and turn on the electric. This will electrify the floor and result in The Maw getting a large dose through him. He's defeated and Marianne can continue.

For more on The Medium, here's our interview with developer Bloober Team speaking about their role in creating this next-gen Microsoft exclusive.

Head elsewhere for our The Medium review, door code number, and how to solve the vase puzzle.