Brenna Hillier is so bad at shooters that when she goes on vacation the average KDR of Sydney goes up significantly. Who better to preview Medal of Honor: Warfighter? 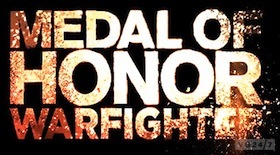 The follow-up to last year's reboot of the venerable franchise, also developed by Danger Close.

DICE lent a hand with last year's offering, but this one's all in-house; Danger Close has gone the patriotic route by offering operators from a dozen nation's Tier 1 organisations.

EA has said it's happy to foster different audiences with Battlefield and Medal of Honor - but Warfighter comes with access to the BF4 beta.

"Please don't start your client until the server is online, so we can buddy you up with your deskmate," an EA representative advised us.

I hammered the escape key guiltily while my would-be buddy snickered. (He'd get his when his A key wigged out halfway through a match, leaving him scuttling crab-like around the map.)

This was the start of my Medal of Honor: Warfighter experience - I had already misunderstood (or completely ignored) an instruction and both embarrassed and inconvenienced everyone. I sulked, slinking lower in my chair and determining to steal as many of EA's Coke Zeros and florentines as I could to make up for this indignity.

"Are you really that shit at shooters?" my friend asked.

Yes, I bloody well am. I point my army man around the map like a truck; the cross hair is a steering wheel rather than a weapon. When I spot an enemy I have to frantically mouse for him rather than being already positioned at head height. I can never remember what the different classes do, or how to use their special abilities, and I've never, ever learned to be a team player or how not to get shot in the back. I am the Worst at Shooters. It's a thing.

Warfighter doesn't seem like a particularly great place to get on board. It's not for people like me, a little bit baffled and nervous.

For one thing, and I say this with genuine love, it's kind of too beautiful. EA seemed to have set us up on beastly gaming rigs, presumably with all the options turned up to 11, and the detail of Pirate Town was quite overwhelming. I kept stopping to look at the flickering shadows in a narrow stairwell lit by a flare, or gazing out over the ocean, when I should have been sprinting to cover. For a military shooter, Warfighter is packing some serious colours. An overturned boat on the beach near the south end of the map. Brightly painted doors. Fluttering vegetation and a Mediterranean sky. It's a nice break for the greys-and-browns, although naturally they have a strong presence.

EA kitted us out with some decent headsets so the sensual assault could hits us more efficiently, from more than one organ. On those rare instances when I wasn't hearing the rapid tat-tat of MCV Pacific headshotting me with his ridiculously powerful rice krispie gun again or the deep thunder of my Canadian heavy's arm-cannon completely failing to hit anybody or anything, someone was calling in an air assault so very present that I wanted to hide under the desk, or bringing in a Black Hawk to fill the sky with furious confusion.

Pirate Town is an absolute warren of paths, leaving you plenty of scope to sneak across the map and never see anybody at all – but the map itself is so intimately sized that it’ll only take the enemy three seconds to come find you.

But let's assume you don't suffer some kind of kinaesthetic meltdown in the face of fancy graphics and sound design; Warfighter is still pretty impenetrable. Pirate Town is an absolute warren of paths, leaving you plenty of scope to sneak across the map and never see anybody at all - but the map itself is so intimately sized that it'll only take the enemy three seconds to come find you. We were playing a capture the flag mode with three zones to hold, and it didn't matter how stealthily you approached a hotzone - once you were in it, you'd be swamped in moments. There was little room or time to set up cross-fire zones or line synergistic classes up to support each other. You'd just end up half a dozen blokes like a fish in a barrel. It seems a waste of some of the more interesting abilities, like the one where you use a helicopter to set up a new spawn point - you're only going to appear half a second from your destination.

Perhaps to compensate for the small scale of the battlefield, our fellows didn't seem to move along at a spanking pace, or even to aim very quickly - although that might have been me, let's face it. But even at full sprint, my assault class guy wasn't exactly nimble, and neither the heavy nor light classes seemed to offer a significant change of pace.

This ponderousness extended to recovering from setbacks, too. The buddy system is supposed to mean you can respawn immediately with your mates, but your buddy needs to be out of sight for the length of a cooldown bar for it to work. With everyone on top of each other, this almost never happened. Regenerating health took a heck of a long time, too - I know PC elitists sometimes sneer at the "console" mechanism of quickly-regenerating health, but every bullet seemed to reduce my fellow to near death, after which he'd have to take a nap for a good 20 seconds. I kept running out of Coke because I had so much time to drink it in.

So on the one hand, the action is so rapid and intense there's barely time to think, and on the other, things seemed a little clunky and unresponsive. It's a bad combination for a beginner like myself, and combined with an apparent emphasis on team-based played and a system of special abilities, it's pretty clear that Warfighter caters to an established shooter crowd.

But that's what the established shooter crowd wants, right? It may be amazing. I can't judge. It is extremely pretty, though.

Medal of Honor: Warfighter arrives on PC, PlayStation 3 and Xbox 360 in November. My hot tip: if you hammer the prone key it looks like you're breakdancing.