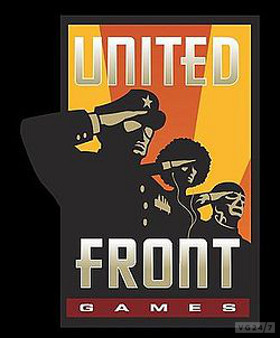 Formed in Vancouver, Canada in 2007, and is currently one of the largest independent developers in the region.

The studio was developing True Crime: Hong Kong under publisher Activision. The game was quietly dropped and snapped up by Square-Enix under the new name Sleeping Dogs. It launched in August 2012.

Releasing a LittleBigPlanet game with the word 'Karting' on the end smacks of a cheap spin-off experience. After-all, karting is one of many go-to genres that publishers exploit whenever interest in a brand starts to wane, or when companies simply want to make a fast buck.

But LittleBigPlanet Karting is different because it's not just a racing game. In fact, just like Media Molecule's core titles, players can use the game's creation tools to make anything they want - from first-person shooters to puzzle games. It's entirely what you want it to be.

Building on its experience with the Modnation Racers series, developer United Front games is absolutely buzzing right now. Only a few years ago it stared into the abyss with the cancellation of True Crime: Hong Kong, only to see the game saved by Square-Enix and turned into a great success as Sleeping Dogs.

Not only that, it's working on the LittleBigPlanet brand and in close collaboration with series creators Media Molecule. VG247 spoke with the games's producer Jen Timms about how the studio feels about hitting such a sweet spot.

VG247: You recently scored a hit with a new IP in Sleeping Dogs, and now United Front is working with Media Molecule on one of the biggest IPs of the generation, How does it feel to be rubbing shoulders with such an influential and respected studio?

Jen Timms: We worked together a lot. This really is a true partnership. I mean, Sackboy is their baby, they entrusted him to us, and that's a huge honour, one that we don't take lightly. We've been giving them builds from day one and they've given us feedback on how to keep that real Craftworld flavour and new ideas of what we can do.

”We only wanted to do this if we knew we could do it right, and of course, Media Molecule felt the same way.”

At the end of the day we are karting developers. We're experts on it, it's what we know and that's what we get to bring to the mix. It's a real balancing act because these two things have such huge fan bases, and you do not want to do either of them an injustice by bringing them together.

We only wanted to do this if we knew we could do it right, and of course Media Molecule felt the same way. They wouldn't take a risk on something like this if they didn't think we could pull it off, and we're so happy with how it's turned out because it's so powerful and fun. I really can't wait for the world to get its hands on it just to see what they do with it. 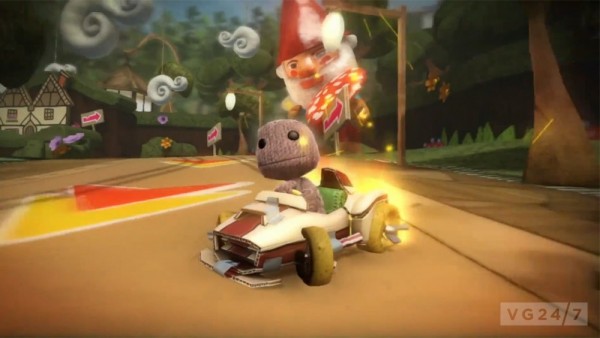 Sackboy. Always a pleasure to see you good sir.

How did the collaboration come about?

We worked with Sony before under the 'Play, Create, Share' brand with ModNation Racers, and we shared that moniker with Media Molecule and LittleBigPlanet. It didn't take long for us to work out that this was a logical place for Sackboy to go.

He was previously seen in platform games that were also a platform for games of other genres, but he's never been seen in a kart before - which is a whole genre that is so well known and loved by many gamers already.

So it really was a natural progression to put him in a kart and to have him drive around and explore these beautiful worlds at high speeds, and this time making them 3D worlds.

Although it is a racing game, just how much scope for creation is in there?

Well we have our whole story mode with seven different planets - some of them will be familiar to you from prior games, and others are actually brand new. But everything we've created to make the story mode, we've used the same creation tools we give you in the editor, just like in Media Molecule's LittleBigPlanet games. So you can create your own levels entirely.

How much of your ModNation tech is driving those creation tools?

The best part is that ModNation Racers was such a traditional karting game that focused on races, battles and for the first time you can customise those things. So we've taken everything that we learned from that - it's our bread and butter - as those are such important things to get right in a karting game.

It was a case of taking that experience and putting it into whole new worlds with so many new things to see and do, then to just expand on it. It's not just about creating races and battles, as you have all of the logic, gadgets and tools to make any kind of gameplay that you imagine possible.

We've already seen some amazing examples of this from our public beta that the community has created. It was everything from minigames and arcade-style games that aren't even karting at all, to someone even creating an FPS in the game.

It can go as far as FPS games then?

Oh god yeah. This is a great example of the power of how these tools can combine to make completely different things. So yeah you can make a first-person shooter, your own custom objects - in this case it could be a hand with a gun - and then you have the ability to control the handling and physics of that.

You also have the ability to re-map buttons, or change your abilities, and then you can combine that with the Weaponator gadget that lets you make custom weapons. Then you can make bullets, or even like rainbow trails or flowers that come out the end of the gun - anything you want, and we can give you that power. 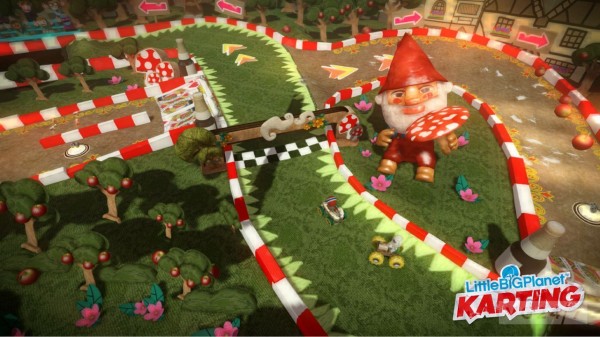 The track editor is awesome. FEEL THE POWER!

And with so much content being created already, you will obviously be looking to nurture the community from launch.

Yeah, and we really enjoy being able to bring together two whole worlds. The LittleBigPlanet franchise really is a whole new genre in itself, it really is, as it delivers a whole new idea of customisation that can be mind-blowing. So we're really enjoying merging that genre together with the karting genre that we all grew up with.

There's a very big cross section of people who love the LittleBigPlanet games and karting games, so it really caters for them well.

The LittleBigPlanet community always caught Media Molecule by surprise through the content it created or in certain trends that emerged among players. Did anything surprise you during the beta?

We had a lot of feedback, but one of the biggest things is that people love that karting competition in multiplayer, and that's something we haven't seen in the LittleBigPlanet world before, as it was generally focused around co-op or single player.

What I think is great is that in this generation, people can just pick up a game with these kinds of tools already in them, and become creative themselves.”

So that was a first for this genre, so one of the things that we learned was that people just want to jump in and play, they don't want to be finding their way through menus - especially if they're playing online with other people.

We then decided to add a 'Quick-Play' button to our main menu so that you can just get matched into the next game that's about to start online with the most amount of people, and get playing straight away.

The other thing we did is that once a race is over - and say you had a lot of fun, it was fast paced, but someone pipped you at the post at the last minute and you want to get back in there and kick their butt - we added a level voting feature.

It comes up at the end of a race with a selection of where you could go next, and that gives you a mix of story levels and community levels too.

Oh, so even player-created levels are included in the online multiplayer rotation?

Yeah absolutely, and as a group you all have a chance to vote and have a say in where you go next. It sort of creates this loop of karting games you can play, which is a never-ending loop of fun, fresh content.

Karting games are like that though right? You're never finished once you complete the story mode, you play multiplayer after, and in LittleBigPlanet where millions of levels have been made by the community, there will be so much content on offer. 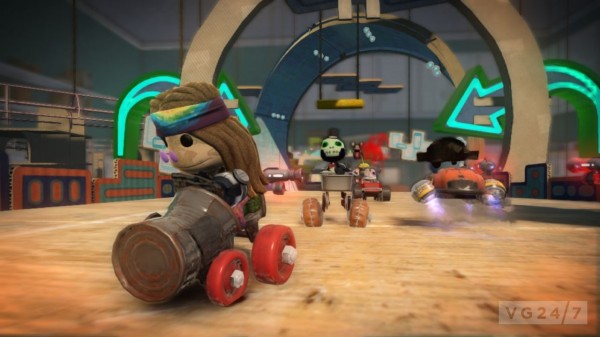 It's typical LittleBigPlanet - big, creative and oodles of fun.

So once LittleBigPlanet Karting is out the gate, will you look to keep making games under the 'Play, Create, Share banner?

Yes, and what I think is great is that in this generation, people can just pick up a game with these kinds of tools already in them, and become creative themselves. Some of them may realise that game creation is a viable career you know?

You could be a designer, get recognised and start making games in your own right. People can now make these things for educational purposes, for fun and it's just so powerful as a format.

I have to touch briefly on Sleeping Dogs because that was a huge success story for you guys. It was almost scrapped as True Crime: Hong Kong, but then it bounced back and took the top spot of the UK charts for weeks. How gratifying was it to see the game finally launch and hit those kind of sales?

It’s been tough for the studio as a whole at some points, but it’s so great because they were sitting on something they knew was really, really good, and we had the talent, the ability and the know-how.

It was so good to just see the benefits of that now that it’s out there in the real world, and as a studio it’s just such an exciting time to have such great games that are completely diverse coming out.

Both [Sleeping Dogs and LittleBigPlanet Karting] will have launched in in the latter half of this year after a lot of tears and a lot of hard work. We’re just so happy that it’s done so well, and that’s really just exciting.

Many commentators, such as EA's Frank Gibeau has warned that launching new IP like Sleeping Dogs so late in a console cycle is a bad idea, yet Sleeping Dogs belied that statement entirely. Is it really that much of a risk?

You do take risks, but that’s what we do as game developers right? We have our ideas, we want to get them out there and then we want to work on something new. That’s what it’s all about and unfortunately we don’t always get the opportunity to do that because of the climate of the industry right now."

"But when you are an independent triple-a studio like we are – one of the few left around, especially in Vancouver – it’s not something you take lightly. We’re very proud and feel lucky of the fact that we do what we do.

Hopefully with the success of Sleeping Dogs and hopefully the success of LittleBigPlanet Karting, we’ll get the ability to do more of that in future.