Lightning Returns: Final Fantasy 13 is the final chapter in the Fabula Nova Crystallis saga. Dave Cook speaks with director Motomu Toriyama to see if Square can deliver a fitting conclusion. 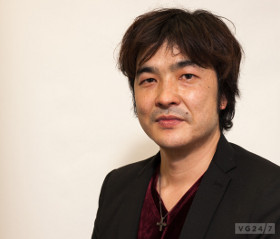 Toriyama is director of the Fabula Nova Crystallis saga, which began with Final Fantasy XIII. The first game launched in 2009 across Japan, and was met with a mixed-to-positive critical reaction.

The trilogy's second entry - Final Fantasy XIII-2 focused on the concept of time travel, and placed Serah's search for her sister Lightning as a key plot point.

Toriyama confirmed to VG247 that Square-Enix may compile all three games into one re-pack if fan demand is high enough.

I interviewed Toriyama about the history of the Final Fantasy series, including his work on Final Fantasy VII's most iconic moments, such as the romance between Cloud and Aeris. Fans simply need to check it out here.

I'm a member of the Final Fantasy XIII sympathisers club, and I'm not afraid to say it.

The first 30 hours of the game are perhaps the longest battle tutorial in existence, but once you descended to the roaming plains of Gran Pulse the game grew epic in scope. For many players though, Hope's grating attitude and the plot's linear progression saw them bailing long before the pay-off.

I enjoyed the game, but I still pined for the days where I could explore sprawling world maps at my leisure. There was nothing in there that could match my fond memories of roaming the ocean floor in search of Emerald Weapon, or discovering the village of Wutai long before the story directed me there.

Final Fantasy XIII-2 opened things up considerably by comparison with its time-travelling yarn, and again, I actually enjoyed it. This is a love affair that started when Final Fantasy VII first launched, and while the series has stumbled at points, I keep on returning to it with open arms. I'm firmly a fan.

Lightning Returns: Final Fantasy XIII is the concluding chapter of the trilogy, and it also takes a fairly linear approach. The emergence of Skyrim has showed that RPGs can still offer broad worlds full of limitless freedom to explore, so it's little wonder that fans of the genre have become jaded by Square's attempts to fence players in.

As ever, I'm willing to give any game the benefit of the doubt, and I was keen to learn more about how Square tackled the lofty challenge of rounding off Lightning's story, and why it chose the format it did. The plot focuses on the pink-haired hero 13 days before the end of the world. Morale is low, armageddon looms and time is running out. 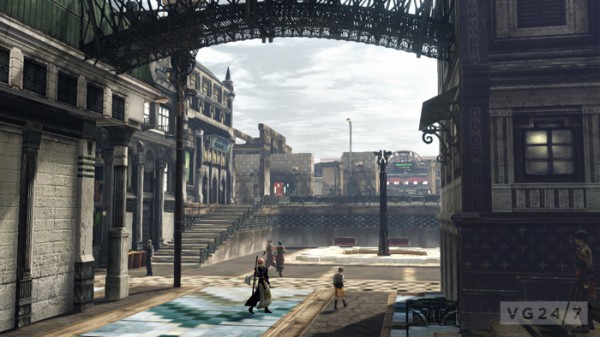 Trapped in the city of Luxerion, Lightning - thanks to her efforts in defending the goddess Etro in Final Fantasy XIII-2 - has been bestowed with the title of 'Liberator', a divine guardian who will cleanse the souls of humans in the world's final days and lead them to a more prosperous existence. It's a bleak, desperate tale, far removed from the giggles and schmaltz of Square's previous instalment.

"In the ending of Final Fantasy XIII-2, Gran Pulse - the world that Lightning and her friends inhabit - merged with Valhalla, the world of death", Toriyama told me. "Lethal Chaos energy flowed from Valhalla into Gran Pulse as a result of this merging, thus beginning the deterioration of Gran Pulse into oblivion.

"At this point, the correct flow of time ceased and people stopped ageing. The collapse of the world continued steadily over several hundred years, until only a single tiny continent remained. People created a new civilisation on this continent and it came to be known as “Nova Chrysalia”.

The world has been split into four continents this time. Luxerion is the only major location revealed so far, and it's a holy city where humans meander aimlessly, essentially waiting to die. It's littered with gothic architecture wrapped up in a dark colour palette. Toriyama explained that the grim tone is supposed to symbolise what he called the, "Strong awareness of death in a world that has lost its concept of mortality."

With the fate of humanity on Lightning's shoulders, this repsonsibility will reveal a more emotive site to her typically po-faced exterior. If that wasn't enough, the very people she's saving believe she's actually the harbinger of the apocalypse, due to facts that have become long-muddied in legend. 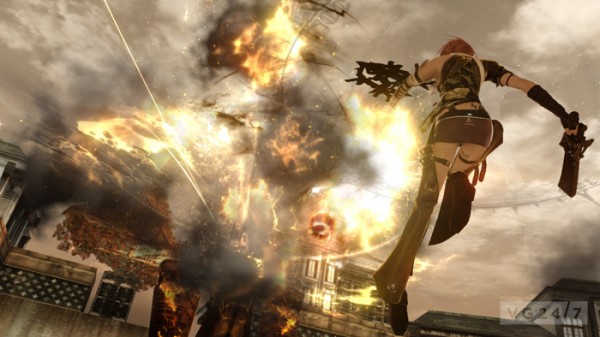 "The role of the Liberator is to cleanse people’s souls and lead them to a peaceful existence in a new world," Toriyama continued. "However, some people think that this act is very much like killing them and view the Liberator as a cursed and sinister being.

"This all occurs against a backdrop of several cults and religious organisations, venerating the deities in the face of an impending apocalypse, turning upon Lightning and becoming tied up in the developing incident."

This misconception makes Lightning a target for several fanatical groups who hold different beliefs about what the end of the world will bring. Not long after arriving in Luxerion, an attempt is made on her life, triggering the core plot. With foes everywhere, Square needs a solid battle mechanic and from the sound of it, the studio won't disappoint.

"The battle system further develops the tactical elements of the Active Time Battle system from Final Fantasy XIII and XIII-2, while changing the basic setup to be more action based", Toriyama explained. "The battle system makes Lightning the sole player character and lets you control her directly.

"You can set up to three 'battle styles' for Lightning to use in combat, and each of these styles allows her to perform the different roles from the paradigm shift system in the previous titles, all on her own. The ATB gauge is different for each style, meaning the player will watch three different gauges on screen during battles."

The result sounds like something more rhythmic than before. It seems like it will require immense focus and attention to how each of the three ATB bars are progressing during battle. But that's not all, because Lightning's outfit also changes up her stats and abilities, which sounds loosely similar to the Dressphere system in Final Fantasy X-2 or the 'Job' mechanic from the series' classic entries. 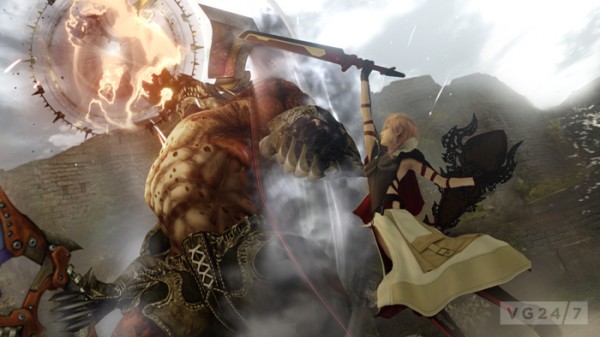 Toryiama explained the format, "The game will also have many other costumes available in addition to the Liberator’s outfit. These costumes form a central pillar of the battle style system, and affect the player’s combat power and abilities.

"It goes without saying that you can pair the different clothing options with a myriad of swords and shields to form many combinations, and you can also simply and easily make subtle adjustments to the colours of the different pieces of each costume - meaning that every player will be able to create a version of Lightning to suit their tastes."

But with all concluding chapters - be it the finale of a long-running TV show or movie series - Lightning Returns: Final Fantasy XIII has a lot of plot strands to tie up, and a responsibility to loyal fans in delivering a satisfying conclusion. Between the game's returning characters and its darker plot, Toriyama is confident Square can deliver.

"The main cast of Final Fantasy XIII and XIII-2 will of course appear again in Lightning Returns. In much the same way as Lightning herself, most of them feel responsibility for the world and they continue to live out their existences in the build-up to the apocalypse.

"This is in no way limited to the returning main characters, but over the long days of anguish, the mental scars that they bear have come to cloud their hearts in a deep and impenetrable darkness. During the story Lightning will interact with her old comrades in many different ways in order to lift this darkness.

"The concept behind the design of Lighting Returns is that it will be the concluding chapter of the Lightning Saga; and so unlike in the previous title, there will not be multiple possible endings created from differently branching interpretations of history, but instead the story will lead to the one true ending."

Lightning Returns: Final Fantasy XIII is slated for a blanket 'Q3 2013' release on PS3 and Xbox 360. We'll have more on the game as it happens. Let us know what you make of the game and Toriyama's discussion below.