American Express is expected to reveal a line of League of Legends-themed debit cards on Wednesday, as well as a partnership with the MOBA's developer Riot Games. The cards are said to offer holders bonus Riot Points - the game's currency - as they spend.

A report by the New York Times states that American Express will unveil the cards on Wednesday, which will bear images from the game. 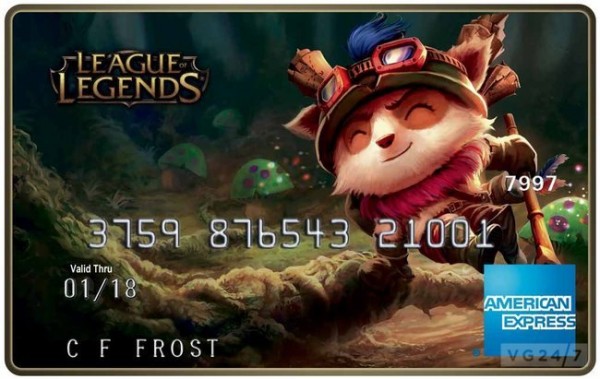 The Riot Points incentive will see card holders gifted 1,000 points for signing up, and a further 1,000 for depositing their first $20 on the card. Extra points are awarded with every dollar spent, and after the card's first ten purchases, while a 10,000 point bonus will be doled out when the card is tethered to a direct deposit account.

It's important to stress that this is not a credit card, but a pre-paid bank card with no activation fee or credit checks. It's simply topped up with the holder cash and used like a regular bank card.

Dustin Beck, vice president of electronic sports at Riot Games said in a statement, “It gives you a sense of how deeply engaged the players are in playing this game. We are about loyalty, we are about contact and long-lasting engagement. This is an ideal fit from an audience perspective.”

Stefan Happ, general manager for online and mobile at American Express in the United States, added that the cards were created to “expand our traditional reach beyond the mass affluent," and reach new types of customers.

The site adds that videos explaining how the card works, as well as an advertising campaign will go live on Wednesday to coincide with the announcement.

What do you think of the above? Let us know below.