Nintendo and The Pokemon Company have released a new Pokemon Sun and Moon trailer featuring new Pokemon. Bios, screens along with information on two new characters are inside.

You'll notice the Alolan Grimer which was revealed in CoroCoro yesterday is included, along with its Alolan region evolution of Muk.

Also of note, the Battle Royal mode revealed during E3 2015 during a NicoNico Live stream on October 23 at 9am ET/2pm UK/10pm JST.

The following new Pokemon and their evolutions were revealed today. 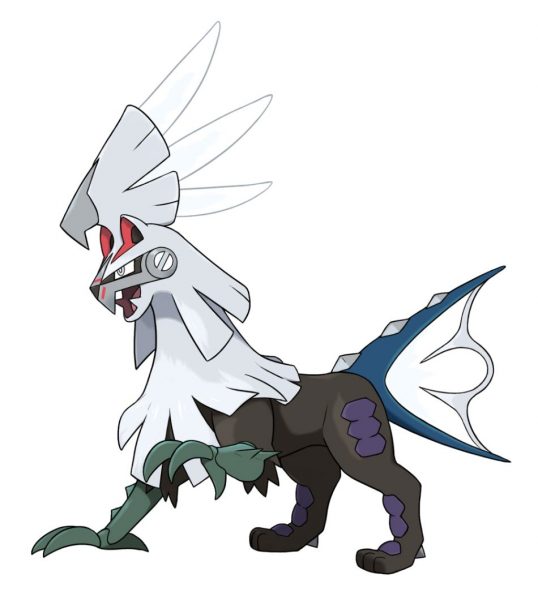 The Synthetic Pokemon Silvally is the evolution of Type: Null. This Pokemon changes its type when exclusive items are inserted into the drive on its head, and its somatic cells mutate and glow with different colors of light depending on its type. Silvally has the new Ability RKS System, which causes this Pokemon to change type when holding specific type-related items. It also has the exclusive move Multi-Attack, an attack which changes depending on which type-related item it is holding. 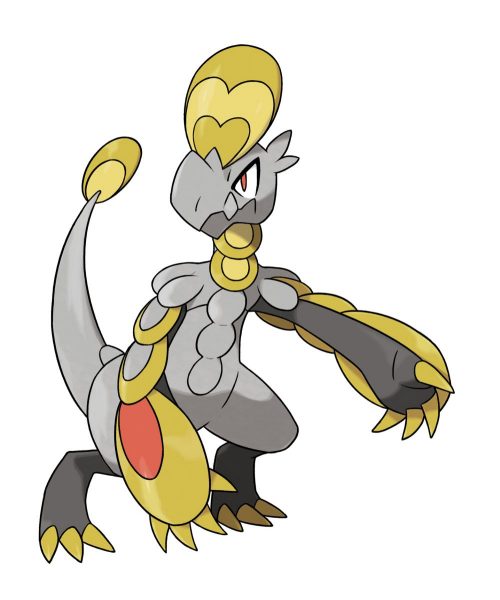 Hakamo-o is the Evolution of Jangmo-o. Hakamo-o dance before battle to show their strength, clanging their scales together. A solitary Pokemon that enjoys training alone, its scales are often torn off, but they grow back nearly immediately. Hakamo-o view the number of lost scales as proof of how ferociously they have fought in battle. 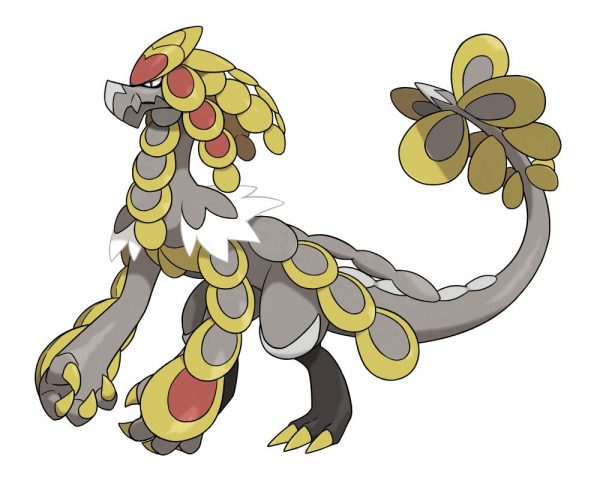 Kommo-o is the Evolution of Hakamo-o. There is a legend that says Kommo-o are covered in glittering scales in order to drive away a great darkness covering the world. This Pokemon can learn the new move Clanging Scales. When using this attack, Kommo-o scrapes the scales covering its body against one another, attacking with a loud clamor. After using this move, Kommo-o’s Defense is lowered. 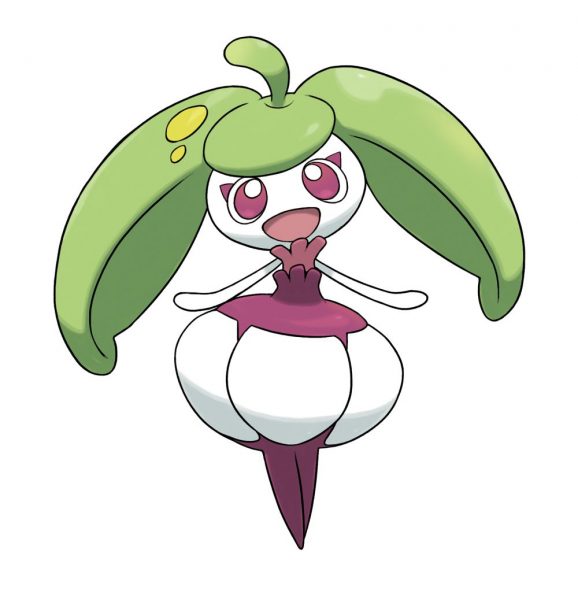 The Fruit Pokemon Steenee is the Evolution of Bounsweet. The calyx on this Pokemon’s head is very hard, and Steenee attacks by smacking its opponent with it, combined with kicks from its tough legs. This Pokemon’s fragrance is even more delectable than that of Bounsweet. 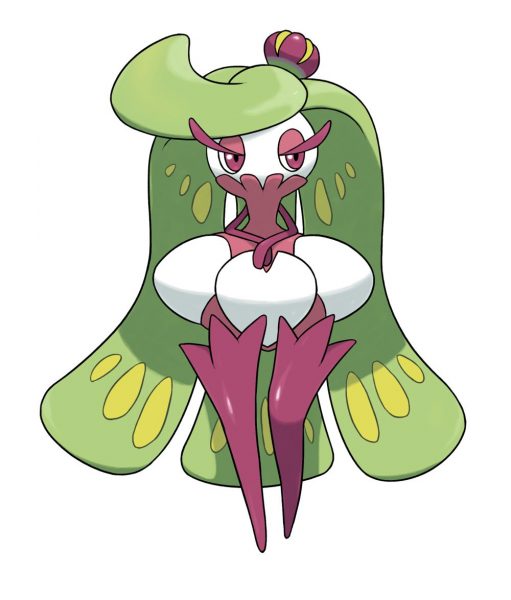 Only the strongest of Steenee are able to evolve into Tsareena. A very noble Pokemon, Tsareena use their strength to protect and rule over Bounsweet as their queen. This Pokemon attacks with very powerful, majestic kicks and uses its powerful fragrance to mesmerize its opponents. Some Tsareena have the exclusive new ability Queenly Majesty, which prevents opponents from using priority moves. 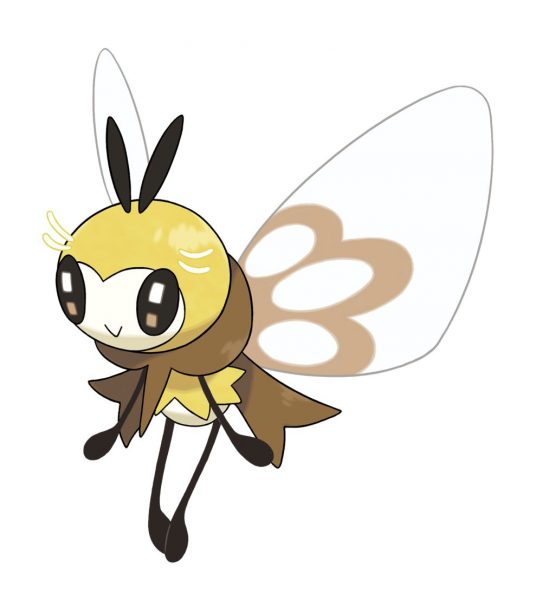 Ribombee is the Evolution of Cutiefly. This Pokemon collects flower nectar and pollen to make into balls, known as Pollen Puffs, which it can then launch at its opponent in battle. Some of the Pollen Puffs that Ribombee make also have relaxing effects or can relieve tiredness. These Pollen Puffs are distributed all over the Alola region. 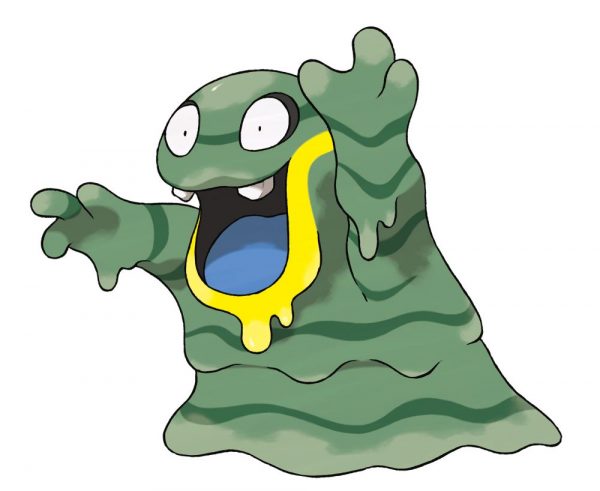 As the population of the Alola region increased, dealing with garbage became a serious problem. As a solution, Grimer were imported from other regions and fed primarily on garbage, so their body composition changed—as did their form. What appear to be teeth in this Pokemon’s mouth are in fact residual toxins from the garbage it eats, which have hardened and crystallized. There are more than a hundred Alolan Grimer in Alola’s garbage-processing plants. 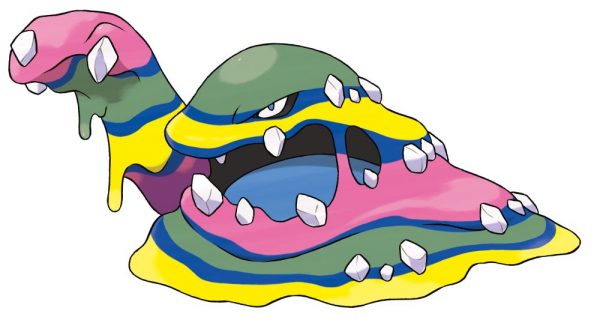 Alolan Muk evolves from Alolan Grimer. The Muk in the Alola region produce and store their toxins within their bodies so, unlike Muk in other regions, you won’t detect any unpleasant aromas when you draw near one. Alolan Muk has the same poisonous crystals as Alolan Grimer, but they are all over the surface of its body. Alolan Muk uses them to attack, just like other Pokemon use their fangs or claws. 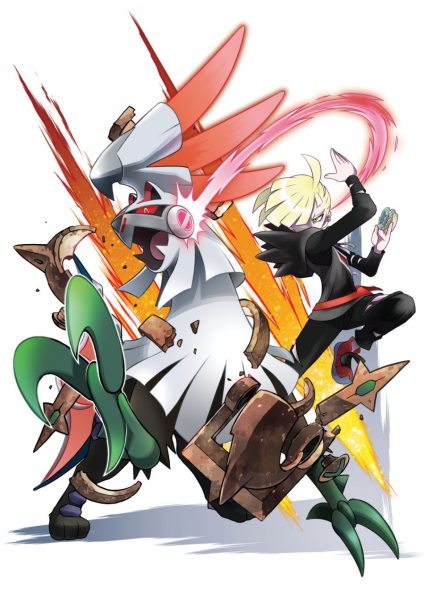 Two new characters who will appear in the Pokemon Sun and Pokemon Moon games were also announced.

Olivia: Olivia is the kahuna of Akala Island, the second island you visit across your island challenge. She is extraordinarily skilled and has served as a kahuna since a young age. Although highly skilled, she insists that she is just a normal girl.

Ilima: A graduate of the Trainers’ school and an expert in Normal-type Pokemon, Captain Ilima is considered a hero by the students of his former school.