With his parents’ murderer dealt with and the town of Merhojed healed, Henry sets out to track the source of the dirty money fuelling Kingdom Come Deliverance’s twisting central plot.

This is one of the longest quests in the whole game with well over 25 steps, so be prepared. Here’s how to complete the All that Glisters main quest in Kingdom Come Deliverance, with tips on how to beat Ulrich and find the mine entrance.

All that Glisters quest guide 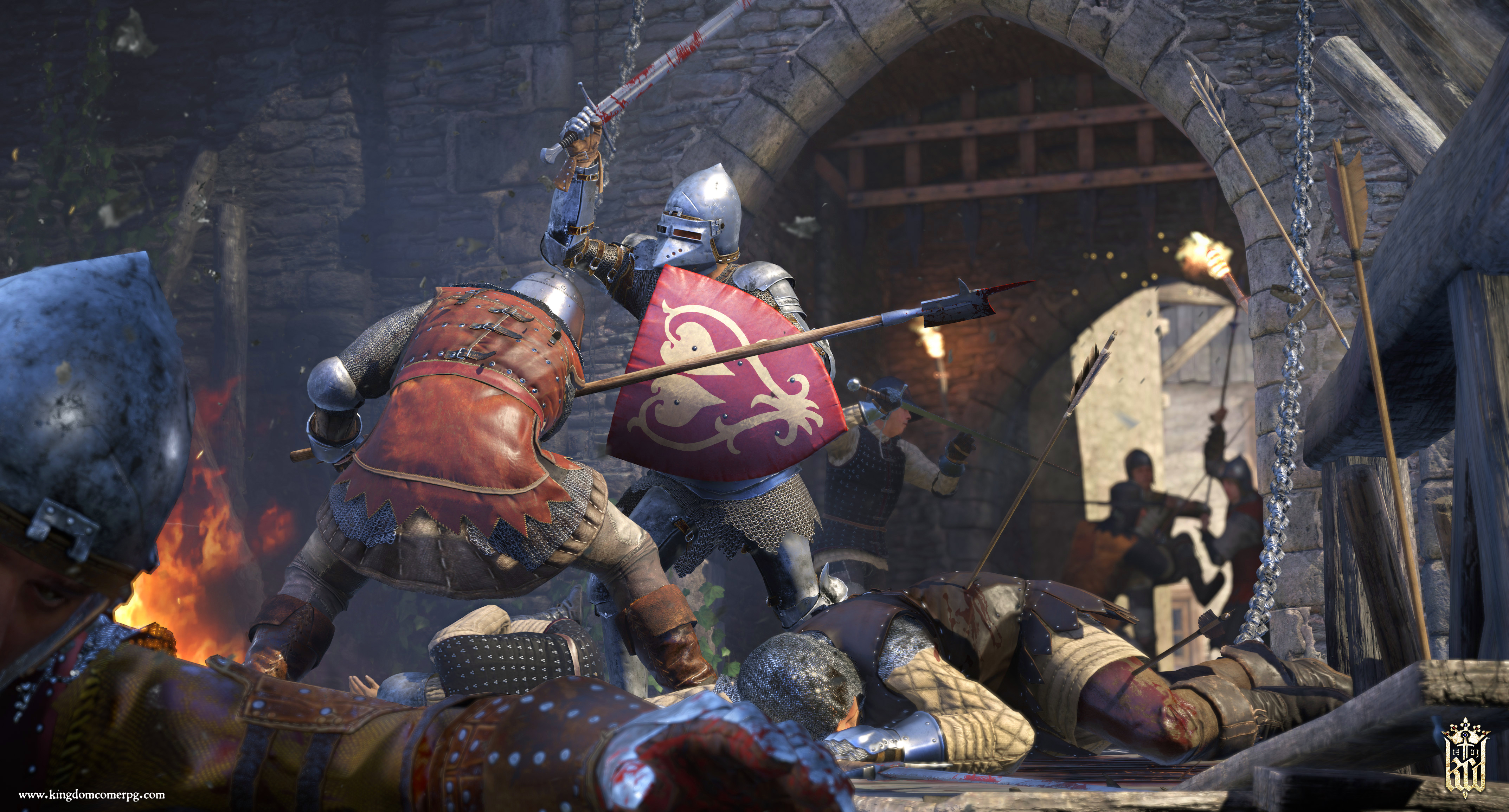 All that Glisters starts after you’ve reported back to Sir Radzig at the end of the Questions and Answers quest where you interrogated the Merhojed bandit.

Armed with that information, Radzig will send Henry out in search of the counterfeit Groschen hand-over point.

Ride from Rattay northeast towards Rovna and find the map marker.

They’ll keep schtum until you persuade them otherwise with your speech, charisma or strength, before pointing you to a shed on the edge of their camp where they dragged a survivor.

Speak to the man about the attack and you’ll be interrupted by a cutscene with a mysterious German knight.

Chase down the German Knight Ulrich:

When Henry bursts out of the shed, Ulrich will flee on horseback through the forest. Give chase as best you can, it can be difficult not to get stuck on the scenery and fall off your horse.

Ulrich will take a route similar to the one you took in the Nest of Vipers quest, except instead of going straight on at the crossroads to Pribyslavitz, he turns southwest towards Sasau.

You can try to unseat Ulrich from his horse by stabbing at him with your weapon. This is not recommended however, Ulrich is an expert fighter and when he gets off his horse, will be ready to fight.

The best strategy is to follow him all the way to the large main inn between the Sasau monastery and town.

When you arrive you’ll be able to talk to Ulrich, who’ll ask you to meet him next to the river after dusk a little way from the inn.

This way you have time to properly prepare for what’s to come. Equip your best combat gear and a bow, then head to the meeting point marked on your map and swig some saviour schnapps before you speak to him.

Ulrich is a tough fight - similar to Runt in the Baptism of Fire quest - so it’s best to try and beat him in the same way.

When the fight starts, draw your bow and aim for Ulrich’s face. You don’t have to be proficient with a bow, at close range it’s easier to judge the arrow's flight.

You will take hits, but Ulrich will go down much, much easier this way.

If you're on PC, you can make this even easier with the "showfirecursor" console command. Check out the linked page if you don't know how to activate them.

If this method is a little too cheesy for you, try getting the headcracker strength level-up perk and using a mace to attack his head. Ulrich is equipped with a shield, making him harder to hit with melee than Runt, but the Headcracker perk means you can make more out of blows you do manage to land.

When he’s on the ropes, Ulrich will surrender. Let him yield and speak to him. If you don’t kill him, he’s a helpful ally later in the quest.

Milk Ulrich for everything he knows about the case and he’ll give you some revealing documents.

Ride back to Rattay and show them to Master Feyfar in the lower castle. He’ll drop some interesting tidbits about a Bohemian noble family - the Rosenbergs - before sending you back to speak to Ulrich and travelling to Sasau himself.

Track down the copper:

He’ll tell you to speak to the Overseer’s hand at the Monastery.

Ride to the monastery and go up the stairs to the south of the infirmary that you visited during the Pestilence side quest. In the office at the top, you should find the Overseer’s hand sat at the desk.

As with seemingly everyone in this game, they won’t tell you what you need to know straight away, so try some light persuasion using your speech, charisma or strength. The hand scares easily, so you should’ve built up your stats enough by this point.

Once he’s spilt the beans, return to Master Feyfar. He’ll be in plain clothes in the main Sasau town.

While you’re over on this side of the river, it’s a good idea to get the next part of the quest going. Go and speak to Blacksmith Mikesh at the northern end of Sasau and ask him about copper. He’ll tell you that the Monastery blacksmith, Zach, bought it all.

Ride over to the courtyard just southeast of the monastery and talk to Zach the blacksmith at the northern end. He’ll stonewall you, but speak to his son, Vitus, and use your persuasion skills to convince him to talk.

Once the son’s confessed, speak to Zach again, and use the information his son gave you against him.

He’ll tell you that he’s working for a thug named Rapota.

Track down the minting plates:

While you’re in the courtyard, head to the southern end and go into the building. Upstairs is where you should find Master Jerome the engraver.

Ask if he works alone, then where Florian is. Say that you have a message for him and Jerome will tell you that he lives in the Baker’s cellar.
Head back to Sasau town and the baker’s shop. There’s a door at front of the shop accessible from the main street. Florian should be sat at his desk in here.

Tell him you know what’s going on and he’ll come clean about Rapota and how his girlfriend Esther has been kidnapped.

You can either choose to save Esther or use your persuasion skills to make Florian give you the details straight away. The latter is quicker and has no bearing on the quest outcome. When he agrees to help, Florian will leave his house as bait to draw Rapota out.

Follow him for a bit as he leaves and watch out for another man tailing behind. That’s Rapota, so run up and speak to him.

When he know’s the game’s up, he’ll try to run. Sprint after him and tackle him with the left trigger.

Rapota will then tell you that the fake Groschen workshop is in the Skallitz mine. He then asks you to kill him, but you can choose to send him to prison if you wish.

Storming the mine workshop:

The upcoming quest markers can give you an absolutely massive area to search, along with a ton of enemies to fight, so be sure to gear up.

Here’s where Ulrich becomes an incredibly powerful ally if you didn’t kill him earlier in the quest. Not only is he a beast in a fight, but he’ll automatically run to the next set of enemies, so just follow him to where you need to go. Let him soak up the aggro and land hits with the enemies unaware, or use a shield to fend off multiple enemies and let him clean up.

When Rapota has told you where the mine is, go and see Ulrich at the Sasau inn and you’ll automatically travel to near the mines.

If you're not travelling with Ulrich, or don't want to take him with you, the camp you need to find is west of Merhojed, across the river and up the hill. It's almost exactly parallel with Sir Radzig's camp on the outskirts of Merhojed.

Follow Ulrich to the first camp and deal with the enemies. Sometimes bandits on the periphery can run away with Ulrich giving chase, be patient, help him catch them and he’ll focus on the task at hand again.

If you lose track of Ulrich, the entrance you need to go into is right next to the first camp you attacked - a doorway built into the hillside. It should be visible on your right-hand side if you face west.

Make your way with Ulrich into the mine until you’re interrupted by a cutscene.

In keeping with how the mission’s gone so far, Ulrich will instantly try to kill him. Protest, and say that you want to take Jezhek in for questioning. Ulrich will refuse, but stick to your guns and refuse to let him kill the counterfeiter. As soon as you get the opportunity when you’re trying to convince Ulrich, mention the Rosenberg family - the Bohemian nobles Feyfar told you about before.

Ulrich’s mission was supposed to secret, so now that you know about the Rosenbergs, he is no longer bound to do their bidding.

He’ll leave you to take Jezhek back to Rattay.

With the counterfeiters behind bars, report back to Sir Radzig, who’ll ask you to interrogate the prisoner.

Ride to the other side of Rattay to collect the keys to the cell from Captain Bernard, then head to the Rathaus basement. It’s the first door on the right as you come through the archway. Turn left when you walk in, past the stairs, and go through the door down the stairs.

Unlock the cell door and talk to Jezhek. He’ll actually agree to tell you what he knows in exchange for his life. Listen to what he has to say, then head back to Sir Radzig.