With the Bandit’s flow of coin put to an end and the counterfeiters brought to justice, Henry turns to infiltrating the gang to further his investigation. This quest makes use of Kingdom Come Deliverance’s fist fighting system, so don your gauntlets. Here’s our guide to the If you can’t beat ‘em quest in Kingdom Come Deliverance, with help on where to find the crimps meeting place and beat Punch at his own game.

If you can’t beat ‘em is much shorter than the previous quest, All that Glisters, and can be completed in multiple ways. It’s quicker and easier to finish this quest if you have the First Aid III main level perk, which gives you access to the most advanced healing dialogues. So pick it up if you can. 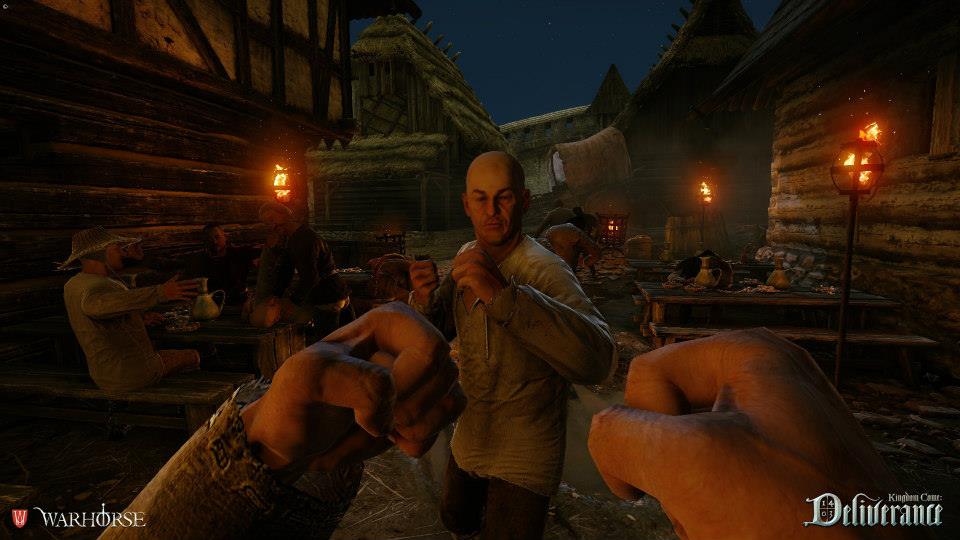 If you can’t beat ‘em will start after you’ve caught Sir Radzig up to speed at the end of the All that Glisters quest.

Wary of another Pribyslavitz, he’ll ask you to head back to Sasau and find out more about the gang recruiting toughs in the area.

So ride back across to Sasau and start you enquiries.

There are two main ways to proceed, each with the same or similar outcome. If you have the First Aid III main level perk, you can skip a fist fighting tournament. If not, think of it as valuable strength and vitality EXP.

If you don’t have the First Aid perk, go and speak to the Sasau Bailiff. He’s an official, so don’t worry about Henry bandying about Sir Radzig’s name to him. The Bailiff will point you in the direction of the Tanner when you ask if there’s been trouble in town.

Head over to the Tanner and ask what’s the matter. He’ll tell you about a group of ruffians that meet up and fight behind his house. Agree to deal with it for him, and wait until around 6PM. If they’re not already there, the group should be walking towards the destination by this time.

Speak to Punch and ask him about work. He’ll shoot you down, but stay persistent and ask him “how this all works”.

He will tell you to fight his friends Weed, Stump, Betwixt and Lanky, before facing him in a final fight.

Walk over to each one in turn and challenge them to a fight. If you want a boost to your unarmed skill, you can pay Punch to teach you for a fee.

The fights aren’t too hard. Get in close and make use of clinches with the Right Trigger to wear them down. Be ready to press the Left Bumper (L1) to perform a parry when they do attack.

None of the fighters are very aggressive, so you should be able to get through if you’re patient.

Don’t go in swinging too hard. Duck in, launch a few blows, then duck out. Otherwise you’ll leave yourself open with low stamina.

Punch is the most difficult bout by a country mile. Just stick to what you’ve done in the previous four and, after the absolute age it takes to down him, you’ll be victorious.

When you’ve won, wait for Punch to regain consciousness. He’ll tell you to go to the church after dark.

If you have the First Aid III perk, there’s a much quicker route to the church knowledge.

Instead of going to the Bailiff, speak to the Innkeeper in Sasau town. He’ll tell you about the Knacker.

Track down the Knacker using the map marker, he’s labelled as “Gravedigger” when you meet him.

Ask him about what’s going on around town and about suspicious people, and he will eventually tell you about a man with a broken leg in the Monastery infirmary.

Ride over to the Monastery hospital - which you visited in the Pestilence quest - and talk to the man with a broken leg. He’ll be unresponsive.

If you haven’t already when you visited the first time, you can set his leg properly because of your medical knowledge from the First Aid perk.

When he’s come to, you can ask him about work for “fearless men”. You’ll then be told what you need to know about the church.

Armed with the knowledge of the bandits’ meeting place, ride over to the church and wait for nightfall. Head around the back and go through the doors. “Use” the altar, and you’ll trigger a cutscene.

In conversation with the bandit, he’ll ask you where you heard about the group, so tell him either Punch or the man with a broken leg.

You’ll then be asked to kill a man named Pious to prove yourself to the group. Agree to their terms, and the quest will end.