John Carmack has joined Oculus VR as chief technology officer. The company is known for its popular Rift brand of VR headsets. 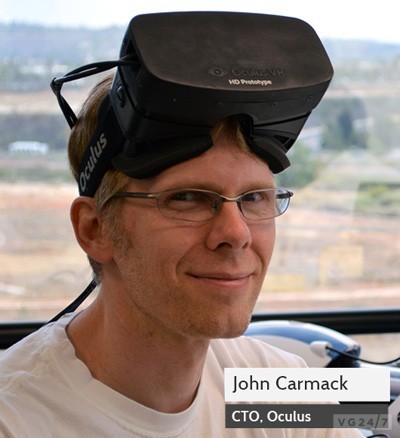 UPDATE: Bethesda has just sent us an email to clarify Carmack's position. A statement reads, "John has long been interested in the work at Oculus VR and wishes to spend time on that project. The technical leadership he provides for games in development at id Software is unaffected."

Happy to say @id_aa_carmack is not leaving id & will continue to provide leadership for our games in development.

He has not left id Software. He is holding both roles and sounds like he's about to get incredibly busy:

My time division is now Oculus over Id over Armadillo. Busy busy busy!

More as we have it.

ORIGINAL STORY: A statement from the company confirmed that Carmack is now Oculus VR's new chief technology officer, and reads, "John is one of the brightest minds of our generation - pioneer, visionary, and industry legend. There are very few people in the world that can contribute to the Oculus Rift and the future of virtual reality like John can."

Oculus is opening a new studio in Dallas that Carmack will head up, and it is currently seeking new talent.

In a statement, id Software co-founder Carmack said, "I have fond memories of the development work that led to a lot of great things in modern gaming – the intensity of the first person experience, LAN and internet play, game mods, and so on. Duct taping a strap and hot gluing sensors onto Palmer's early prototype Rift and writing the code to drive it ranks right up there.

"Now is a special time. I believe that VR will have a huge impact in the coming years, but everyone working today is a pioneer. The paradigms that everyone will take for granted in the future are being figured out today; probably by people reading this message.

"It's certainly not there yet. There is a lot more work to do, and there are problems we don't even know about that will need to be solved, but I am eager to work on them. It's going to be awesome."

Carmack has expressed a great deal of public interest in Oculus Rift since he announced it would be compatible with Doom 3: BFG Edition last year. Last August we reported that Doom 4 will also use the device.

id Software was founded by John Carmack, John Romero, Tom Hall, and Adrian Carmack. It is best known for its work on Wolfenstein 3D, Doom and Quake, as well as recent shooter Rage.

As discussed in the superb book on id's history 'Masters of Doom' - seriously, read it - it was always Carmack's desire to make the Holodek concept from Star Trek a reality through games. In Oculus Rift, he'll get one step closer to that dream.

At the time of writing id Software is working on Doom 4, but the company can't talk about it right now.