Islands of Nyne is what happens when you decide to boil battle royale down to its most basic mechanics, and give them a turbo boost.

As the battle royale sub-genre grows, it’s going to inevitably pull in players from other genres and games. This frees up developers to choose which of the battle royale tenets to adhere to and which to alter in their pursuit to make a game for a particular group of fans over another.

Islands of Nyne, which only just launched in Steam Early Access, represents a new wave of battle royale shooters not content to keep the status quo.

When Epic created a BR mode in Fortnite, intentionally or not, the developer made a faster version of PlayerUnknown's Battlegrounds. Fortnite obviously has a few other things going for it, such as its evolving story and building mechanics, but calling it a more action focused PUBG is not a stretch. As PUBG continues to lay claim to the tactical-leaning segment of the BR market, it’s hard to imagine another player joining the fray without a wholly unique take of its own.

Yet, Islands of Nyne manages to stand out enough with the help of some originality and a clear focus on providing a specific type of experience not found in either of the top games. More than any other BR shooter, ION is the closest thing we have a to a Call of Duty version of battle royale - and yes, I am aware Call of Duty hasn't had a say in the matter yet. 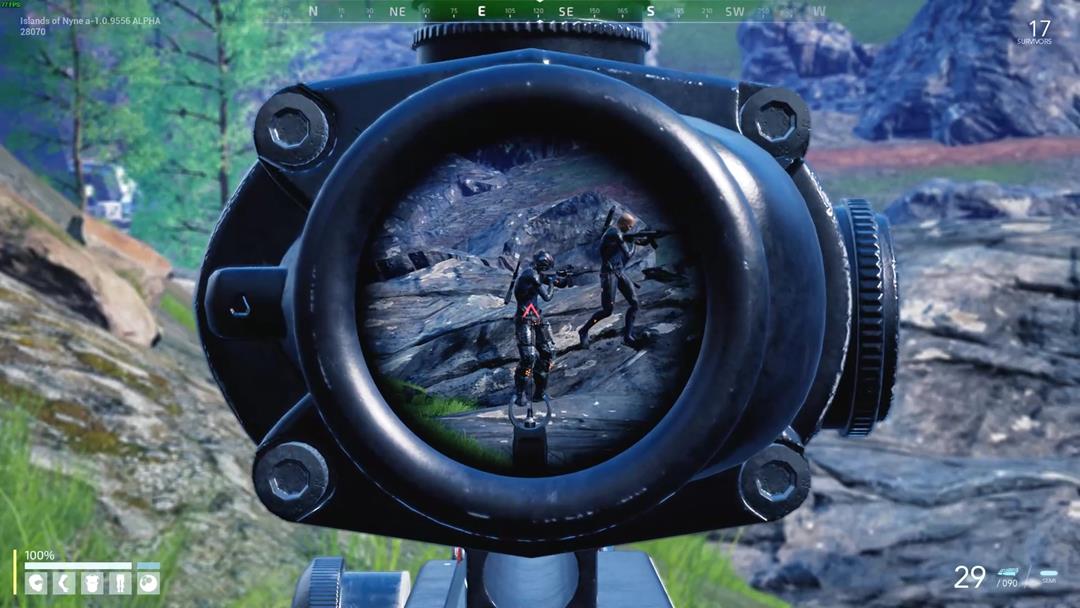 Fast movement speed, frequent action, snappy controls and a short time to kill have all been staples of Call of Duty’s gameplay for over a decade, and Islands of Nyne is bringing them to battle royale. It is undoubtedly the fastest BR game I have played. Matches last six to 15 minutes, thanks in large part to the smaller map and the lower player count; 50 compared to the standard 100.

Win or lose, it’s all going to happen very quickly.

This has the side effect of making rounds feel disposable, but that’s not necessarily a bad thing in this case. For someone with a couple hundred hours in PUBG, who doesn’t “get” Fortnite, ION offers a more frenetic alternative that doesn’t require anything from the player beyond standard shooting and twitch skills.

In that sense, Islands of Nyne’s gameplay is incredibly consistent with its design mantra. There’s little to no bullet drop, making shooting feel snappier and the action tighter. The abundant availability of weapons practically everywhere you land eliminates the early game slog in a game like PUBG.

But that’s just one part of it. ION also brings the same approach to looting, armour, and the air drop mechanic. You'll only ever find a basic option for armour along with an energy shield, frag grenades and health stims. How ION makes it interesting is through the boosts certain pieces provide.

I couldn't say for sure if the enhanced HUD and compass on my screen were a bonus for equipping a specific helmet, or for donning a full set of armour. The important thing is that the game is taking a different approach to the traditional armour rarity system seen in other BR games. Elite weapons do exist, of course, found in airdrops that're marked by a massive beam seen by everyone.

Ammo is only divided based on the weapon type, so all assault rifles take AR ammo and all SMGs accept SMG ammo. Crucially, however, the game puts a limit on the number of bullets you can hold per type. This limitation may seem at odds with the emphasis on fast-paced action, but it prevents ION from becoming a spray and pray shooter. Players may die really quickly to gunfire, but you still need to be relatively accurate with your shots. 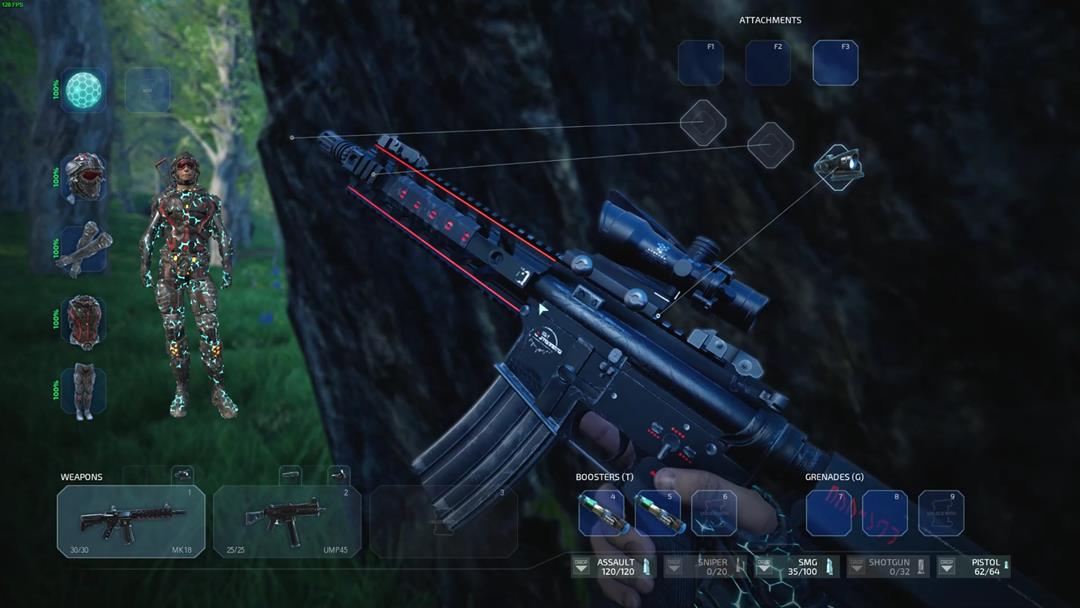 Shortly after the round starts, small flying drones are sent to different parts of the map. Shoot them down and you’re rewarded with loot, but not too much that you become unstoppable. Drones go down fairly quickly, but you can bet that anyone in a 50-100m vicinity will hear your gunfire.

The stakes for chasing these down are less than what you'd get for going after a PUBG airdrop, but they're a risk nonetheless thanks to the short time to kill. You'll see players camping the looters, and others camping the campers because war... war never changes.

And to maintain this gameplay pace, the playable zone appears before you hit the ground and moves faster and faster to force confrontations. Zone locations are always random, too, so camping for more than a minute is rarely advisable. Battles can be started and done much quicker than the rest of the battle royale competition, making Islands of the Nyne perfect for jumping into for a quick game.

On the flip side, there’s not a lot of room for tactical manoeuvres or decision making in an Islands of Nyne round, but this also means there’s little in the way of an entry barrier. Your reaction time and shooting skills will largely be what decides a fight. The smaller map, brighter colours and better-defined structures make it simple to spot and track other players. Hiding behind a tree stump and slowly peeking angles to spot a shooter isn’t something you’ll be doing here. 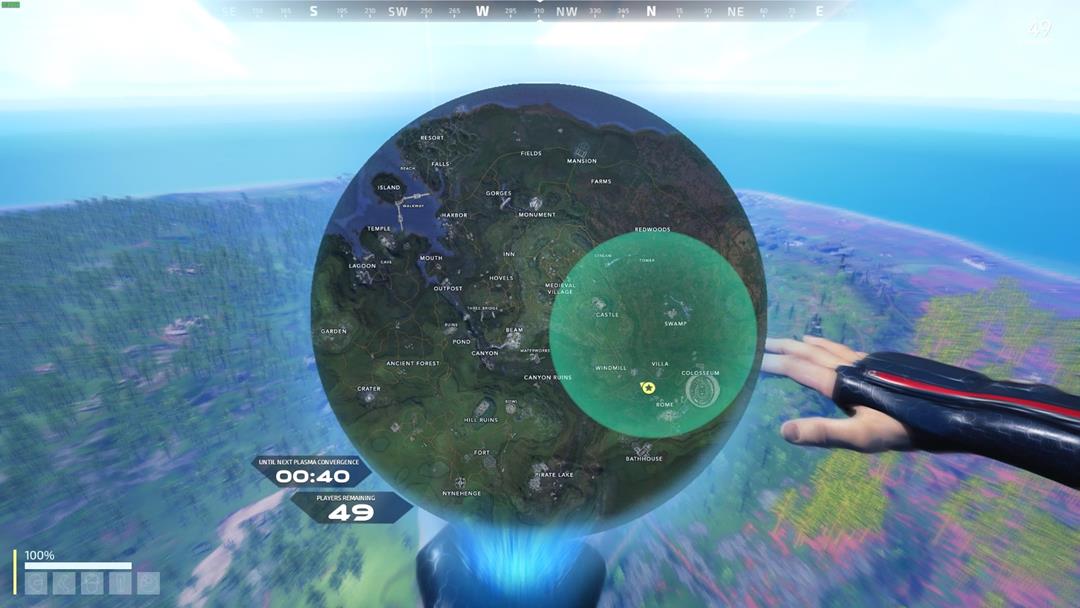 Which brings me to the game’s visual aesthetic. Perhaps it’s the curse of being an Early Access battle royale game in 2018, or maybe it’s nothing more than a reality of modern indie game development for multiplayer titles – but ION doesn’t have a coherent visual identity. Weapons look like modified Unreal store assets, and so do their attachments, the buildings in the world, and even the foliage.

These may well be placeholders intended to be replaced with original work later. They may even be original themselves, but I don’t find either likely. The arena, called the Dome, is an amalgamation of structures from different eras. Medieval castles and Roman coliseums can be found next to futuristic structures and villages. ION tries to explain this with lore, telling the story of an alien race that purposefully created the Dome from monuments Earthlings will be familiar with, without any regard for history or timeline.

It’s an amusing way to explain it, but it ultimately doesn’t really matter. If anything, these seemingly stock houses and objects have been modified enough to be fun to fight in and around, something PUBG still fails to do to this day with some of its buildings.

The focus on function over form has paid dividends, as Islands of Nyne is a well optimised game that doesn’t suffer from the core issues plaguing many Early Access games today. I imagine developer Define Human didn’t want to launch with an unplayable netcode and a poor performance.

This is the thing that stands out the most, and it’s what really makes it a breeze to jump in and out. I can safely launch into a PUBG game today and get desync or questionable hit detection fairly consistently, whereas I’ve yet to run into any of that in my few hours here.

I’d also like to highlight the fact ION launched with a functioning, rewarding progression system. Anything you do in the match earns you XP that go towards an account level. The game simply exchanges points earned for kills, damage and placement into credits you can use to buy cosmetic crates.

Even a short round that saw you die right at the start is enough to get you a few credits, a bit of XP and a sense that not all is lost. The game is also rating your performance and you can see how that hot drop affected your overall ranking.

This is great to see from a game seemingly still in alpha, and it’s worth stressing that Define Human pushed for having a progression system on day one. 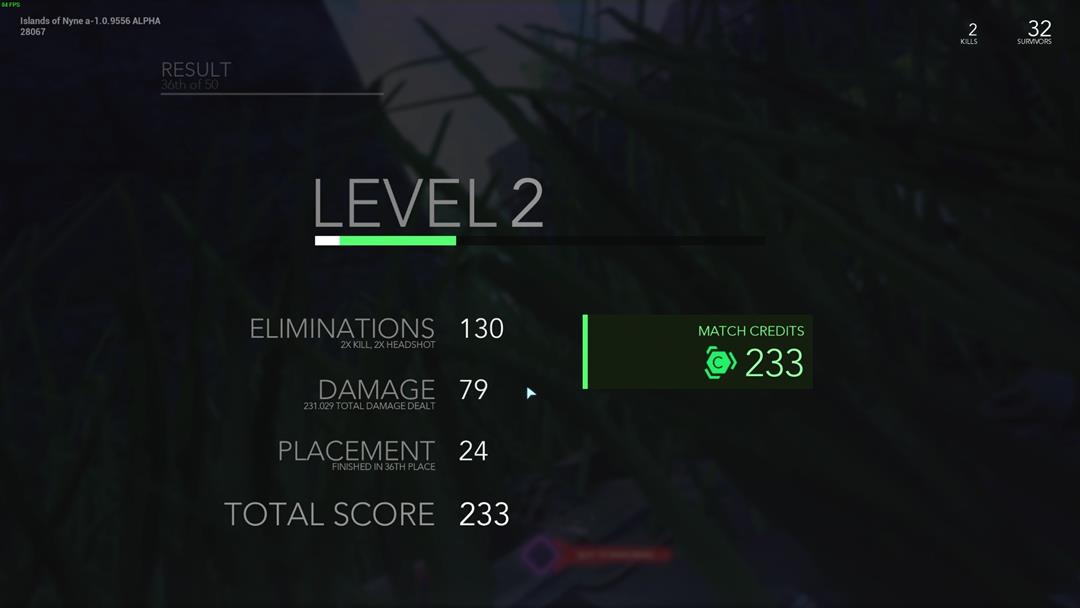 Islands of Nyne is not without a few issues. The shorter match time demands more maps to keep things interesting. The looting UI feels awkward, and movement mechanics need to pick either Counter-Strike or Call of Duty for inspiration, not a mishmash of both. But, I can’t fault it too much when the core experience is consistent and satisfying.

I’ve ranted previously about how some developers think Early Access is paid testing. I’ve seen it with Hunt: Showdown, and obviously with PUBG. The latter got away with it because it offered something no other game did. In hindsight, we were too busy figuring out this new thing to knock it down too much for technical problems.

I am happy to see Define Human not repeat these mistakes, and it makes it easier for players to look forward to new content and gameplay changes when they’re not still shouting about the same issues months after launch.

Battle royale has been the most interesting thing to happen to multiplayer shooters since Modern Warfare introduced perks. We’re in the gold rush era where everyone is trying to make something out of BR or work it into their existing designs.

Poorly or hastily produced battle royale games are inevitable, but it makes the good attempts all the more exciting to watch and play. For a game with such a simple premise, Islands of Nyne is firmly in the latter camp.