inFamous: Second Son is the first big PS4 exclusive of 2014, and it's going to deliver a personal experience for every individual. VG247's Dave Cook speaks with Nate Fox from Sucker Punch about morals, tech and persecution. 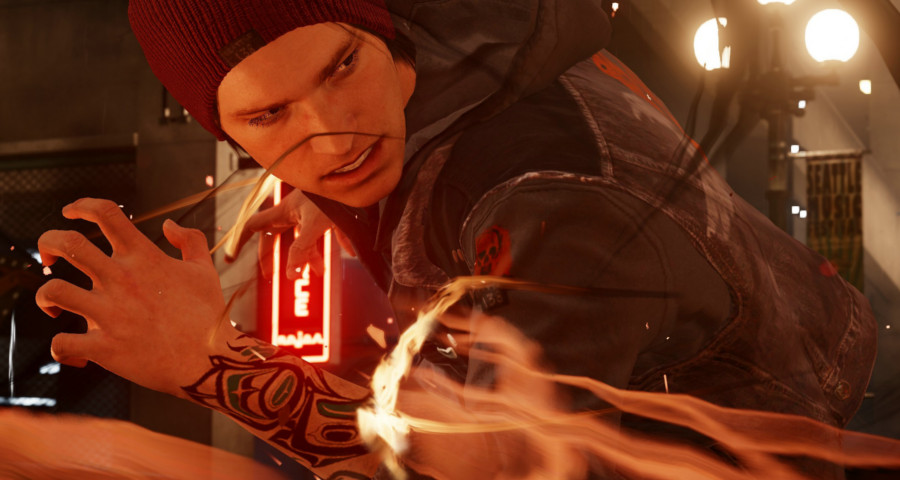 “Our game is absolutely in response to the kind of ‘fear mania’ surrounding the hunt for terrorism. It’s not that terrorists aren’t real or they’re horribly dangerous. We should be worried, but to fear your neighbour, to fear every day society and not embrace people while keeping a watchful eye out is something we’re trying to talk about in the game.”

For a while in the last generation, moral systems were all the rage. Mass Effect posed players with a plethora of tough, head-scratching conundrums, Fallout 3 asked you either detonate or disarm that bomb, and The Walking Dead has reduced many steel-hearted gamers to blubbering wrecks. It was a trend that began with relatively simplistic choices, but has since grown more complex.

Over time developers have learned how to add depth to the binary nature of moral choices. It's no longer a simple split between good or bad decisions, blatantly marked so that you know right from wrong. Real emotional weight comes with throwing players into a snake pit of shrouded options and blind-siding them with unforeseen consequences later on in the plot. Those are the real puzzles that tug at the heart and drill guilt into the mind.

The lines between heroes and villains has become blurred, and this is something inFamous: Second Son developer Sucker Punch has woven neatly into its PS4 sandbox. Stace Harman recently quizzed director Nate Fox about the game's moral choices on these very pages, but we recently spoke about it a little deeper over the phone. While the game will make clear when you've walked the 'evil' path, the consequences will not become apparent right away.

Fox explained that we're living in a very different world compared to when the original inFamous launched, and that Second Son was influenced by real-world terrorist threats. The enemy is no longer depicted as a rogue state or army marching towards its target, but perpetrators veiled in plain sight, indistinguishable from your neighbour. They're ordinary people often fuelled by extraordinary circumstances, strong beliefs or oppression. They're people like Delsin Rowe.

Second Son begins seven years after inFamous 2, and the world is gripped in a state of fear. Conduits are routinely hunted and punished like criminals by an organisation called the Department of Unified Protection, so that those with super powers can't use their abilities for evil. Because Conduits are indistinguishable from other humans, everyone is a potential threat, leading to an existence governed by security checks, suspicion and control. It's a poignant setting, especially after recent surveillance leaks out of the NSA and GCHQ.

"Our game is absolutely in response to the kind of 'fear mania' surrounding the hunt for terrorism," Fox explained. "It's not that terrorists aren't real or they're horribly dangerous. We should be worried, but to fear your neighbour, to fear every day society and not embrace people while keeping a watchful eye out is something we're trying to talk about in the game." 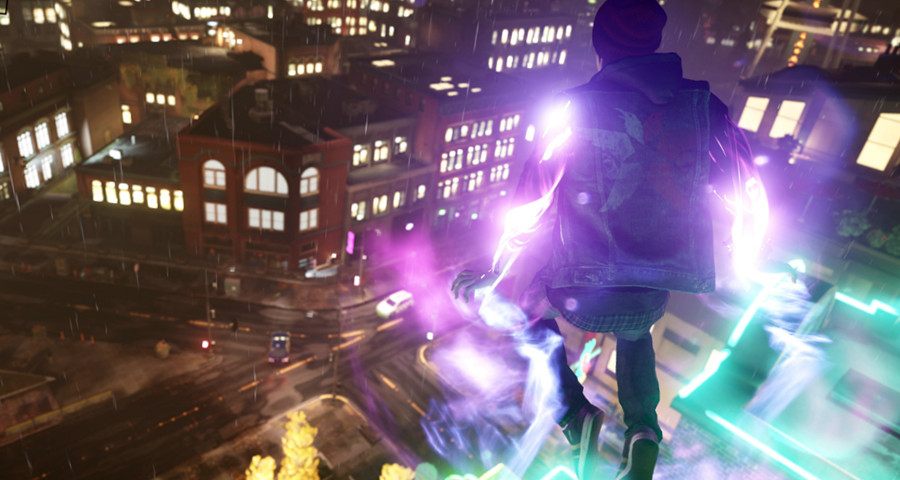 This theme serves as the foundation of Delsin's relationship with his brother Reggie, an ordinary cop thrust suddenly into a world of super powers and conflict. It's clear from the inFamous: Second Son trailers that Delsin actively begins a crusade against the DUP and the established order, bringing anarchy and terror to the city streets. Reggie's beliefs and his commitment to both law and order in a world gone haywire will be tested depending on the player's moral compass.

“Most of them play first as a good guy because we’ve been conditioned by society not to speed and help old ladies cross the street. But then they play through again, and they’re the most evil sons-of-guns you’ve ever met. They enjoy being evil, but they’ve got to get the good guy experience out of their systems before they allow themselves to be the jerks they are in their heart.”

Fox added, "The relationship between our hero Delsin and his older brother Reggie is very core to the story because Reggie represents the common man, and their attitude towards anyone who's different - in this case - anyone with these powers who are kind of demonised in the inFamous world. Throughout the course of the game, depending on what sort of person you are, you change not only Reggie's attitude, but the attitudes of society about anyone who's different."

You'll see the pair squabble in the game, and Fox stressed that with the power of PlayStation 4 behind his team, Sucker Punch has crafted a visually arresting world filled with civilians that react tangibly to Delsin's presence. If you prod the city, it will kick back in various ways, underlined by convincing facial capture from star Troy Baker and the rest of Second Son's ensemble cast. All of this combined with a story about super powers should have resulted in a wildly abstract premise, but Fox stressed that the aim was to keep everything as grounded as possible.

"We've always said that the inFamous series is about an everyday guy who gets super powers and decides if he wants to use them for good or evil, "Fox continued, "and that's still true in Second Son - except - we've tried even harder to make the world relatable, true and grounded so that these super powers are plausible, you believe in them. The game world does react to you. You make choices throughout the game with pretty serious consequences, so that serious choice and consequence theme is still there. You matter in that world."

"Where we're trying to break new ground on, frankly, is really integrated powers that are totally intuitive in how you use them," he added. "We redesigned the control interface so that people who are not expert players can pull of spectacular moves, as well as putting time into trying to make our narrative as potent as possible. A lot of that comes from doing facial motion capture so we can get these very nuances performances from the actors. All of those things come together to make it easier to get sucked into the screen and lose yourself in the moment which, with anything next-gen, it's got to be that, right?"

Fox revealed that Sucker Punch took its control cues from skateboarding games, which are known for gripping players in an almost hypnotic flow as they trick and combo their way across the environment. The same is true of Delsin's smoke and neon powers - as well as some unannounced abilities that the team doesn't want to spoil pre-launch. Fox wants you to feel like Spider-Man, swinging through New York at break-neck speed, feeling brilliant as you go. That fun, however, will hit moral choke-points now and then, dragging you back into a position of grave responsibility.

He explained that the branching narrative paths will result in a tailored personal experience forged by the individual. "The choices you make along the way will not only impact Delsin's story, but also the way that his powers mature and evolve, and the way other characters around you evolve and change. It's very, very different. You've got to play the game twice to see it all." 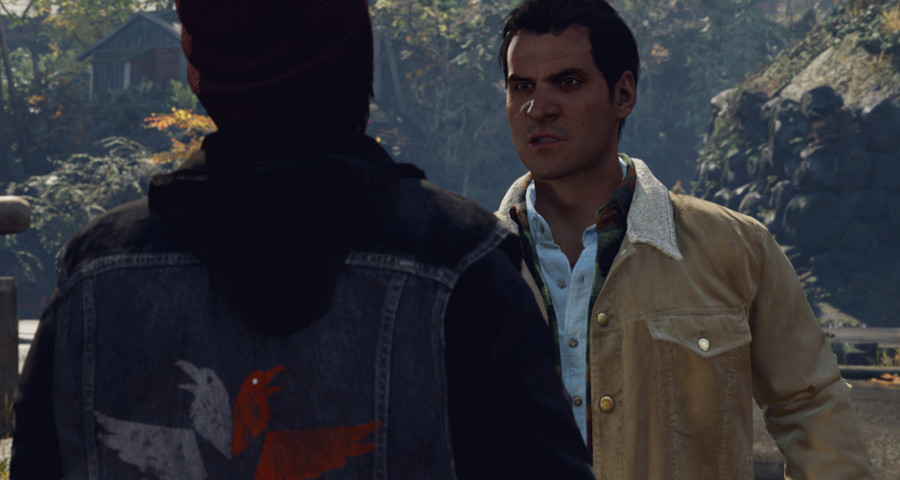 Once you make your decision the game will let you know through various methods if your choice rested on the good or evil side of the moral fence, but again, just how this will impact your progress and the world state down the line won't be immediately clear. That feeling of not knowing exactly what you've just done, and suspecting that something ugly or perhaps even righteous is about to happen out of nowhere will drive players on.

"We try and make it pretty clear when you've done something evil," he added, "mainly because it really sucks when it's nebulous. It's not fun to feel like, 'Well I think I did the right thing in that videogame,' because there's so much you have to understand about the rules of the world, your abilities, what the mission is asking you and all of that stuff. We try to cut down on ambiguity as much as possible, but at the same time we try to put situations in front of the player that are frankly tough, because that's what games are good for; they can transport you to places you've never been and let you do things you've never done before."

From what Fox has seen in play-testing, everyone plays nice at first. Once the end credits roll they hop back in and become total jerks. "We do our damnedest to make it fun in both directions, but in my opinion you've got to play the game twice to really experience inFamous: Second Son. I know from watching people play the game, that most of them play first as a good guy because we've been conditioned by society not to speed and help old ladies cross the street.

"But then they play through again, and they're the most evil sons-of-guns you've ever met. They enjoy being evil, but they've got to get the good guy experience out of their systems before they allow themselves to be the jerks they are in their heart."

As something of a tease, Fox recalled that when deciding which of inFamous 2's endings to carry over to Second Son, the studio looked at the trophy data to see which of the two people picked most. The same practice will be used in the PS4 title and will inform the team where it goes next. He hinted, "We're absolutely going to be looking at trophy data to see where we go next but I couldn't tell you which trophies we'll be looking at."

While inFamous: Second Son labels its moral choices clearly, it'll be interesting to see just how far they'll impact the broader narrative. Fox promised two very different play-throughs depending on how you act, so it's clear that though the initial decisions are well-signposted, the knock-on effects are not. I'm expecting many a plot twist already.

I had to close by asking Fox if he'd had a chance to play Saints Row 4 yet, primarily because of its melding of sandbox staples and super powers. He replied, "I haven't had a chance to play it yet and I'm really excited to do it for two reasons. One, because Troy Baker is in the game and I love that guy, he's a solid human being. Particularly, I hear that you get to play through the whole game with your avatar in the nude."

He's not wrong, but does playing nude make you good or evil? I guess that all depends.