As Square Enix launches Deus Ex: Human Revolution in Europe and the UK, a documentary on real-world augmentations based from the game airs. Johnny Cullen speaks to director Rob 'Eyeborg' Spence. 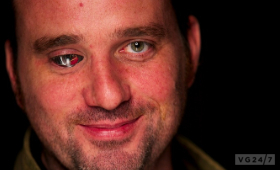 Spence is a Toronto-born documentarian who's made films for Discovery, CBC (Canadian Broadcast Corporation) and Space TV.

Lost his eye as a teenager after a shotgun accident on a farm owned by his grandfather.

Removed his original false eye to fit a bionic eye which featured a camera inside.

The new eye was called one of the best inventions of 2009 by TIME Magazine.

Rob Spence is not your normal, run of the mill documentarians. As noted in a documentary he made to celebrate Deus Ex: Human Revolution's release in Europe and the UK today, he was involved in a shotgun accident which seen his right eye removed.

But he recovered from the accident by augmenting himself by having a bionic eye with a camera implanted. It seems like Spence, otherwise known as Eyeborg, was a perfect fit for something Square Enix was cooking up with Deus's release. But how were they able to find him?

"They found me because most nerds know Eyeborg. People who were kinda hanging out online and checking out cyborgs and stuff," Spence tells VG247 in a short phone interview earlier today.

"Jon Brooke [head of marketing at Square Enix UK] got in touch with me and we had a nice chat. And I got a camera eye, the main character in this videogame [Adam Jensen] had a camera eye and I make documentaries. So i said, 'you know what? why don't you guys get me to run around the world and interview what we have now and do a comparison to what is in the fictional world in 2027 in the world of Deus Ex: Human Revolution.'

And so he did. Earlier this morning, Square released a 12 minute documentary coming from Spence on augmentations around the world and how that compares to Jensen's in the cyberpunk futuristic world of 16 years from now in 2027. But in order for it to work, it needed a close collaboration with the development team at Eidos Montreal.

Being a Toronto native, it wasn't too difficult of a trip to Montreal for him.

"I met them before I took off to do the documentary to play the game, check it out, talk to the story people, the writers," he says. I spoke with Mary [DeMarle], who was the writer, the game director [Jean-Francois Dugas] and the art director [Jonathan Jacques-Belletete] and got a sense of what was going on with Adam Jensen who I kinda look like [laughs]. And went from there."

With the game now formally out everywhere - it released in the US on Tuesday and, obviously now, today in Europe and the UK - players are now getting to grips with the game and progressing at their own rate. He admits he hasn't fully played it, but gives the impression that he's actually finished the story.

"I haven't played it in full because it's been a bit of a tear. But I played enough of it. To get all the way to the end is quite a task, it's not Halo, is it?," he said.

"I played enough of it and then really got into the nitty gritty of the story, what the augmentations were and what the world its in has been created with the people who created the game so that I'd have a good sense on how to do this documentary."

But while the main aim is to talk about the documentary, we have to ask, considering it is the main subject the game revolves itself around, about augmentations. It's something that Adam Jensen, Human Revolution's main protagonist, encounters after certain events near the start of the game, whilst Spence has his cyborg left eye. His documentary gives the impression that augmentations are not too far away from being a reality in becoming more widespread. And speaking to me, it's something he backs up.

"Well right now, they've begun making neural prosthetics. Most of the prosthetics now are the highest end stuff, it's actually being used and commercialised are using kinetic sensors. That means, for example, a high limb - arm by touch bionics - the way you open your hand is that you flex what's remaining of your forearm muscle, same way you would when you naturally open your hand.

"When you close it, you flex with your remaining under forearm muscle, whatever the hell that's called. And that's a kinetic sensor way of doing things. Same thing with the legs."

Spence continues: "What they're trying to do now, and they've begun experimentation with this, is jacking straight into your nervous system. So you think about opening your arm and it happens. There's a fellow in Italy who doesn't wear the arm yet, they're just beginning, but he has had surgery and sensors put into his nervous system.

"So he's on one end of the room and the arm is plugged into a bunch of computers and he thinks about opening his hand and lo and behold, it happens. That is just beginning, those are the kind of prosthetics that Adam has, they're neural prosthetics. That is beginning and it's moving ahead quickly."

Square's live-action trailer on
augmentations for the game.

And as judged by the live-action video that Square released to promote Deus Ex a couple of weeks back, reaction to being augmented in 2027 is not the best of times. Homeless, poor, sick and even death is what happens when the body rejects augmentation, going from the video. But there's also another kind of rejection: those who plainly say no to augmenting.

Because of the quickness of its evolution, this could lead to fear. It was something I raised earlier today on the phone to Spence, and it's something he seems to agree on.

"People have two reactions just to my eye, which is that that's scary. But when people see my bionic eye, they say that's cool. But the very next thing they say is but it's a little creepy," he said.

"And what I think is happening is this, it's that the technology curve is becoming so extramental, that what we don't know frightens us. And between the time we were caveman until now, we're very much an advanced kind of human being: we're taller, we have pacemakers, we have contact lenses, we have clothing that is very high-end technology compared to a caveman, but that happened so gradually that there wasn't too much fear and confusion involved."

He concludes by saying this: "But the changes are happening much more quickly. So when change happens so quickly that it confuses you, confusion leads to fear. So in other words, yeah, I could totally see that happening."

Deus Ex: Human Revolution is out now on PlayStation 3, Xbox 360 and PC. Rob Spence's documentary on augmentations can be found above.