Season One for Hitman is wrapping up, which means player have one more shot at an Elusive Target.

The final Elusive Target for Hitman Season One will go live tomorrow, July 14.

This target, known as The Entertainer, will be in Marrakesh via the A House Built on Sand Bonus Mission for 10 days. Agent 47's has two objectives: Eliminate Mr Giggles, which is what the target goes by, and then locate and acquire the client list.

A video for the last Elusive Target hasn't been released as of press time, so the image below will have to do for now. 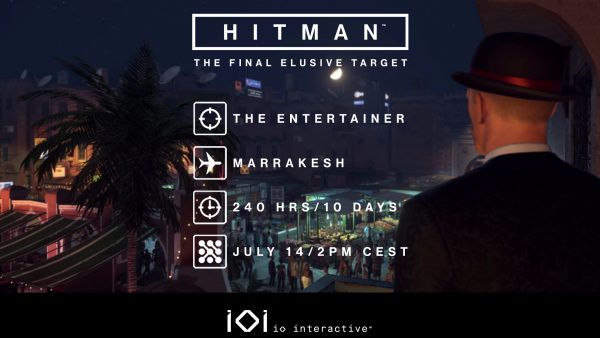 Those who complete the Elusive Target mission will be rewarded with the Summer Suit with Gloves, along with the Terminus Suit if this is the player's first Elusive Target contract completed with the Silent Assassin, as previously reported.

Earning this rating will also count toward progress for unlocking the Winter Suit. According to IO Interactive, at this point, the player will have needed to earn four Silent Assassin ratings from the previous 12 Elusive Targets before starting The Entertainer.

Finally, in case you were confused over the rewards for Elusive Targets and the requirements for earning them, have a look at the information posted in the next image. 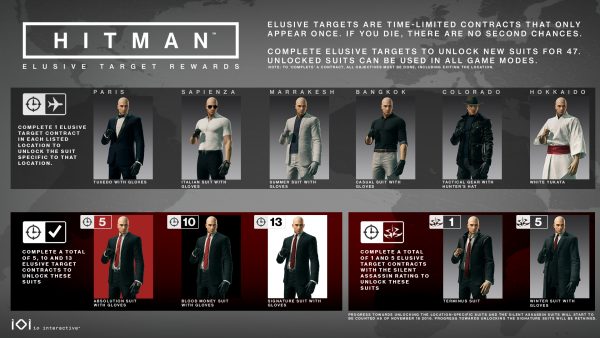 While The Entertainer may be the last Elusive Target for Hitman, it doesn't mean players won't be handed any extra content in July or August for that matter.

A new game update is planned for later in the month, with IO stating it will share more details and full release notes closer to release. New challenges will also be added to the August Content Schedule, and announced a later date.