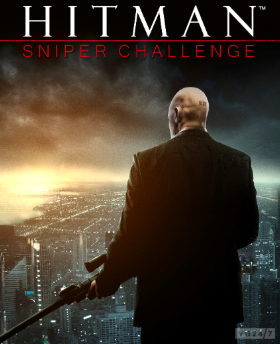 Hitman: Sniper Challenge is a free experience being offered for anyone pre-ordering Hitman: Absolution from selected retailers. It is a stand-alone ‘hit’ in the Hitman universe and is intended as separate content for fans to enjoy whilst waiting for Hitman: Absolution to be released.

Playing the Sniper Challenge will reward the Silenced Agency Kazo TRG for use in Hitman: Absolution. Players will also have the opportunity to unlock a further 12 weapon’s techniques.

Few publishers can hope to enjoy the prolonged longer term sales of a FIFA, Call of Duty or Zumba Fitness title. Most must look to a big bang approach, making as much noise as possible leading up to launch in order to score impressive short term sales success, which can then be built upon through positive word of mouth and the periodic release of downloadable content.

In recent years, this desire to raise awareness of upcoming titles has led to increasingly regular deals being struck between publishers and retailers that result in retailer-specific pre-order content: a plastic figurine, here; time-limited exclusive DLC, there. The retailer, able to boast an exclusive – albeit slight – variation on other retailers’ offerings, promotes the title more heavily than it otherwise might, which in-turn leads to increased sales and so everyone wins.

Everyone, that is, except the consumer, who would actually quite like it if all of the parts of the game they’re paying money for were in one place; not scattered to the four winds and across half-dozen retailers. However, for the most part it seems unlikely that these trinkets, virtual or otherwise, do much to actively incentivise those that had no intention of pre-ordering in the first place.

Instead, it seems more realistic to surmise that these offers simply capture the attention of the avid fans that are going to pre-order a game based on other factors; a pre-existing passion for the franchise, a well-orchestrated marketing campaign or perhaps even glowing previews in the specialist press.

IO Interactive is attempting a different approach. The Danish developer is offering those that pre-order Hitman: Absolution a stand-alone game-play experience in the form of Hitman: Sniper Challenge and whilst in the US this offer is limited to behemoth retailer GameStop, PAL territories will have a much greater choice of where to shop.

The development of Hitman: Sniper Challenge is important for a number of reasons, not least because when it launches for PS3 and 360 on Tuesday May 15 it will be accessible some six months prior to Hitman: Absolution’s recently confirmed worldwide release of November 20; this contrasts sharply with most pre-order bonuses that are only useful once the game they accompany has launched.

Moreover, Sniper Challenge will offer a first run-out of IOs new Glacier 2 game engine and, as such, is representative of the quality Hitman: Absolution. This isn’t a taster piece or companion app developed for Facebook, Flash or smart phone, this is a polished product with art assets, voice work and game-play concepts from the final game, developed by members of IO’s core team and into which a substantial amount of time and effort has been invested.

“We had a prototype of [Sniper Challenge] some time ago; around 18 months ago, I think,” explains IO producer Luke Valentine. “It came about as a result of some downtime for one our level designers and a programmer; they built this grey-box rooftop and we had a leader board in place. The mechanics were there and it became popular internally, so the idea was already established, from that point on we really only considered this route of making it a standalone [experience]."

Those basic mechanics are predicated on a timed score attack challenge with worldwide, national and friends-list leader boards. At the start of Sniper Challenge, Agent 47’s long-time Agency handler, Diana Burnwood, introduces the terms and requirements of this latest contract: to assassinate the head of an arms manufacturer and eliminate as many of his security personnel as possible, this unusually bloody massacre is attributed to the client wishing to “send a message”.

The target is attending a lavish rooftop party, which has allowed IO to introduce a crowd of civilians to complicate proceedings as well facilitating a number of opportunities to use environmental kills or send bodies inconspicuously tumbling off the building, essential for achieving the coveted Silent Assassin rating.

The base score is enhanced by a number of round-specific factors, including headshots, kill streaks, time remaining and bullets used. To encourage repeat play, score modifiers earned by completing challenges in one play-through remain unlocked in subsequent play-throughs, permanently increasing the score bonus.

A number of rewards are available for achieving high scores, such as controlled breathing, an extended magazine clip or faster reload times, all of which further contribute to the ability to reach higher scores further down the line. The leader board aspect is key to the appeal of Sniper Challenge and an integrated message centre ensures players are kept informed of how their friends are performing.

After several play-throughs of Sniper Challenge its appeal is evident, even in offline mode; as Agent 47 sits cross-legged, surveying the rooftop through a sniper scope and planning the order and timing in which to eliminate targets, the experience offers a taste of what it’s like to step into the shoes of this calculating, methodical and consummately professional anti-hero. A delicate squeeze of the trigger slows time and allows the perfect shot to be lined up, which requires a leading of the target in order to find its mark, and firing the sniper rifle delivers a satisfying crack and propels the target off their feet.

AI is occasionally foolish, refusing to take cover even after 47’s stealthy assassination attempts have been rumbled, but taking out isolated targets one at a time and finding creative ways to hide the evidence without being able to get up close and personal is eminently satisfying.

Hitman: Sniper Challenge is IO Interactive’s response to the notion that pre-ordering has become a messy affair for consumers and in recognition of the idea that pre-orders are perhaps a tougher sell than they used to be. By offering a game-play experience months before the launch of Hitman: Absolution, IO and Square Enix are offering fans the chance to delve into Agent 47’s world and for Hitman debutants to discover if they have a hidden flair for spilling virtual blood.

Dissenting voices tempted to cry foul that Hitman: Sniper Challenge is only available to those that pre-order a full-price game would do well to consider that what this effectively amounts to is a polished slice of game-play for free. It’s a bold move to stoke greater interest in an IP that already has a proven quality track record, but as Valentine succinctly sums-up, "Why do something boring when you can do something cool?"

Hitman: Sniper Challenge is available on PS3 and 360 from May 15 and August 1 on PC. It can only be obtained via a redeemable code issued by retailers upon the pre-order of Hitman: Absolution, which launches worldwide on November 20.