Disguises are one of Agent 47's coolest mechanics. We get the scoop on the best-dressed assassin in the world as we talk to Hitman: Absolution's art director Roberto Marchesi.

The fifth in the Hitman series, which centres on Agent 47 killing people in monumentally violent ways.

Based on IO's Glacier 2 engine.

Agent 47's character design is simple and elegant and reflects his personality. Hitman's protagonist is a businessman, a professional, and his near-supernatural tailoring reflects that. You can't go wrong with a well-made suit, the entire franchise seems to be arguing. Agent 47 isn't just well-dressed; his iconic style regularly makes way for more daring jaunts into the realms of costuming, as he infiltrates a huge variety of situations.

VG247: You're the art director? I have some very specific art questions.

Appear to be magical.

What do you mean by that?

The piece of artwork I'm thinking of, he's cradling a rifle and sitting in front of a billboard. It's promotional art.

And his suit trousers perfectly cover his ankles. You don't see his socks.

And you never see his socks.

So they're magical pants.

No! he's just stylish. He dresses so well, he just - he's got a tailor that makes clothes for him so well that they just fit perfectly every time.

But when he sits it should lift a little, because his knee bends and the fabric bunches.

This would be true for most people but he is so cool that pants just don't abandon him.

And that explains how he can change in and out of disguises so quickly because of his deeply professional approach to clothing?

That and gameplay reasons. That is actually a very interesting point you raise there because we are always at odds with gameplay. We want to make a game that is both beautiful to look at, but also that feels responsive when you're playing it. This is a balancing act that we have to go through every time we decided what he should be doing on screen. Every time he picks up an object, he goes into cover, he aims his gun, changes his clothes. We have to make a judgment call on what would work best in the given situation. Yes, the clothes do appear on him the way they do, but on a gameplay level I do believe that is the best compromise, to have a smooth experience.

So I'm unofficially writing into the lore that the reason that happens and you don't see a transition is because of how smooth he is with clothes.

I can live with that.

It's canon now. How many disguises are there?

I think we are approaching the hundreds. There are something between - oh, at one point we were close to a hundred. But there's lots. there's enough to satisfy most tastes.

Can you ever put him in a dress?

Do you want the true answer?

Then it is yes.

Really! Yes. This is gold. Why? How? Can you tell me or is it too spoilerific?

It is spoilerific. The funny thing about him is his looks, his classic looks, the suit the red tie - they're iconic, they're our brand, and we really don't want to tamper with them. There's nothing to be gained by doing so. Where we can actually have a more free approach is whenever he takes those clothes off and gets dressed. What makes him cool is that he's not afraid to change his appearance in a drastic way. Just to get the job done. He will do whatever it takes just to do it; he can do it, he has no problem with it. Some of the clothes he can put on during the game are more serious, like the guard outfit, plumber outfit and so on, but some of them are definitely more outrageous, and you will get something that I think will satisfy most tastes.

Are there any where he has his shirt off?

You can get him with a bare chest.

These are really excellent answers. I'm so glad. I thought you'd be like no, no, there's none of that. Dress ups are kind of my favourite thing.

Funnily, that's the good thing about the franchise; people perceive it completely differently. That's the biggest strength of it, because there is no right or wrong way to play it. Some people see it as really serious, because fundamentally it is kind of a serious matter, you have a pretty harsh profession and it should be taken seriously. Other people they just latch onto the crazy stuff.

Also the way you play it: some people just play silent assassin, where if you take out your gun by default you're losing, and other people just shoot everything that moves. But there is nor right or wrong way. Perception changes. Some people will probably really latch onto Contracts. Other people just really want to see the funnier disguises. And that's cool.

It does encourage quite a lot of playfulness, just in in the experimentation and approach; that sandboxy thing. Like at the end of the level it shows you which items you found, so there is a real incentive to go through every room and look for everything, which is really neat. But it's also a little bit hard; do you see that as something that mainly expert players would be doing?

This is something that we have focused on in our hunt for accessibility: not to make the game easier, but to tell the player there are options. We don't want them to just stroll through it and don't feel a challenge; we want them to know 'you could have picked up this, you had X here, you had this thing over there, you didn't poison the King of ChinaTown; you didn't steal his cocaine'. It doesn't necessarily mean that you have to play through it over and over again - that's just for completionists and trophy hunters. Just to tell people what their options are because the game is quite creative and free, and from there you can take it where you want.

How do you poison the King? I saw his drugs there and I thought about it, but I couldn't find anything to tamper with them with so I just shot him in the head.

I can give you a hint. Some fish are more poisonous than others.

Fugu! I am an idiot. I saw that there. That's really obvious. Damn. Okay that's clever. How do you drop the pallett on his head? 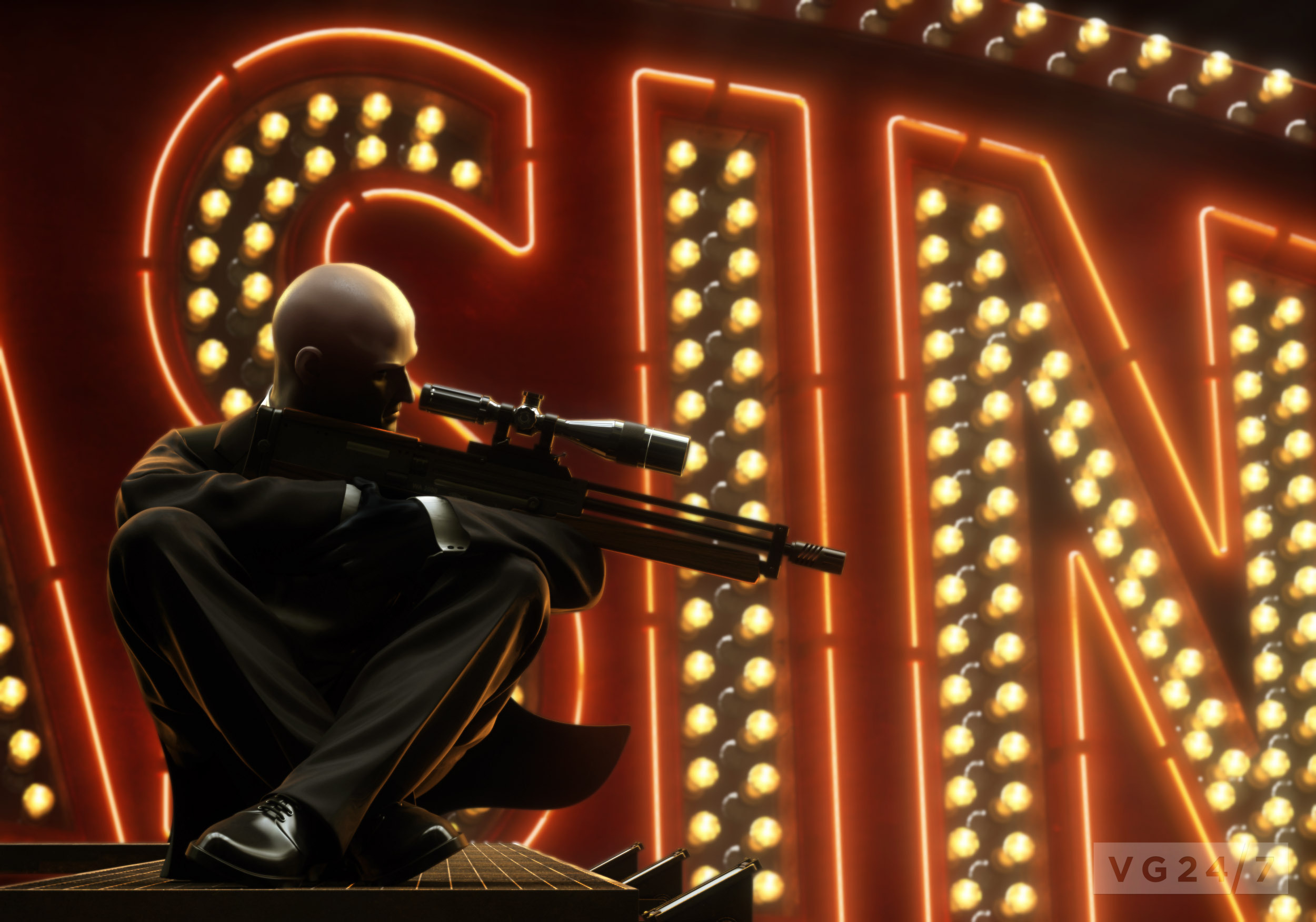 A high-resolution version of the image that
started this fiasco of an interview. Click for
the wallpaper-worthy, full-size version.

Do you just shoot it?

You have to get him there.

He just wanders over there.

Well, you can get him there faster.

How do you get him there faster?

I'm not telling you. You have to play the game yourself.

I wanted to shoot him in the head from the apartment and he kept wandering off. And then I, because I have the attention span of a goldfish, I would start looking around the room, trying to make Agent 47 do amusing things, and then I would come back and have just missed him. I was probably there for a good 20 minutes waiting to shoot him in the head.

I am happy to hear it. As long as you felt entertained and had fun in one room, I think the game has legs.

I really like the fact that all the environments are so busy. there's just so much to look at. You can read magazine covers and stuff. is that something you were really pushing for?

I think that was really important to us from the get go, to make a world that was as dense as possible and give you so many details that you could get lost in it. We didn't want to do it at the price of understanding and communication, but we did want to make it as interesting as possible to explore. We don't know if you're going to go out and shoot the guy - you can kill the King of Chinatown pretty fast if you know what you're doing - but if you're exploring? We want you to have fun doing it and spend time doing it. Especially if you're in a very stealthy mood, and you spent half he afternoon hidden behind a couch, we want to make damn sure that's the most beautiful couch you've ever hidden behind.

In Chinatown the crowd was really impressive. I think you said the engine can do 1,000 characters on screen?

In Chinatown I think we have 700. This is one of the small crowds. Chinese New Year has probably a thousand there, because it's bigger; you've opened up and there's more you can see. If you get to a higher point you can actually see many moe characters at a given time.

I got kind of hungry in Chinatown because there was all the sizzling and the flames.

The first time I saw those flames I was really happy.

Hitman: Absolution looks absolutely stunning whether it's on PC, PlayStation 3 and Xbox 360. It launches at the end of November.