The Season of Greed has arrived with free content for Hitman 3 owners every week, and coming soon, are two new Elusive Targets.

Hitman 3 will be following a seasonal approach throughout 2021 to support the Seven Deadly Sins DLC.

You can have a look at what to expect with the upcoming season in the video below.

The Seven Deadly Sins DLC, Act 1: Greed is currently live, and has players venturing to Dubai to indulge in a three-stage Escalation: The Greed Enumeration.

Playable now through April 12, this new escalation brings a seasonal twist to the Berlin location with new decorations and graffiti, a series of objectives, new gameplay items, interesting targets and an unlockable suit.

Two featured contracts are on the way, alongside a new Escalation called the Jinzhen Incident. Here, you will start off in the streets of Chongqing before heading to a facility to find your targets and "exact your revenge."

The first Elusive Target, the Collector arrives in Dartmoor today, April 9. The Collector will be in town for just 10 days and you’ll have one opportunity to take them out. Choose your actions carefully, there are no second chances.

This patch will prepare the game for all the new content arriving in that season as well as bring improvements, tweaks, and fixes.

Here's a recap of what to expect between now and the end of April and into May. 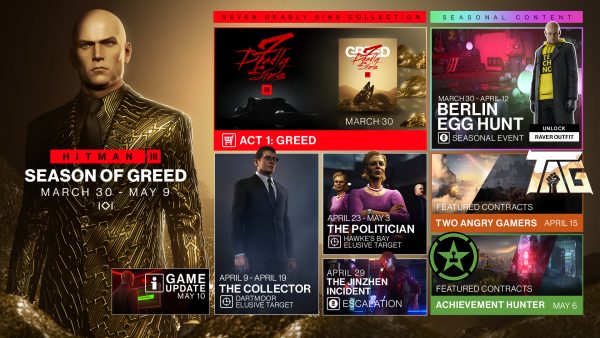