Nerding out about narrative in games with Dishonored 2's creative director. 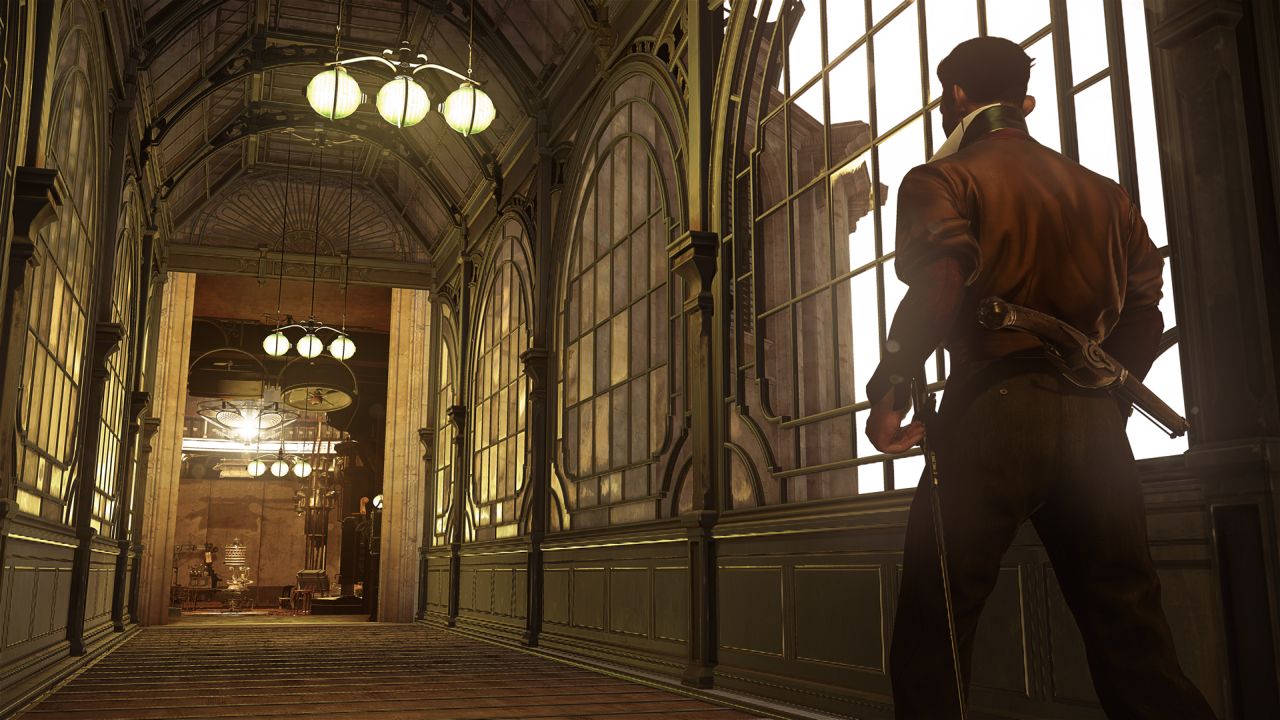 The level of Dishonored 2 Arkane Studios and Bethesda chose to show off behind-closed doors at Gamescom was more than a little bit mind-boggling. Every level in Dishonored has some unique mechanic built-in to it - at E3 we saw a light time-travel mechanic, and at Gamescom we're shown a crazy mechanical house that adjusts and rebuilds itself around you.

It's quite the sight, gigantic gears and clockwork mechanisms folding parts of the building away to funnel you down a particular path or close off an exit behind you. In the demo the player directly manipulates all this too, pulling levers to activate things and open up new routes or close off existing ones to escape enemies.

I'm particularly taken by design of the level; it's the home of a mad scientist type, and everything about the way this house is built seems to speak to his character. It's true enough that the fact that he sends scissor-handed robots of death after you speaks volumes about his character, but what says far more is the design of his home.

When I sit down with Dishonored 2 creative director Harvey Smith for our first catch-up since our exhausted chat at E3, we're both a lot more energetic and chipper - and we both have the thought process behind this striking new level and the thinking behind Dishonored 2's storytelling in mind. 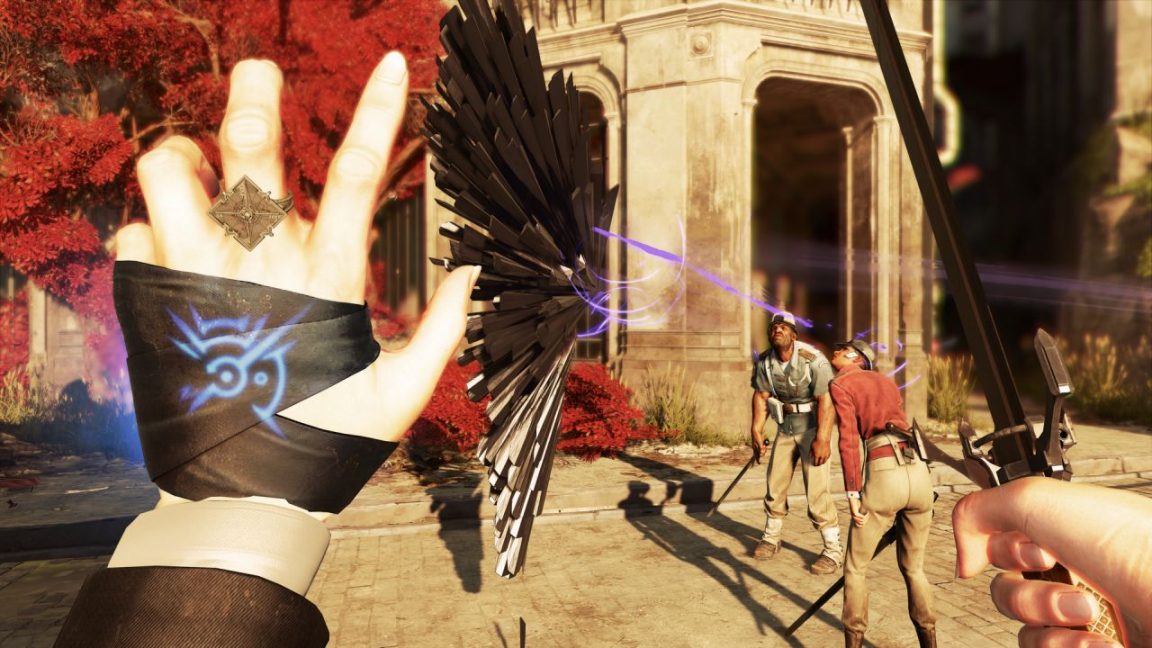 VG247: So, one of the things that struck me about the demo you're showing here is how storytelling and gameplay seem to be woven together particularly strongly. Was that particularly important to you?

It's true, historically, that studios tend to focus on one at the exclusion of the other. Arkane tries to be... I mean, audio is super important to us, right? We really think of all the disciplines, including level design, as a separate discipline from game design. We really respect that, and we have really strong leads in every single area. It's true.

The mansion seems like it's a character of its own.

Yeah, we've been waiting to show the clockwork mansion off for so long! So much work went into it.

It goes crazier than it looks. So, all the missions have some major themes. There's the ability to manipulate time in one, there's randomised dust storms in another... and then in this one the house is like a Rubik's cube. We can throw levers and reconfigure the rooms to trap an enemy on the other side of a wall or open up a new passage.

So if somebody told you that, you'd assume that some game developers went into an engine and they moved some blocks around and that's it. But, honestly... when you play this, if you look at the pieces that are moving, they've been thought about from the perspective of industrial design. 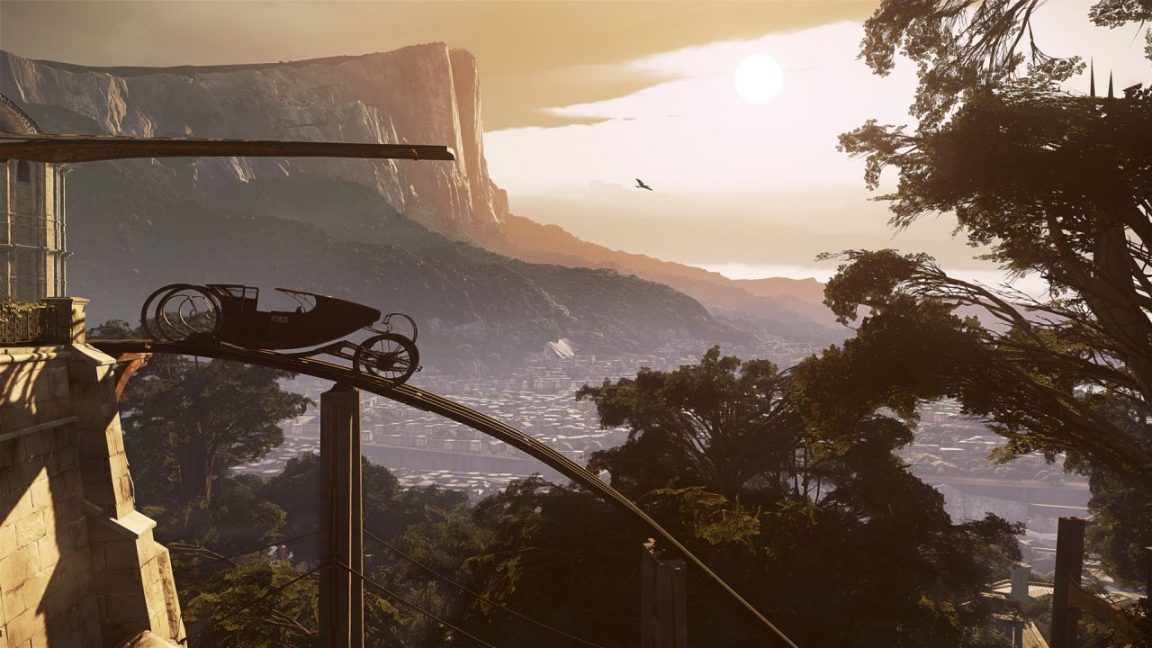 I mean, I'm fascinated by it. I didn't do it - the architect did it. I'm watching it, and I'm looking at the pieces that fold and get out of the way and ones that are geared... It's literally like, you could build this for real, and I can't believe I'm saying that. It's crazy. It's maybe a spoiler, but part of the clockwork mansion mission isn't just getting into the house, going after Kirin Jindosh and re-configuring the house... but you can actually get behind the walls, into the under-mechanism of the entire thing. So you can see behind the ornate Victorian pieces, you can see the mechanisms that are powering it all. It's functional. It's crazy.

The ones that are just the ceiling going up and splitting open and you see a skylight... okay - you can imagine how that might work, and you can get behind it and watch it. The ones that are crazy are like... There's some discs that are made of pie wedges that move... they'll move together and go down so that another one can come up and go out in this really complex way - and those are made to be functional. I'm so impressed with the architects on that.

What's interesting about this to me is that this house of his tells us a lot about this new character without him needing to say a word, something you don't so often find in games.

It is a statement about Kirin Jindosh. When we started working on him, we said... okay, this is a grand inventor. What does that mean? He's a natural philosopher from the mid-1800s in the empire of the isles alternate reality. He went to the academy of natural philosophy. Then we began to build his character.

He sees people as puzzles to be taken apart - he lacks empathy. He got kicked out of the academy of natural philosophy. He did lots of crazy things there that still nobody has been able to reproduce, but then he crossed some lines and got ejected. But he's utterly brilliant. He also worships Anton Sokolov. In the first game, Sokolov is the big natural inventor. Behind Jindosh's desk is a portrait of Sokolov. 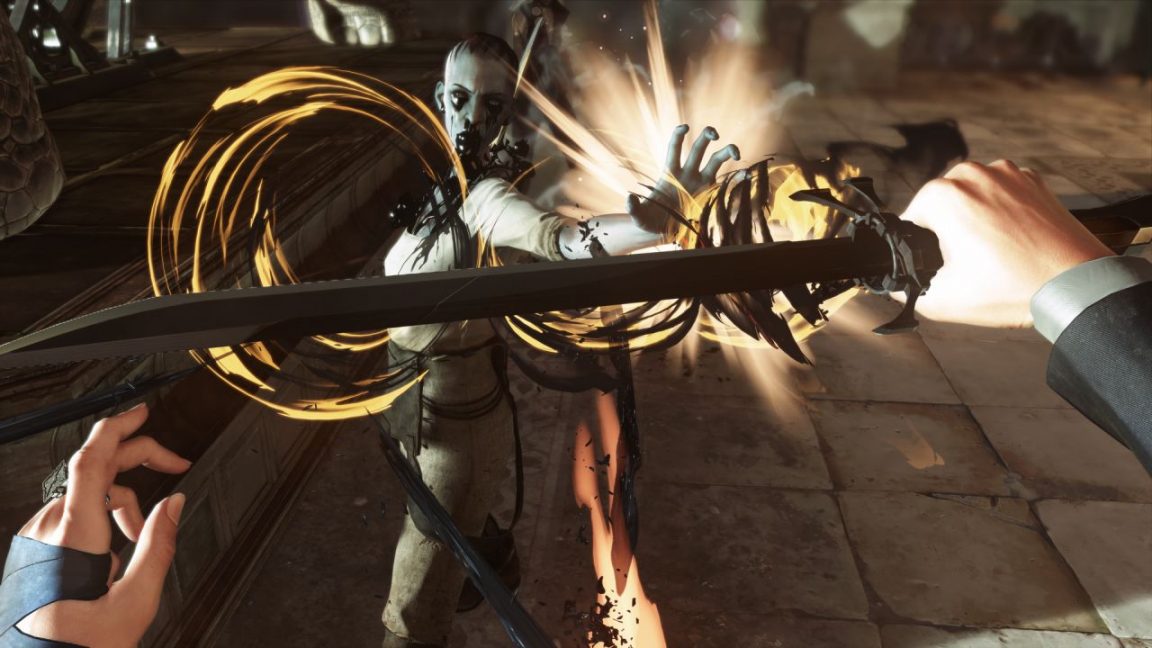 Then we said things like... he loves to hear himself talk. He's overly ornate in his designs, and that's what I told the artists. If he can build something functional but more elaborate, he'll make it more elaborate.

It began from there... this character is expressed through his house, through his machines, of course through his voiced parts. We found the perfect voice actor for him. Initially, even before they started his character design... do you remember the movie Stargate? There's a villain in Stargate played by the guy from Crying Game [Jaye Davidson]. It's a really unique look.

It's the old saying about... the statue was always there inside the block of stone, you just had to take away some pieces and there it is? It feels like that to us. 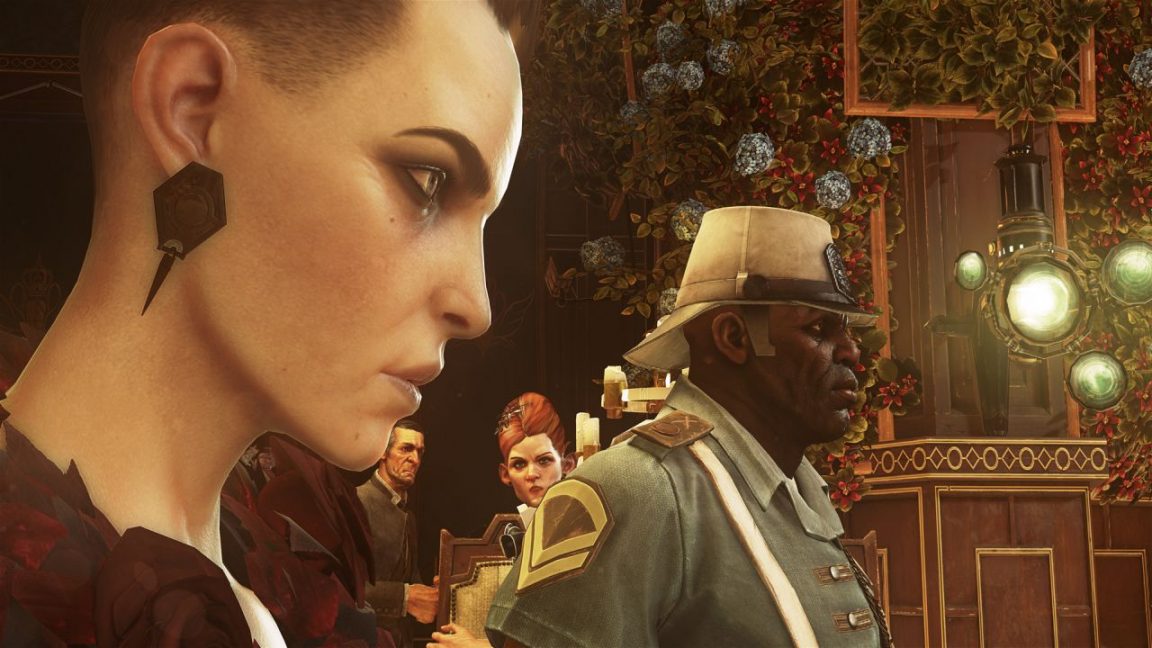 You've got some pretty significant story-driven games in your past, most notably Deus Ex. How do you feel about where storytelling is in games now?

I dunno.... I've been in games for 23 years now, and so far... it seems incredible to think about. When I first got the job I was making 7 dollars an hour as a tester. I didn't have my own computer, I had a clipboard for writing bugs and a 3DO. I sat at a folding table in the back of the room. Not even a desk! I thought... I'll have this job for about two weeks. That's what I thought, because it was a contract. And, er... now it's 23 years later and I work with amazing people left and right, y'know? So that's incredible.

What we do is commercial action games that try to have a soul. We're very dedicated to narrative, meaning that visually and in terms of the story, but we're also dedicated to sandbox gameplay. That combination has carried us a long way, and certainly the two or three times I've had the best success - Deus Ex and Dishonored - were a combination of that, right?

You ask about the state of games and... I look around, and I'm like, 'Holy shit!' The games I'm playing right now are Pokemon Go, Inside and No Man's Sky. Those are all amazing games in different ways, but if you just take No Man's Sky, Papers Please... you can name a handful of games that are just amazing games. 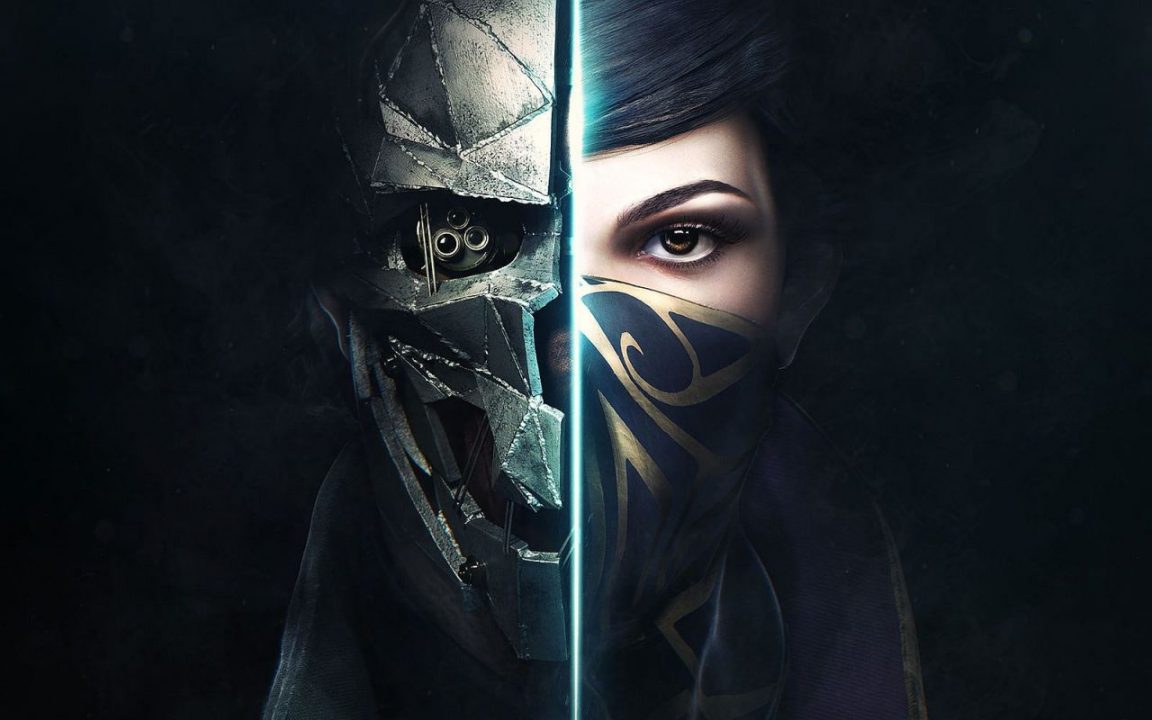 I was talking about narrative in games with somebody earlier, and just the way that something like Papers Please can lay narrative through mechanics is crazy. Y'know, in Papers Please you're serving this bureaucracy, and of course at first you start out very human. You're very sympathetic to the people coming in, you wish you could take time to chat with them all about their situation and do your job well.... but then the bureaucracy applies some pressure to you. They want you to go faster.

Then they tell you - the game designer tells you - that you have people back home. A sick child, a family that needs warmth, and you're being graded and paid based on how fast you go. The pressure to help your own family and to be less human for the bureaucracy is a statement that the game makes through its mechanics.

You could make a book - you can read lots of novels about this kind of thing; the gears of the system against the will of the individual. But playing it and feeling it through the mechanics is somehow different to other media. That's how games can be different.

Dishonored 2 is due for release on PC, Xbox One and PS4 November 11.