Yoshinori Ono and Katsuhiro Harada are coming together with Street Fighter x Tekken, a unique collaboration. The pair spoke to Johnny Cullen and Alex Donaldson in London earlier this month.

"I'm not trying to make Street Fighter x Tekken dominate the scene, but this really is a bridge between the communities, and I want to promote the fluidity between the two groups. I want to create a convection current."

If it wasn't for a strong fighting community - the same that watches technical fighting tournaments every week and the one that heads to Las Vegas every July for EVO - there would be no Street Fighter x Tekken.

But it's not just the super hardcore that brought around the collaboration of fighting producers Yoshinori Ono and Katsuhiro Harada. It's small events, like the recent Fight Club event Namco held in London earlier this month for games press and fans the next day, that were cited as examples.

"Events like these: Fight Clubs. It's not just London, we do them worldwide. Our intention today, obviously, is to get interactions between Street Fighter and Tekken fans, letting them talk amongst each other and talk about the game and like the game, so community is very important," Ono tells VG247 in a karaoke room in the basement of Namco Station, based on the banks of Westminster.

But in an answer to a question by Alex Donaldson, also at Fight Club for VG247 as part of a tournament for press that night, Ono says that he realises he can't force fans of each series to like the other.

What catches me by surprise is that the comment that comes next seems to suggest that Ono and Capcom are not just catering for old-school Street Fighter vets or Tekken fans directly, but also for those of other series, such as Sega's Virtua Fighter. If anything, Ono wants to reach out to the fighting communities that exist outside SF or Tekken with his game.

Teased at EVO 2010, announced at Comic-Con San Diego with European premiere in Cologne the following month at gamescom.

"I'm not trying to make Street Fighter x Tekken dominate the scene, but this really is a bridge between the communities, and I want to promote the fluidity between the two groups. I want to create a convection current."

Harada describes the conjunction of Street Fighter and Tekken as full of "magical possibility" and compares it to a meeting between earthlings and aliens.

"It's not as interesting if it's just people on earth. But the possibility that there is life out there is something that is kind of entertaining to imagine; if these two came together, obviously it's very exciting about the possibilities. Even though they might go to their original planets after that, there's still that energy there when it does occur."

In 2009, formal talks began between Ono and Harada on creating something like Street Fighter x Tekken, but loose suggestions were made between the two long before that. Even today, it's kind of hard to fathom how it all came together for both producers and both IPs, as Ono-san agrees.

"To be honest, it was unthinkable ten years ago for a Capcom producer and a Namco Bandai producer to be in a Namco arcade answering an interview: that would have been impossible. But obviously, our interaction starts and we want to push this out to the community guys as well," he says.

"Even though it was hard to imagine back then, In Japan right now, you see something in the news about us doing an event and people say, 'Oh it's Ono and Harada doing something crazy again,'" Harada adds.

"So that 'again' kind of states how things are right now."

Adds Ono: "The current situation's been so borderless now within Capcom as well, so even Capcom employees will start talking about doing an event, and we'll go, 'So yeah, we'll have Ono-san and Harada-san here,' without telling Harada-san about the event at all.

"They just think Ono-san and Harada-san are just a unit."

Both Street Fighter x Tekken and Tekken x Street Fighter are expected to further their genre, but when asked about where fighters might be in five years, the playful rivalry between the two creatives came into play, with Ono taking a jab at Harada's lack of progress on the joint project.

"First of all, you're assuming Tekken x Street Fighter will be out within five years," he jokes.

"Say its out within ten years - and then if you're talking about ten years after that, that's my retirement."

Ono says he'd be "really keen to do more things", but it would come down to how TKxSF performs; assuming it ever releases.

A video of Ono and Harada teasing
SFxTK and TKxSF at EVO 2010 before
its formal announce at SDCC.

"To be honest, I kind of forgot up until recently I had to do that game. 'Oh by the way, I do have to make this game.'"

Ono, on the other hand, has moved rapidly with Street Fighter x Tekken. With one collaboration on the table, surely he's up for another - Darkstalkers x Soul Calibur, perhaps? After all, it would seem like the perfect time. A fifth Calibur instalment is on the verge of release, while fans - and Ono himself - have been clamouring for a new Darkstalkers. Alas, no.

"That's not something they'd be looking for from the Calibur or Darkstalkers fans," Harada points out.

Street Fighter x Tekken will come with features to allow it fit in with the hardcore fright crowd, such as the Gem system and Pandora Mode, but it does also need to appeal to the more casual Street Fighter and Tekken fans. As Ono admits to Donaldson, regardless of skill class there's only one main goal with SFxTK: to let the player have fun with it.

"I'm wearing these clothes that says festivity. It's all about festival," he says, referring to the traditionally-inspired festival costumes both he and Harada are wearing.

"I want people to have fun and I want to obviously increase the population of the fighting genre. I want a wider range of people to play it. If you think about games like chess, you can't just say it's a hardcore thing or it's a casual thing. You can play it within the family and it goes all the way to world championships.

"I want Street Fighter x Tekken to be an accessible tool of entertainment for everyone. It's depends on you if you want it to be competitive or casual, but it caters for all. I don't want this game to become a yin-yang game."

And what about Tekken x Street Fighter? Harada says it will "take a darker tone."

So where exactly is Tekken x Street Fighter? Footage has been promised for next year, art of Ryu and Chun-Li has been shown, but as reported in May this year at Namco's LevelUp event in Dubai - and further reiterated in July - development hasn't kicked off. Surely something's underway if you're going to start teasing art? Not quite, says Harada. 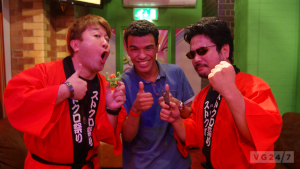 "Everyone I think on Twitter has kind of been misunderstanding my intentions when they start talking about the artwork, because Ono-san's wrapping up his case leading in towards the release of Street Fighter x Tekken," he says.

"It's kind of on purpose we're being quiet about Tekken x Street Fighter, because we don't want to confuse the players on which is which. On the backside of that, we haven't progressed very much," he admits.

So much for progress, right?

Street Fighter x Tekken releases on March 6 in the US and March 9 in Europe for PS3 and 360. Vita and PC versions are in development too. Tekken x Street Fighter currently goes without a date.