I’ve had a few demos over the years at various E3 shows in which I felt like I wasn’t really fully prepared.

Sometimes a game is just wildly different than I expected or ends up being more difficult or nuanced than I thought. But in the case of GTFO I had a game that I already knew about and was fully aware of what the team was going for. I’d seen the trailers, I’d done my research, and I thought I was ready.

And still, I wasn’t ready.

GTFO is one of the most tense and palm-sweatingly exciting games I’ve played this side of Left 4 Dead. The premise is simple: you and up to three others take on the role of scavengers that have been sent down into the depths of underground complexes to extract valuable artefacts. Before heading out on an expedition, you can pick your loadout of weapons, which includes a primary weapon, like an SMG or Assault Rifle, a secondary weapon, such as a Shotgun, a tool of some kind, such as proximity mines or an enemy scanner, and a melee weapon, like a sledgehammer. All of those are equipped to the 1-4 key on the keyboard with the 5 key used to equip your health or ammo packs. 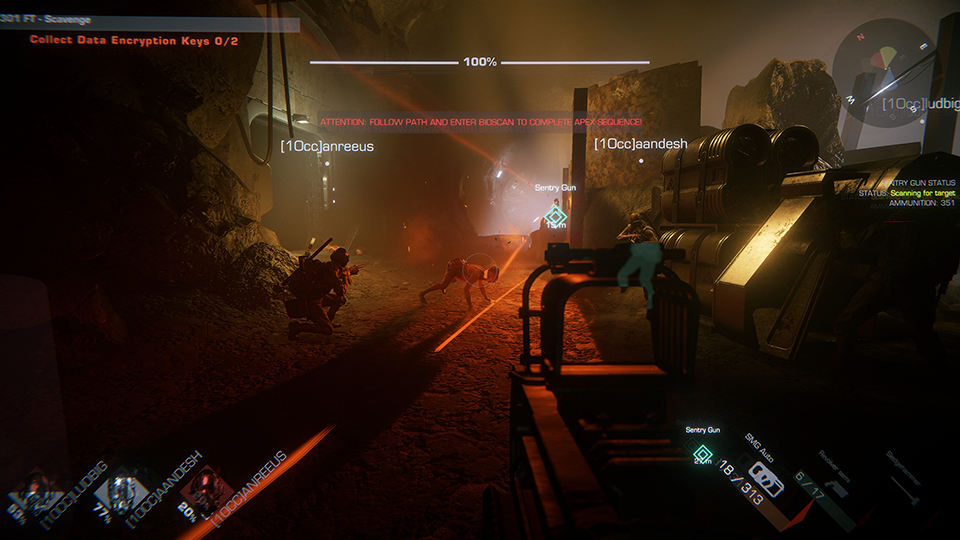 When we first landed inside the complex the three developers from 10 Chambers Collective I had on my team walked me through the basics. Our objective was to locate zone Z24. Painted up high on the walls I could see that we’d started in a different zone, so we needed to start out by figuring out where the right zone was. Since GTFO is such a hardcore-style game, it’s not as simple as just going to a waypoint.

In fact, you don’t even start with a filled-in map at all. One of the tools you can take with you on missions is a mapping device that you use by pointing it in a direction and activating it. It sends out signal waves that detect where walls are and slowly fills in gaps on your map in the direction you're pointed. It’ll also show red dots where enemies are located.

The developers told me that there is actually a dedicated enemy scanning device as well, but no one on our team was smart enough to actually select that tool. Probably not that useful, right?

My tool was a set of proximity mines. I could walk up to a wall or any surface, press and hold E, and then have a mine appear with a red laser across to the next surface. If an enemy broke the laser line then - boom! - explosion time. These were great near the end of the mission to set up around us at entry points when we knew we were about to trigger a flood of enemies. 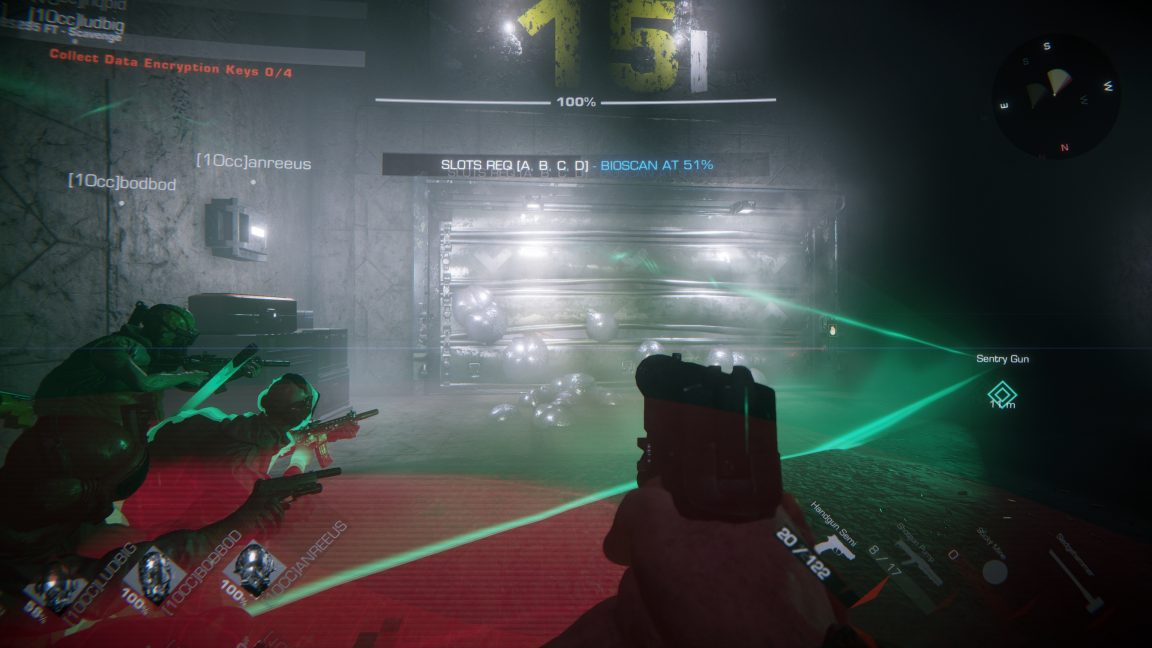 Another teammate had a glue gun equipped which sounds incredibly lame, but was actually very useful. Using the gun he could shoot out large globs of white goo to clog up doors and keep them shut for an extended period of time. It can even trap enemies as well. Trapping enemies in the goo and then running up to blast them with my shotgun was a fun way to combine our skill-sets together.

Since GTFO is a horror-themed co-op shooter, that means a heavy focus on creepy, horrifying creatures, lots of darkness, slow-moving sneaking across levels, and an overall palpably tense atmosphere. The thin layer of fog throughout the underground complex did a great job of lending a strong sense of isolation and mystery to everything.

I spent a lot of time with my pinky on the left Ctrl key to crouch, slowly creeping around corners. Most of the time once we cleared a room it was safe, but sometimes we’d miss stragglers that could give us trouble if we weren’t ready.

A big part of what makes GTFO so intense is just how relentless the enemies are. In my demo I saw three different types. The most basic enemy, referred to as Sleepers, would just stand in one spot or even potentially lay on the ground, in wait. If they were alerted by sound, light, or some other cue then they’d all awake in unison and come charging for us. But if you’re quiet, you can easily sneak up and take them out with a melee weapon.

The second enemy was the most frustrating and terrifying of the bunch - the Scout. These bastards didn’t pose much of a threat on their own, but if they were alerted then they’d screech and summon even more Sleepers to swarm the entire group. If you can take out the Scout quickly before it alerts the swarm, then you’re usually in good shape and only need to deal with the enemies already in the room. 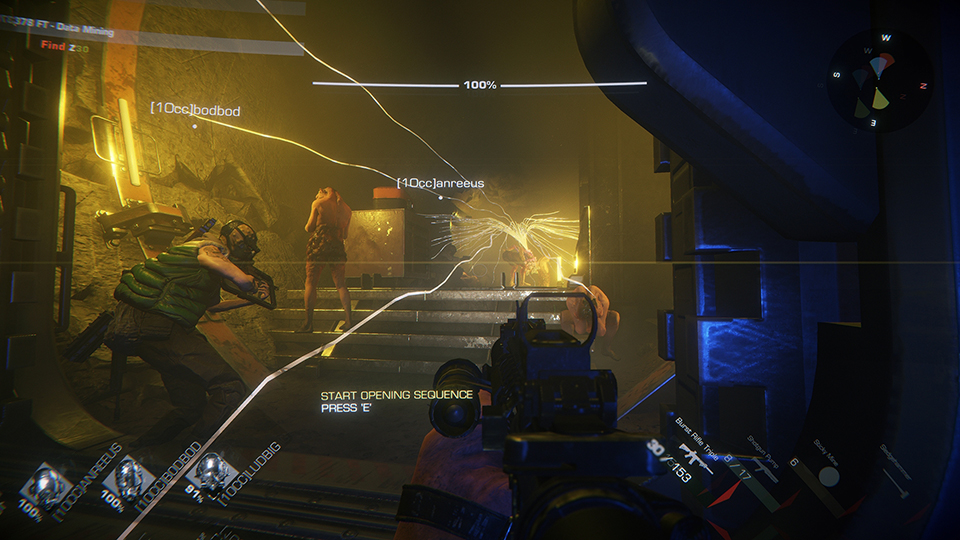 However, dealing with a Scout isn’t as simple as just keeping your distance. From time-to-time the creatures will freeze while standing, open their mouth/head in a strange distortion, and reach out with thin, white tendrils in an effort to seek out prey. If any of those tendrils find you, then that sets off the monster alarm and you’re screwed.

Which leads us to the third enemy type. I didn’t catch what these were called but they’re large, hulking masses of decaying flesh that can reach out with a massive, thick, red tongue-like tentacle that grabs you and pulls you in. It’s disgusting and I don’t recommend it. These big guys can take a lot of bullets, but you’ve got to focus on taking them down quickly before they wreak too much havoc.

What I loved about my time with GTFO is that even the most basic Sleeper enemies are terrifying in their own way. They’re so incredibly fast and love to mix crawling with running in such effortless ways that it’s often very tough to line up a good, clean shot. That’s probably why I loved using my shotgun so much.

Scattered throughout the level are terminals that you can hack to find loot like ammo and health packs. There were even a handful of basic little puzzle moments here and there. One door, for example, wouldn’t open unless we stood in a specified bio-cleansing zone until the percentage completion bar is full. That wouldn’t be such an issue except for the fact that all four of us had to be in the zone simultaneously and we were getting swarmed by enemies from all sides.

At the very end of the demo one of my teammates had to carry a decontamination tank on his back, rendering him unable to use weapons, while the cave was slowly being pumped full of toxic gas. Being exposed to the gas was harmful, so we had to all stay in a tight-knit group around the tank-carrying buddy as we slowly made our way back through the complex. 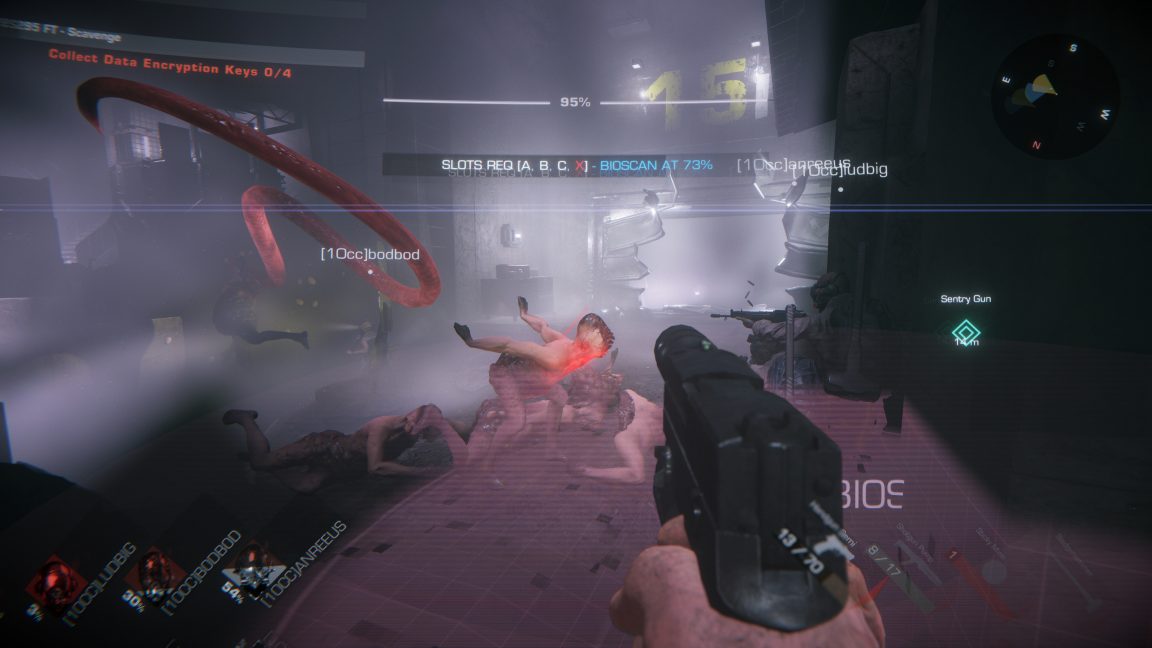 This is where my journey ended slightly prematurely as we got overrun without warning. I was still hurting from the last fight, no one had a med kit, and the swarms were just too much for us to handle.

The devs told me that GTFO uses a sort of hand-crafted meets procedural system to craft maps in the game so they still have a high quality feel over some of the more hodge-podge procedural systems out there.

The easiest comparison to make is Left 4 Dead, but GTFO also owes debt to Killing Floor, with a little scavenging and puzzles thrown in for good measure. But when the lights are down, the meds are thin and the tension is ramped up, GTFO is certainly shaping up to be one of the most tense and explosive co-op shooters around.

GTFO is slated to release on Steam for PC later this year.