There's still plenty of violence in the new God of War, but there's more to Kratos than rage and revenge.

Every past God of War game has opened with a battle. With his twin blades in hand, Kratos has torn enemies apart while control prompts are overlaid onto the screen. Players have been taught what the game is all about by getting their hands dirty, often while a city burns, a boat sinks, and things around Kratos explode as one of the series’ hallmark giant enemies comes in for the kill.

God of War (2018) – which I played through the opening two hours of last week – begins with Kratos using his new axe to cut down a tree. The tree is needed, we soon discover, for a funeral pyre, so that Kratos can cremate his deceased wife. He’s joined by his son, Atreus, who Kratos is soon teaching how to hunt. It’s a solid ten minutes before the first enemies (draugrs, which are a sort of Norse zombie) show up. By God of War standards, that’s an eternity of restraint. Even then, it’s not a huge spectacle. Enemies appear, and Kratos swiftly dispatches them. This new God of War seems content to take its time building up to things.

God of War is a father-son tale, a game about the two making a trek up a mountain to spread the ashes of their loved one. Kratos has become one of gaming’s many grizzled dads. His beard is flecked with grey, he struggles with showing affection, and he’s doing his best not to let Atreus see his dark side.

According to Aaron Kaufman, the community manager at developer Santa Monica Studio, "Kratos is definitely afraid that he’s passed on this disease of rage to his son". This is an entirely new avenue for God of War; now that Kratos is a single father, he needs to deal with the issues that drove the previous games. 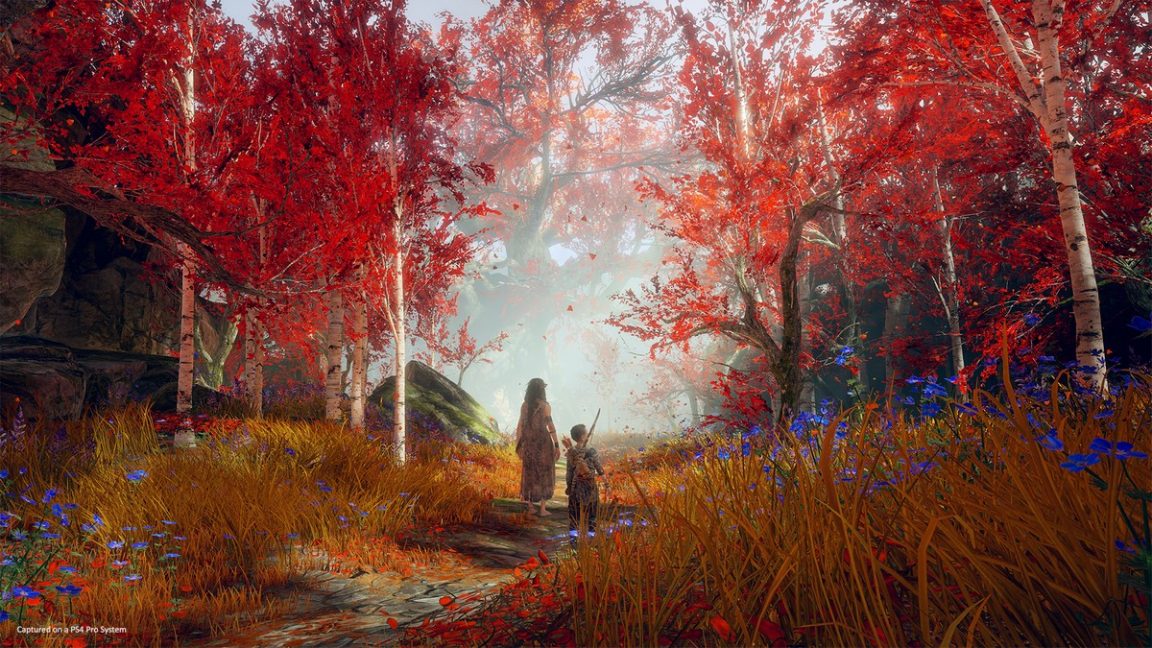 "Kratos lives with the sins of his past every single day," Kaufman says. "He’s internalised them. He’s been a distant father to Atreus... he was always off in the woods, testing his rage. In this game, in this story, you’ll see a man who is dealing with that."

The old God of War games were great fun, but going back to them now they feel like games that the world has moved on from. According to Kaufman, the preliminary research conducted in the game’s planning stages suggested that players were ready for a new direction. "Our data was telling us that God of War fans were getting tired of playing a one-note character. Vengeance was what the original games were about. We knew that to re-energise our community, the main thing they wanted to see was an evolved character and evolved gameplay."

Creative director Cory Barlog, who left the studio following God of War 2 but returned for this installment, knew from the beginning that Kratos becoming a father was the best way to take the series forward.

While the original God of War games followed the trials and tribulations of the Greek pantheon, Kratos now lives in the world of Norse mythology. Set camera angles are out in favour of giving the player camera control, quick time events are gone, and cutscenes are more likely to feature Kratos tentatively consider laying a comforting hand on his son’s back but not being able to do so than him, say, engaging in a weird, NSFW sex scene. Immediately, God of War feels very different from, and much less juvenile than, previous games in the series.

But once enemies start appearing – as they do in droves during these opening hours, in all different shapes and sizes – God of War feels simultaneously familiar and new. The combat system is slower now, similar in pace to last year’s Hellblade: Senua’s Sacrifice, especially in its emphasis on countering attacks with well-timed blocks. It’s got a much better, deeper system than that game had, though. Kratos’ repertoire of attack options expanded over the course of the demo, and a lengthy skill tree in the menu hinted at further abilities.

Kratos’ twin blades are gone, replaced instead by a giant ice axe that can be thrown at distant objects and then immediately recalled to you with a tap of triangle. Yes, it’s exactly like Thor’s hammer, and the metallic clunk and light rumble of the controller when it whips back into your hand is wonderful. Hurl the axe into an enemy and you’ll freeze them temporarily, letting you beat on enemies with your bare fists until you choose to recall it. Your fists are essentially your secondary weapon, and some enemies, like ice draugrs (the mythological beings that very clearly inspired Game of Thrones’ white walkers), are impervious to your axe and require a beatdown.

Your core abilities are your action game standard light attack / heavy attack / dodge / block, but some useful combos and extra moves emerged during my session. A light enemy can be juggled after a heavy attack, you can stun opponents with some attacks and then close in for a brutal attack, and during the demo I unlocked powered-up variations of my light and heavy attacks. The powered heavy, which requires holding down R2 (leaving you wide open, so timing is important), is particularly satisfying. Swinging the axe down hard into an enemy skull is distressingly enjoyable.

It sounds like Kratos will be using the axe for the whole game. "We’re not making a game about how many weapons you can have," Kaufman says. "We’re going for quality over quantity this time around. But I feel confident that players will feel like they have a new weapon every time they upgrade it." As with most action games, there’s also a meter that builds up and eventually lets you unleash more powerful attacks – here it’s your ‘rage’ meter, which dramatically increases your power as you rain down blows with your fists.

Witness the brand new God of War CG trailer, and stay tuned for a new look at the game tomorrow AM on https://t.co/6rfZPfginF. pic.twitter.com/iVjifIF0il

The first two hours of the game contains a surprisingly rich variety of enemies, including two giants, a handful of wailing revenants, different variations on the draugr, and even a few humans. There are a few boss fights scattered throughout these opening sections, but by far the best one happens about an hour in, against a character that – without spoiling the specific details – shows that God of War can do intense small-scale fights as well as it can do large-scale. This fight against an enemy Kratos’ size has the energy of a barroom brawl, except instead of throwing your opponent through a table or hitting them with a pool cue you’re dropping boulders on them and they’re hurling you off cliffs as the earth fissures beneath your collective might. It’s an extremely engaging introduction to the world, and situation, Kratos has found himself in.

This fight happens without Arteus present – when his son is nearby, Kratos needs to hold a few things back, because (according to Kaufman) he’s never told his son that he’s the God of War. "What did he want with us?," Arteus asks after one encounter, "we’re nobodies." In the game’s opening hours, Arteus emerges as an interesting, well-drawn character. He carries some of his father’s rage and anger, and must learn how to become a warrior to survive, but immediately you can see that he could go down a very different path from Kratos. During combat you can press square to have Arteus shoot arrows at your enemies, potentially stunning or injuring them. Kratos wants to toughen the boy, to desensitize him from the violence he’s going to encounter on their journey up the mountain, but you also see that Arteus is better at some things than his father is. His mother taught him to read runes in multiple different language, and he’s intuitive with animals and other people. He doesn’t revel in killing the way his father does. In a cutscene, the one and only friendly NPC I encountered marvelled at the boy’s intelligence. 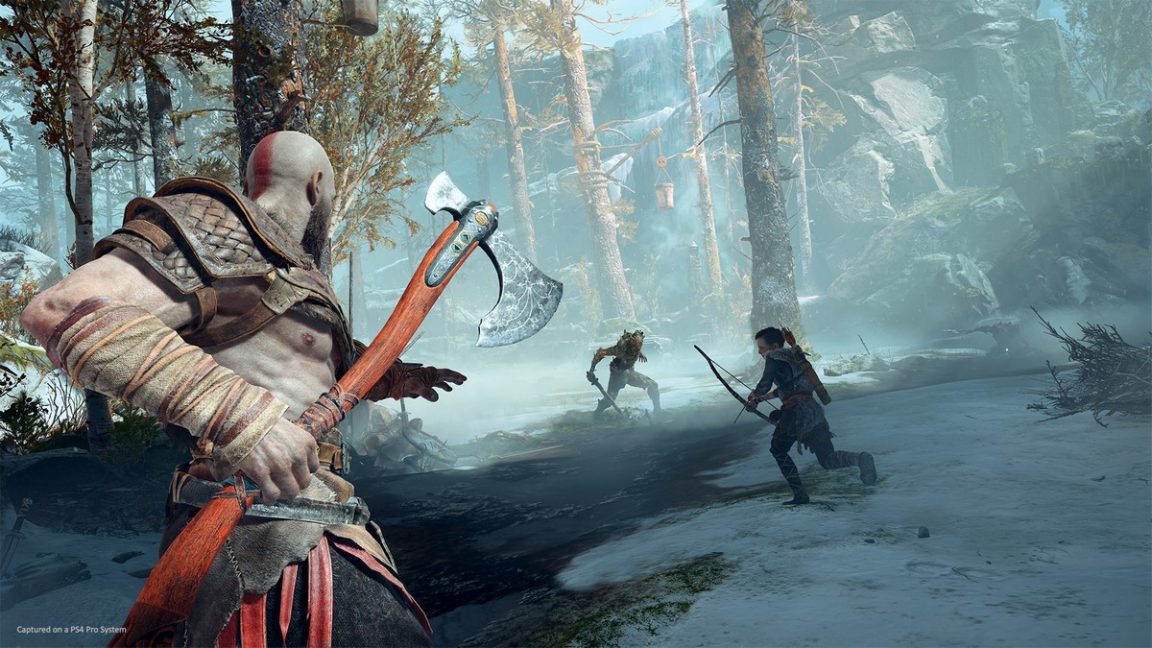 "In the game’s opening hours, Arteus emerges as an interesting, well-drawn character. He carries some of his father’s rage and anger, and must learn how to become a warrior to survive, but immediately you can see that he could go down a very different path from Kratos"

In a neat touch, the in-game bestiary, which updates as you encounter and fight enemies, is written in Arteus’ voice. This is one of a few ways the game seems to be guiding the player to see the world through the young boy’s eyes. Before one battle, Kratos advised his son that he was firing off arrows too fast, and that taking the time to ensure they hit, and that he had time to aim and make sure the shot was good, was more important than firing as many arrows as he could. When I died during the subsequent battle, I realised that this advice was really aimed at me. Not just because I was asking Arteus to fire too many arrows, but because I was trying to string together combos while leaving myself wide open to attacks from enemies who could break them. According to Kaufman, "you’ll see Arteus grow in his combat significantly over the game and become much much more capable" over the course of the game’s 25-35 hour run time, and the relationship between father and son will develop on-screen. "I think Kratos deeply cares about his humanity as the game progresses, more so than ever, and he honestly and truly has a love and compassion for his son, because he’s realising ‘I can’t let Atreus become who I was’."

According to Kaufman, exploration is a much more important part of this God of War than it was in previous titles. The series has typically pointed you in a direction and asked you to charge right at it, but this one gives you reason to linger in areas. God of War isn’t going open-world, but Santa Monica Studios is using the term ‘wide linear’ to describe the world. There are optional pathways with secrets down them all over the place. I picked up numerous collectable bits and bobs by wandering down these pathways, and there seem to be a lot of hidden collectables scattered around, although in the opening hours none of these pathways led to any exciting puzzles or interesting challenges. The game looks as gorgeous as you’d expect a huge first-party Sony title to look, as evidenced by all the screens and videos released thus far, so hunting through each environment should, at least, lead to lots of lovely sights alongside all the upgrades.

God of War feels, appropriately, like the result of the older games growing up, having a kid, and getting some of their shit together (but not all of it – Kratos would be a boring character if he didn’t have that anger problem). The opening hours might be less bombastic than past titles, but they’re more compelling. The combat is extremely enjoyable and the world is beautiful, but come April 20 I’m most excited about seeing what happens between Kratos and his son, and what they can learn from each other.

God of War is out April 20 on PS4. Hands-on impressions from a Sony event, with flight paid for by Sony's PR agency.