With our own planet currently trying to eject us from the premises, it’s easy to feel pretty down about being alive in general. And, to be fair to Earth, we do kind of deserve it. But, if mankind had a publicist, and if that publicist hadn’t already walked themselves off a cliff, they’d probably be urging us to play Sid Meier’s Civilization 6, or any Civilization for that matter. It gives the human race some much-needed good press.

The aim of Firaxis 2016 strategy game is to achieve peak civility by meeting one of five victory conditions: science, culture, domination, religion, or score. You do that by researching technologies, introducing policies, and turning your cities into ideal little utopias. It’s us, but on a really good day.

Every improvement is paired with a short quote from a wide range of relevant trailblazers, be it philosophy’s Aristotle, gravity’s Sir Issac Newton, or former funnyman John Cleese. These are the historical equivalent of a motivational pep talk, serving to remind you of humanity’s accomplishments and beckoning you down untold Wikipedia rabbit holes. 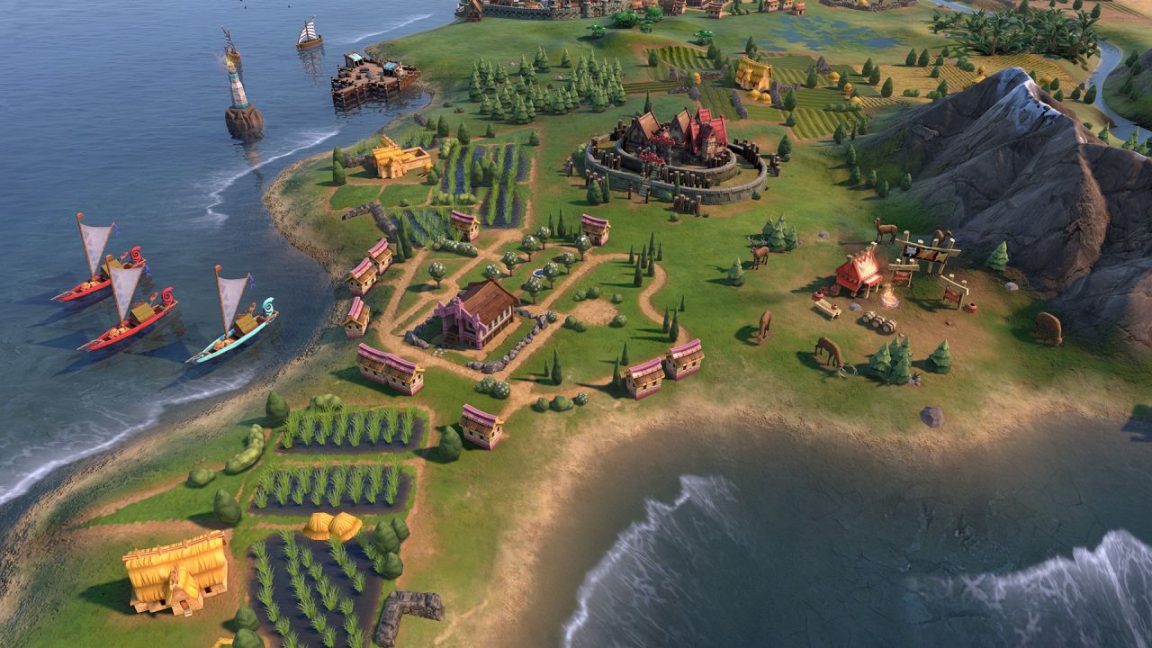 "You think there’s bad hygiene at games shows? 150 years ago, attendees had one custom-made outfit they never took off"

Take the concept of mass production, which dramatically ramped up the availability of everything from cars to canned goods. Prior to H&M churning out stylish yet affordable fleeces, the only way to get your hands on a woolen garment was by engaging with the local farmer, who was often armed. You think there’s bad hygiene at games shows? 150 years ago, attendees had one custom-made outfit they never took off. Now they have two. That’s progress.

Civilization 6 shines a light on some of the more underrated innovations, like stirrups. These dangling horse accessories were actually one of the most significant weapons in the history of warfare, stabilising riders in battle and spreading their influence far and wide.

The concept of replaceable parts is another vital venture that doesn’t get enough props. Before the 18th century, if a single component in a firearm broke, you chucked it away. So engineers made the bits interchangeable. Now when your washing machine leaks, you just swap out the faulty pipe instead of burying the whole thing in the garden. Well done again, humans.

And don’t get me started on sanitation, another must-have Civ tech. Up until 1865, London lacked a sewerage system. Waste got dumped right in the Thames. In the balmy summer of 1858, this caused an event called The Great Stink, leading to an outbreak of cholera. People didn’t blame it on germs, but miasma, or ‘bad air’ (some 19th-century academics actually thought inhaling food smells could make you obese).

Once germ theory gained traction in the 1860s, we had pioneers like Joseph Lister introducing the radical practice of washing your hands before performing invasive surgery, and Louis Pasteur saving France's entire silk industry by screening silkworm eggs for infection. All this from sanitation, one branch among many on the tech tree of humanity.

In Civilization 6’s streamlining of mankind’s chaotic trajectory, you can see how inventors passed the baton. First comes sailing, then, after a few hundred years of boats getting lost at sea, comes celestial navigation. Similarly, you can’t develop a healthy relationship to the printing press without previously striking up a rapport with machinery, engineering, and the wheel. Truly, we are standing on the shoulders of giants - it’s good to remember that when you’re next browsing Netflix until you get a headache.

As with many great works, let’s not overlook the involvement of British actor Sean Bean, who fondly reads out all milestone text. Research astrology and he’ll quote sci-fi writer Arthur C. Clarke: “I don’t believe in astrology; I’m a Sagittarius and we’re skeptical.” There’s reflection in Bean’s voice, like a sentimental grandad flicking through a photo album. Remember that time you discovered the moon? Haha, those were the days.

Civilization 6 does explore other frameworks developed by those fascinating and complicated people we call... people. Policy-wise I tend to favour a strong autocracy because I’m a bit of a control freak. But it’s the technological advances that really give me hope as a human, offering concrete evidence of our ingenuity (concrete being another example). I love scrolling back through my unlock order and seeing how far I’ve progressed. Bustling markets, animal husbandry, siege tactics, banking, trading, writing, ballistics - all that from a single group of settlers who couldn’t even tie their own shoe laces. Because shoe laces hadn’t been invented yet.

Right now in the real world, the self-esteem of our collective consciousness is taking a battering. It’s not just the indignity of having to cower from trillions of invisible disease demons lurking outside, but the horror of those small rectangles we peer into every 30 seconds steadily revealing an endless carousel of our worst natures. Like arguing over toilet roll, and hoarding toilet roll, and other things that don’t even involve toilet roll. Who knew doing nothing all day could be this mentally exhausting?

Civilization 6 is a great reminder of what it took to get here, and just how much better we are than crabs, who literally just sit there the entire game doing nothing. So if you’re feeling particularly distressed by sentience, give it a go, preferably before the systems that run our lives collapse entirely and we descend into anarchy.