So that's why we never get to see a full-on view of Geralt.

Apparently, Geralt is a never-nude in The Witcher 3 because rating boards frown upon it - not because he's afraid or ashamed to run around in the nip.

According to CD Projekt Red, speaking with Gamestar, the ratings board in Germany frowns upon players being able to control a naked player in the game. But it's not just Germany, as there are restrictions in place with rating boards in other countries as well. So, it was probably easier to conform with one region's rules instead of developing extra bits for regions where it might be considered acceptable.

That's why you always see Geralt in saggy, dingy boxers instead of partially or fully nude. You do get the one-off when he hops on the unicorn with Yennefer, but that's it. And of course, there is never a shot of his, um, well you know, shown. Which could be a good thing, depending on which camp you're in. 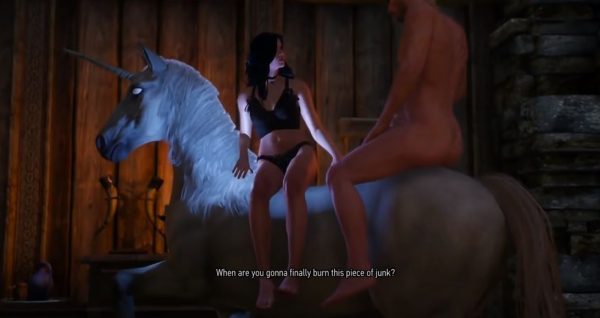 However, it is okay for NPCs to run around in their birthday suits because you don't physically control them.

In Germany, controlling a naked character is considered detrimental, or in the USK's own words "development-impairing" and possibly even "youth-endangering." This is despite The Witcher being a mature-rated series, meaning underage folks shouldn't be playing it to begin with.

While a full-on naked Geralt not being available may be disappointing for some Witcher players, at least we have bathtub Geralt to lust over. Imagination is sometimes better than the full monty anyway.