As you start your journey in the world of Genshin Impact, an early quest will send you on the hunt for Secret Pirate Treasure! To solve the mystery of the ancient Arcadian ruins, you’ll need to use your knowledge of Mondstadt and surround areas to sniff out the hidden booty.

To begin the quest - which is the first available to you in your quest menu once you’ve completed the first prologue - make your way to the Knights of Favonius headquarters and speak to your party-mate, Kaeya. 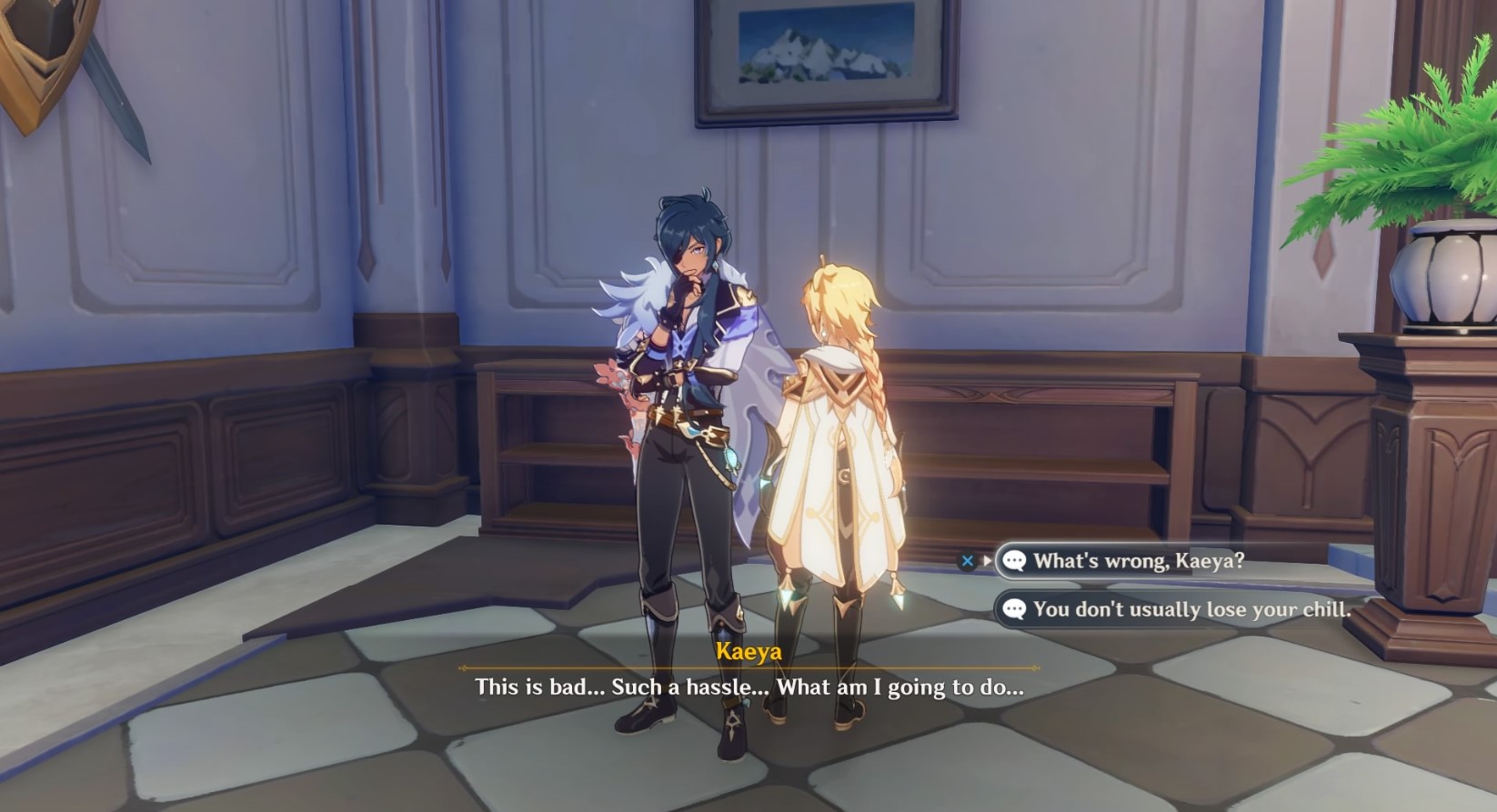 He’ll allude to an important mission you need to undertake, but it’s too dangerous to speak inside. After the conversation, head back out into Mondstadt and talk to Kaeya in the courtyard garden outside.

Approach Kaeya in the garden outside and you’ll initiate a cutscene automatically. 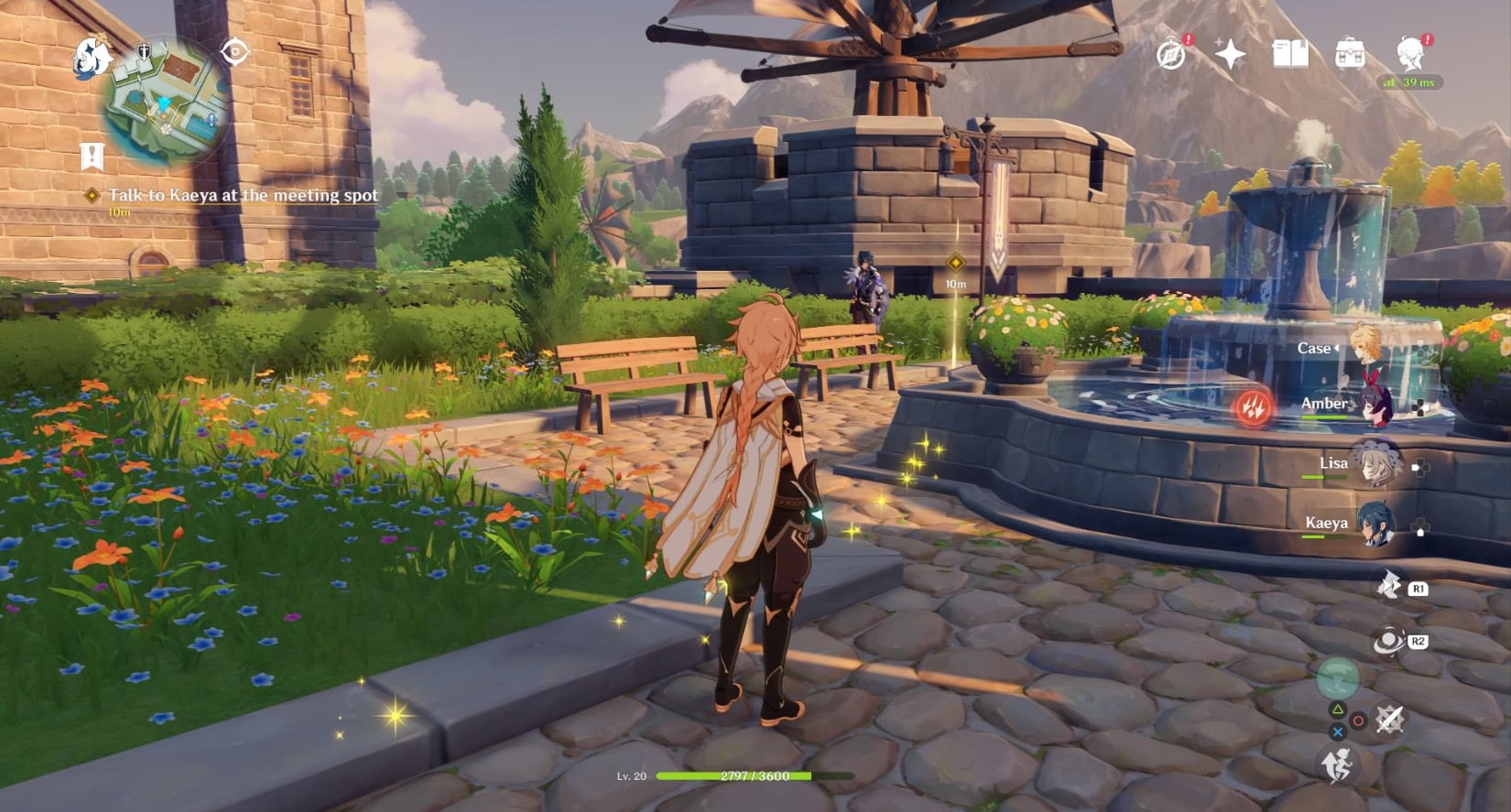 He’ll clue you in to the existence of a hidden family treasure, kept secret in a mysterious location to save it from the clutches of greedy pirates.

Your objective is to see what information you can drum up about the treasure - but keep things hush-hush.

Run back over to the Knights of Favonius headquarters and speak to the two members outside the building about the treasure.

They’ll leave you none the wiser, so return to Kaeya for a change of tack. 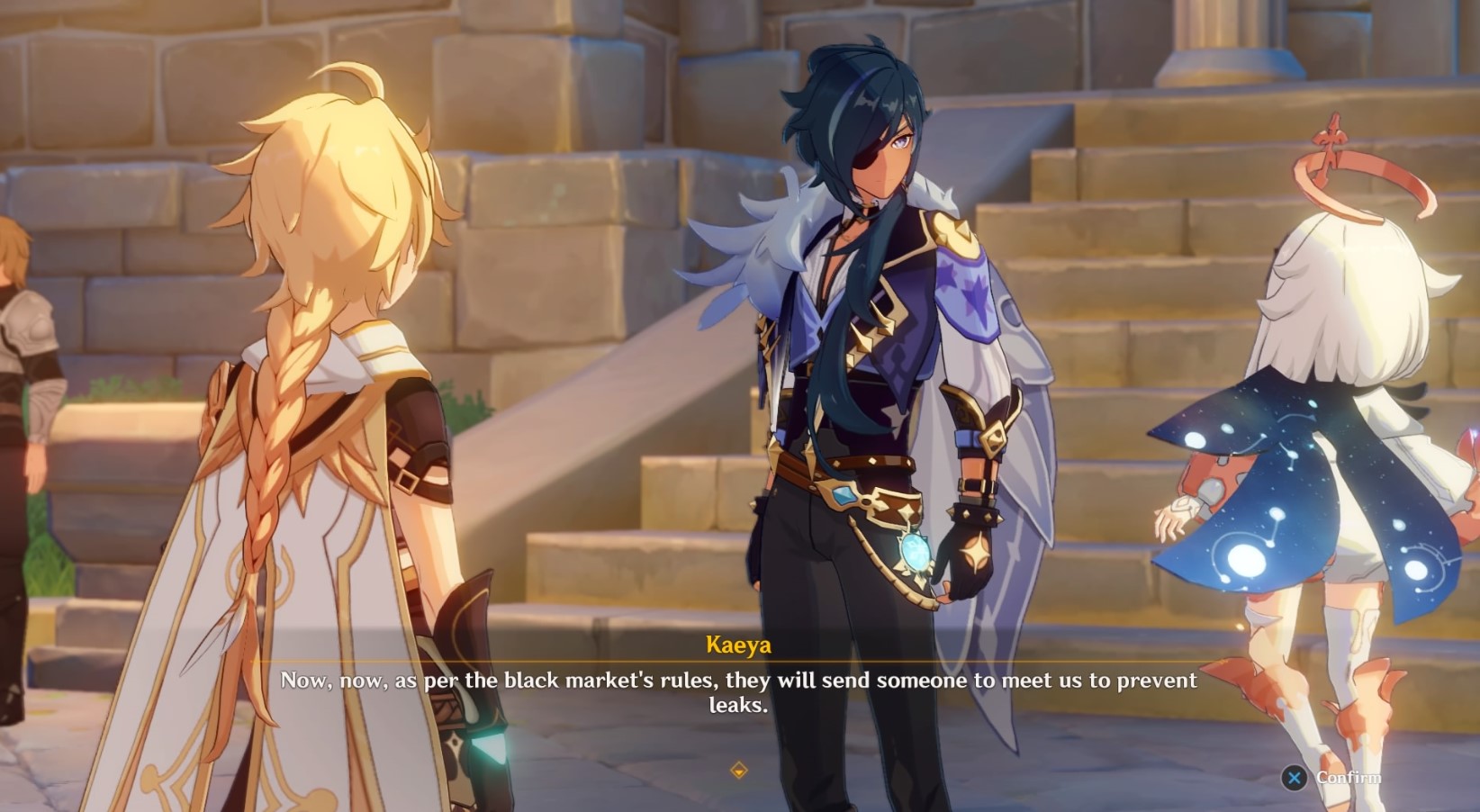 He has a black market lead that promises to lead to the buried chest, so once you’ve spoken to him, agree to meet the source just outside Mondstadt in the Whispering Woods. 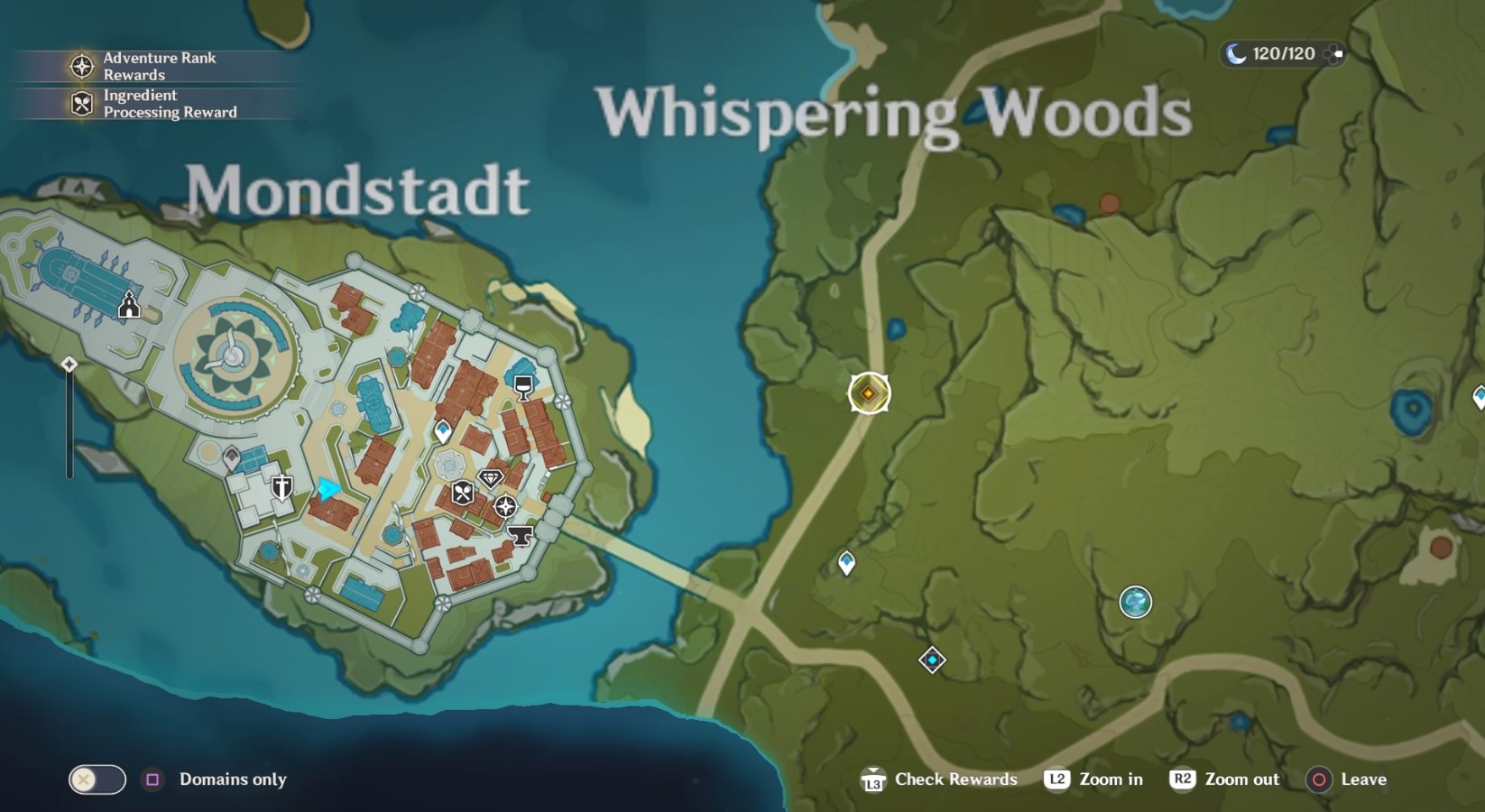 When you arrive, the informant, Vile, will be fleeing a group of rowdy Hillichurls. Defeat them and grab your first piece of the puzzle.

Solve the mystery - Three six-armed giants reside in the city in the lake. Two guard the statue, one the treasure

Vile thanks you for saving her life with a free hint towards the treasure’s location - “Three six-armed giants reside in the city in the lake. Two guard the statue, one the treasure” - as well as a cryptic map. 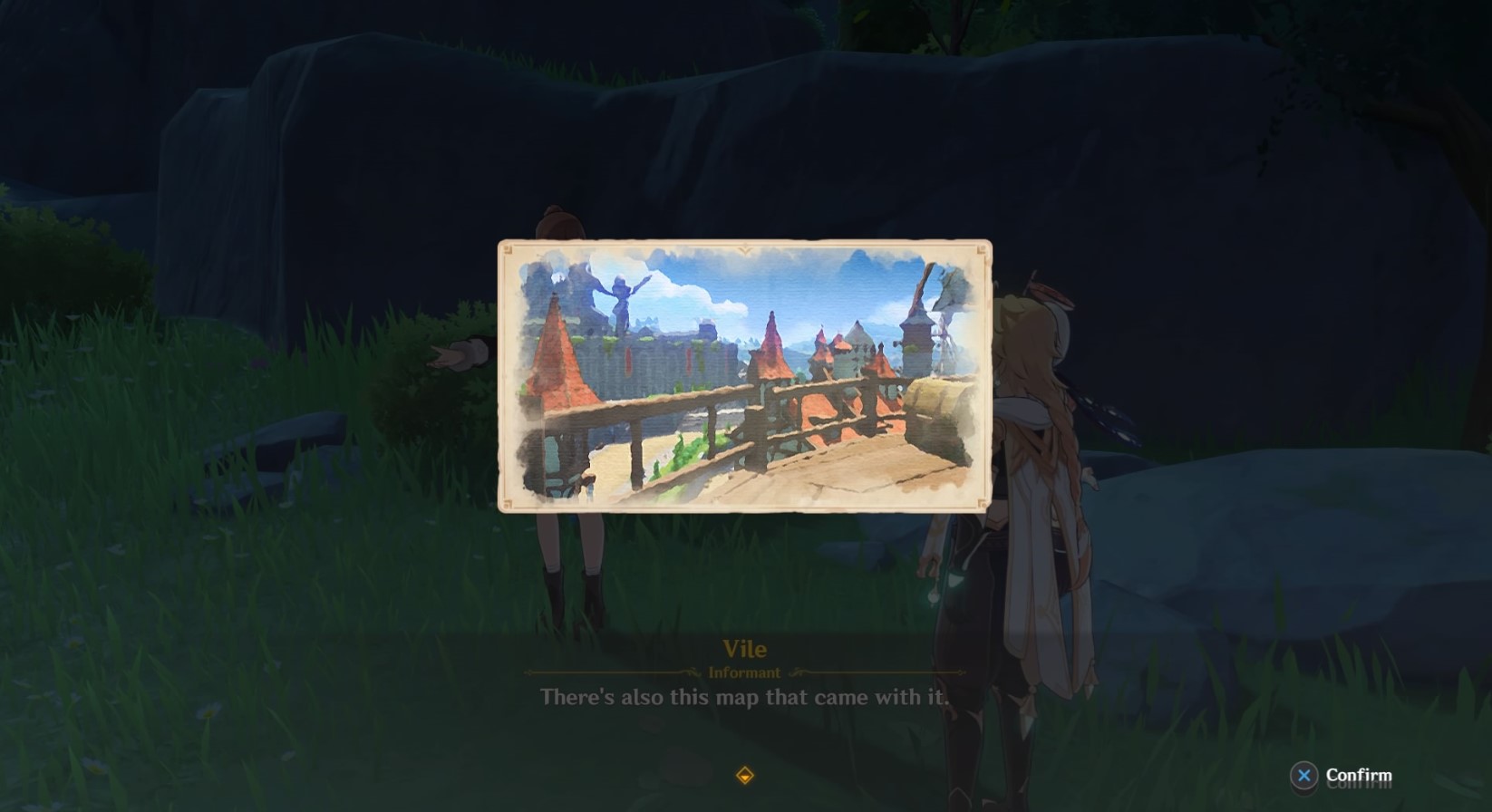 We can extrapolate that the city in the lake is Mondstadt.

And in the visual clue, we can see the goddess statue at the far northwestern corner of the city.

Look at the city’s skyline and see if anything “six-armed” stands out to you.

Climb up the windmill that’s on the southern side of the statue and you’ll find a common chest. 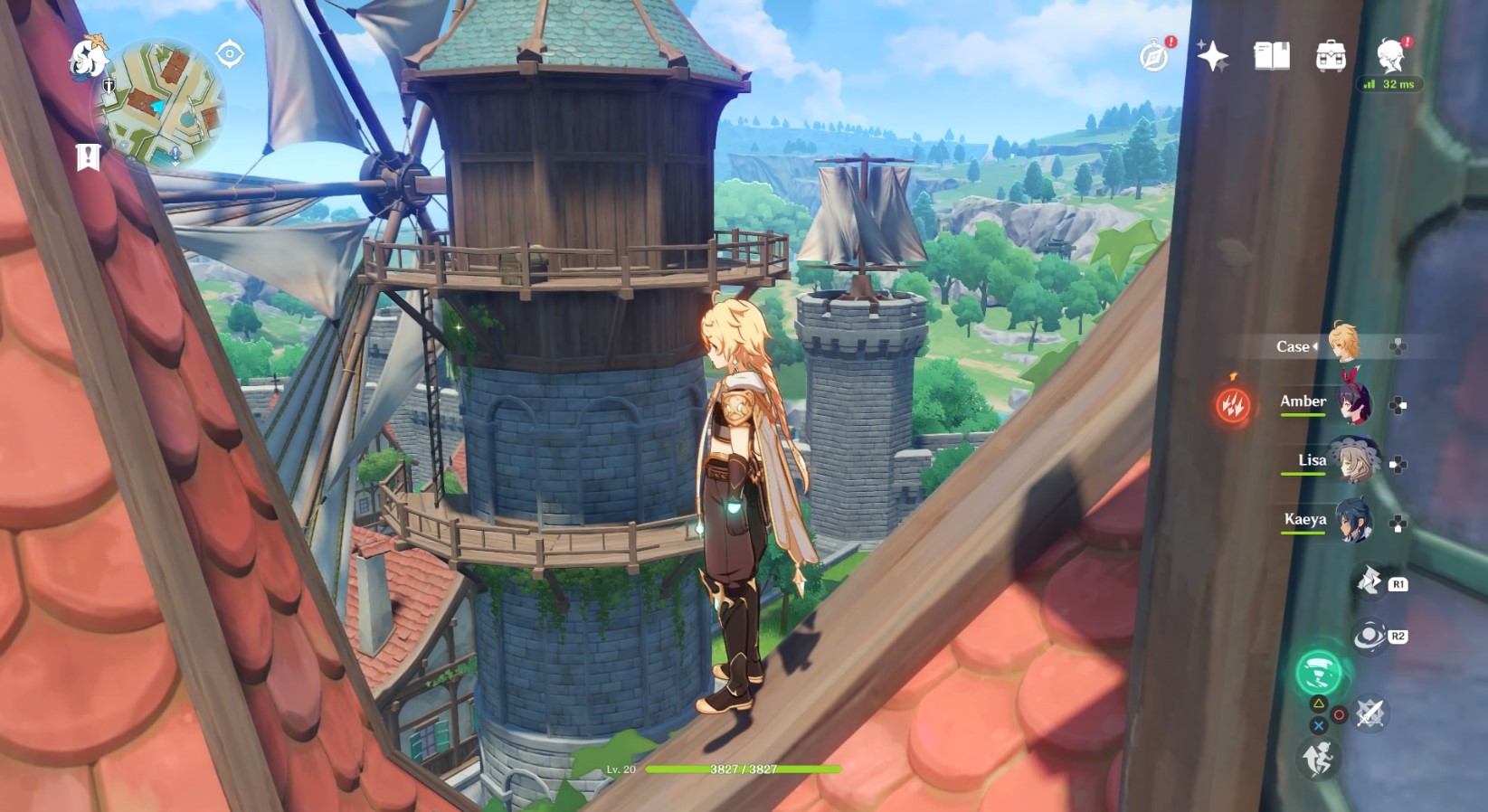 Open it to find your next esoteric clue. 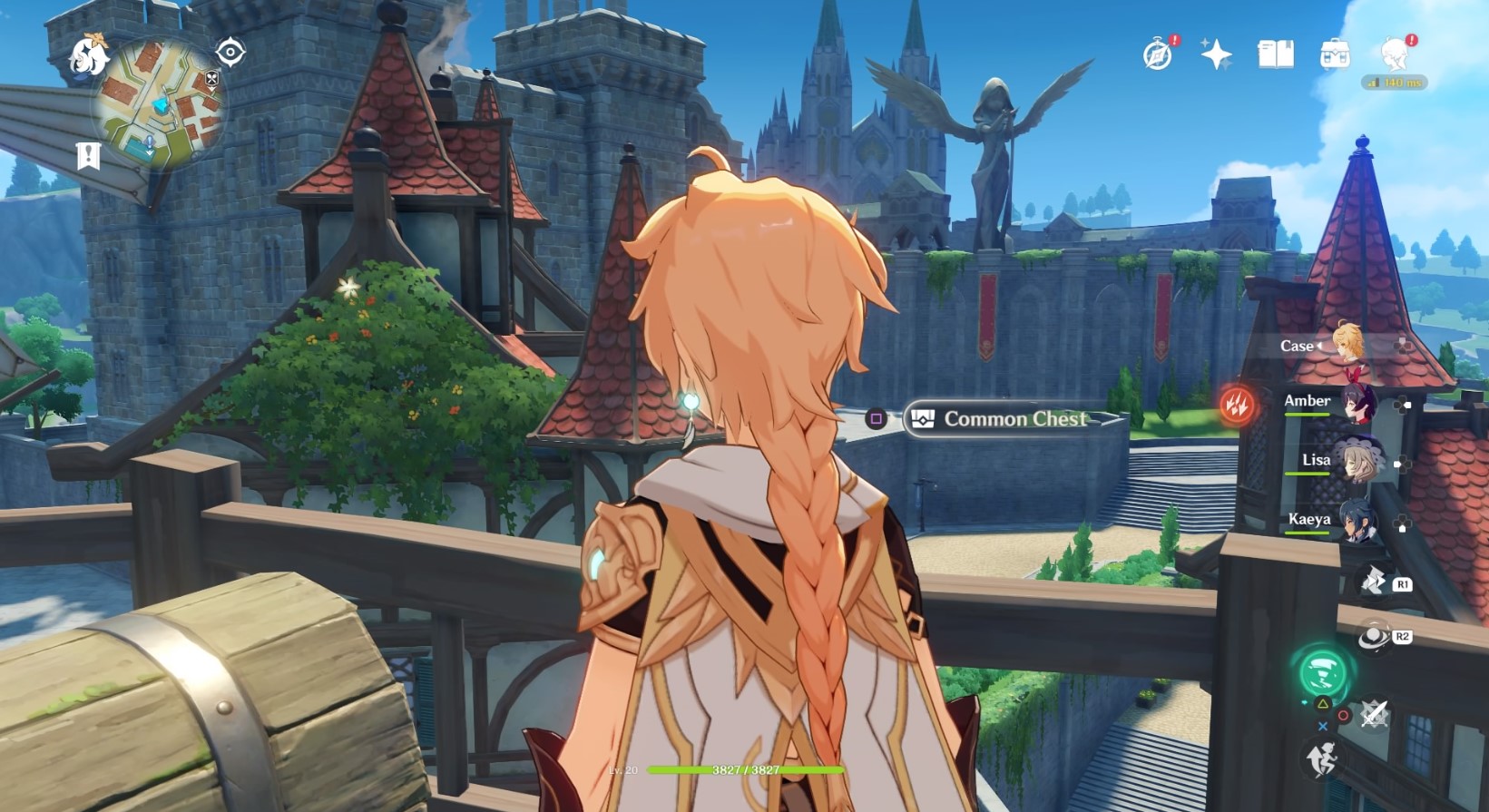 Solve the mystery - She doesn’t love him at all. The passion rushing through the clear spring is just a front. When she’s cold and alone, her true heart is revealed.

This second clue is a little more difficult, because you might not have been to the area it refers to yet. 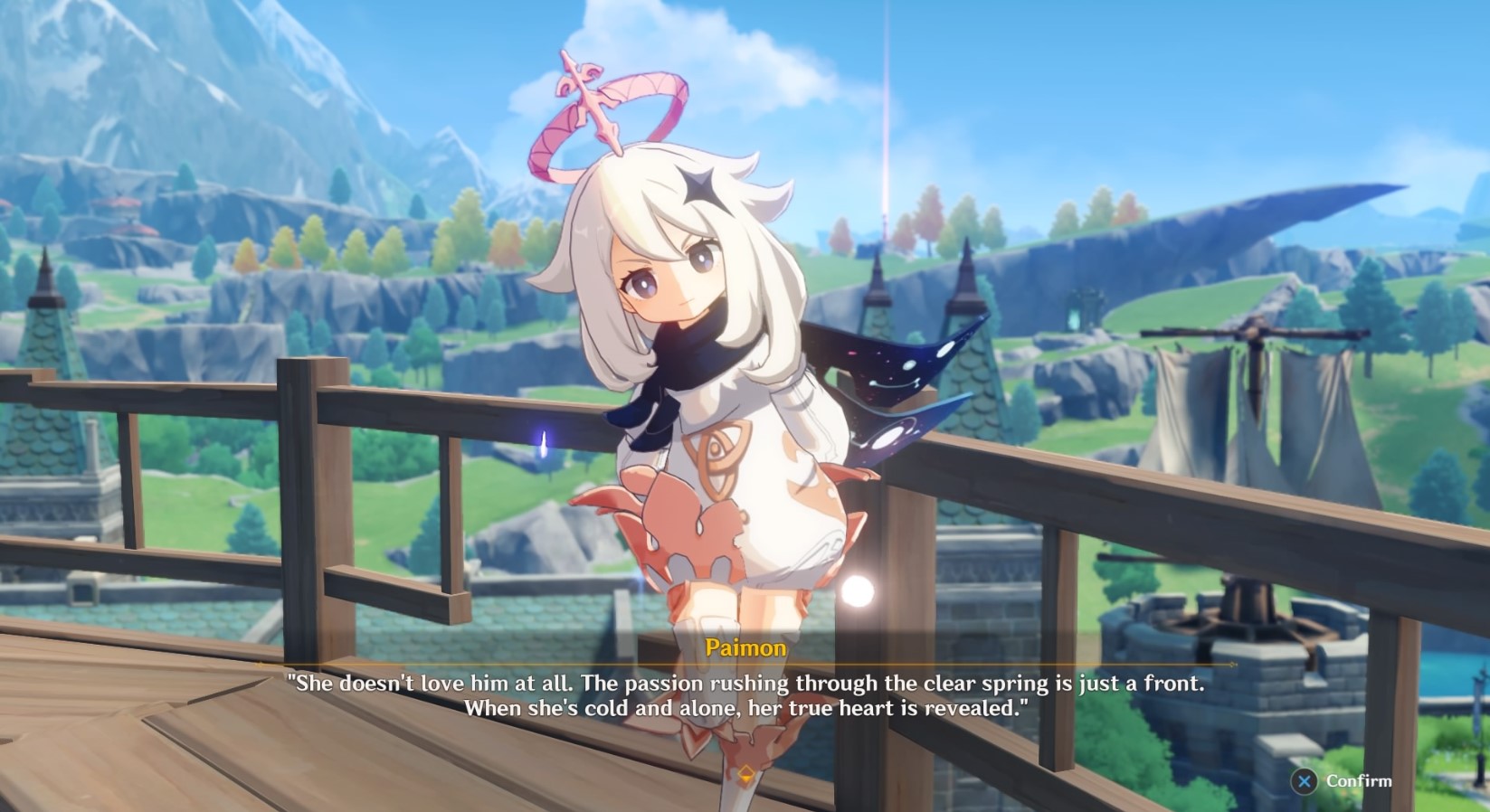 The clue, “She doesn’t love him at all. The passion rushing through the clear spring is just a front. When she’s cold and alone, her true heart is revealed,” refers to a lake to the south of Mondstadt, in the Springvale region.

You’ll likely have to journey to the nearby Statue of the Seven to unlock that portion of the map. 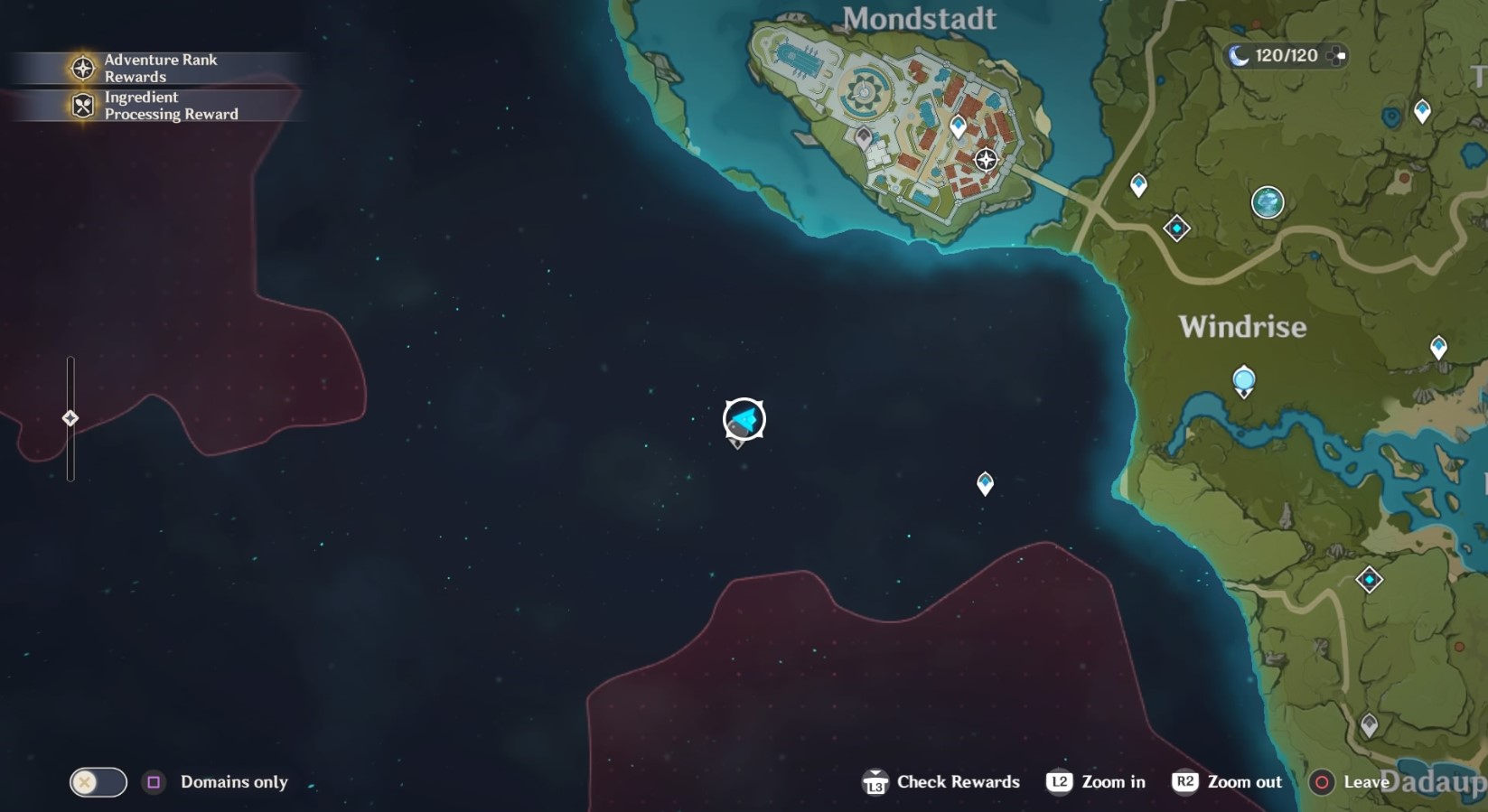 Make your way to the spring and you’ll see a waterfall on the southern side. 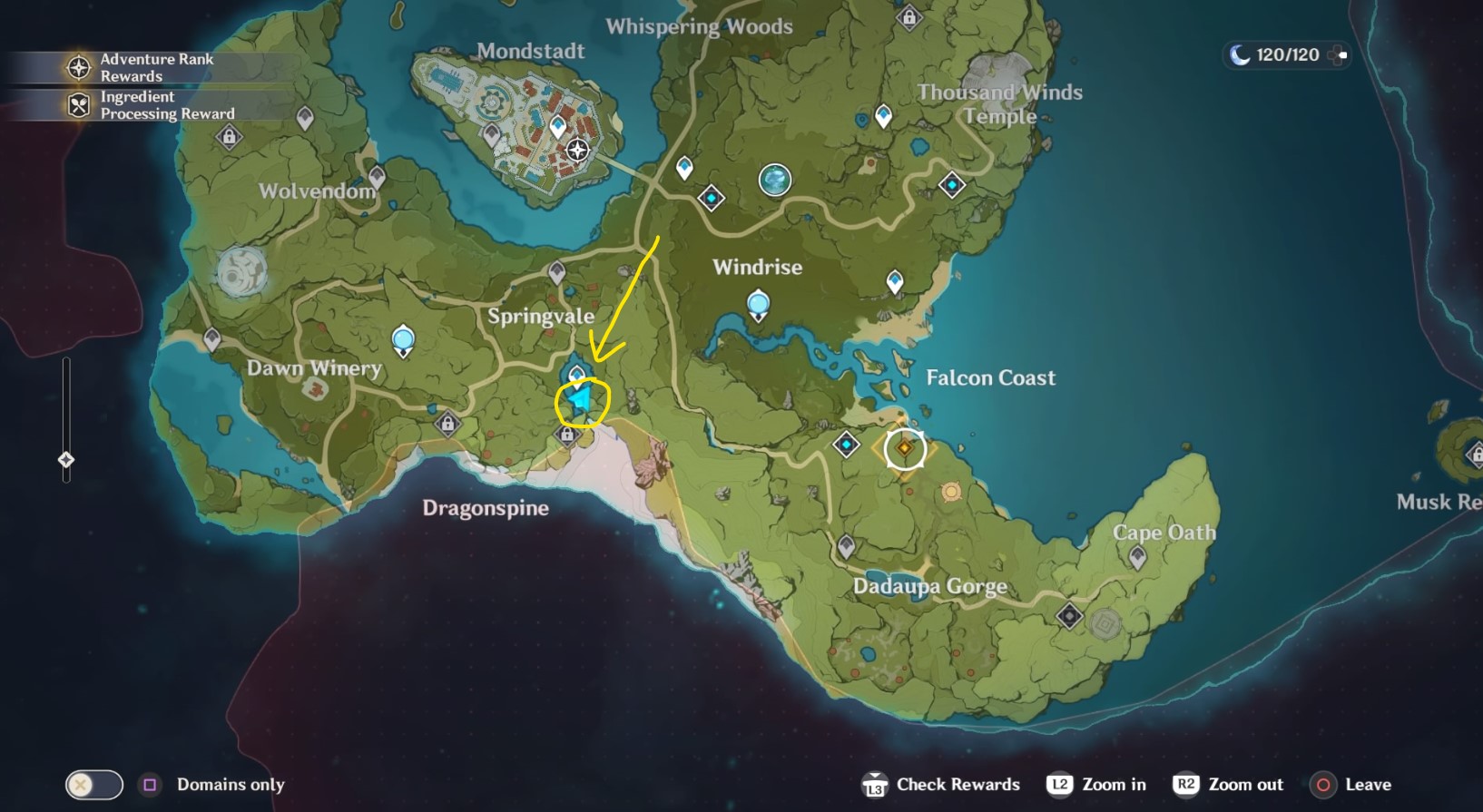 Climb all the way to the top of the cliff, and next to the waterfall you’ll see three short poles with icicle symbols on them. Hit these with a cryo elemental attack - like Kaeya uses - and another chest will appear! 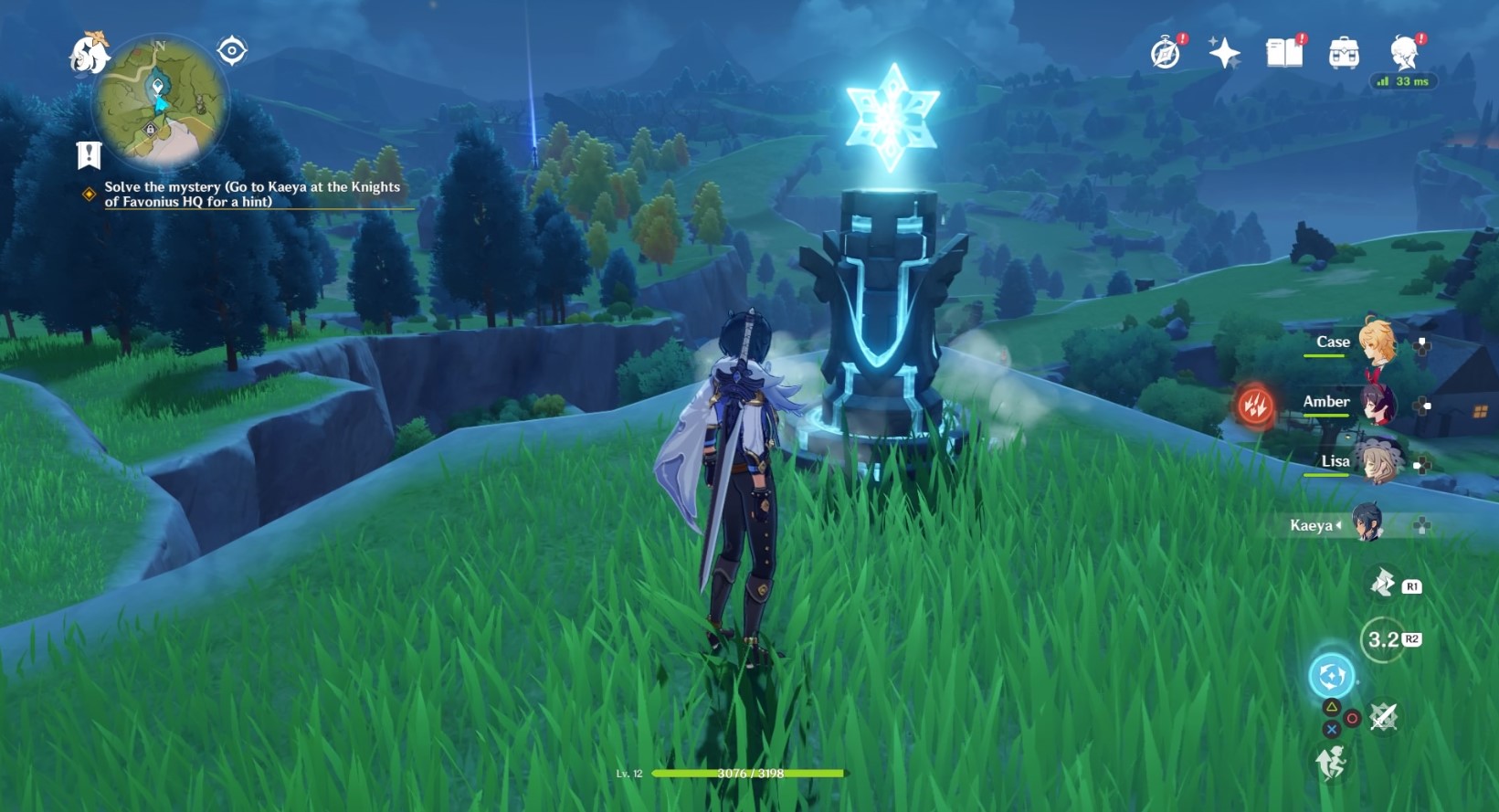 Opening this chest reveals the final map, where X marks the spot.

Your destination is just south of the archipelago that’s southeast of Mondstadt, in the Falcon Coast region. 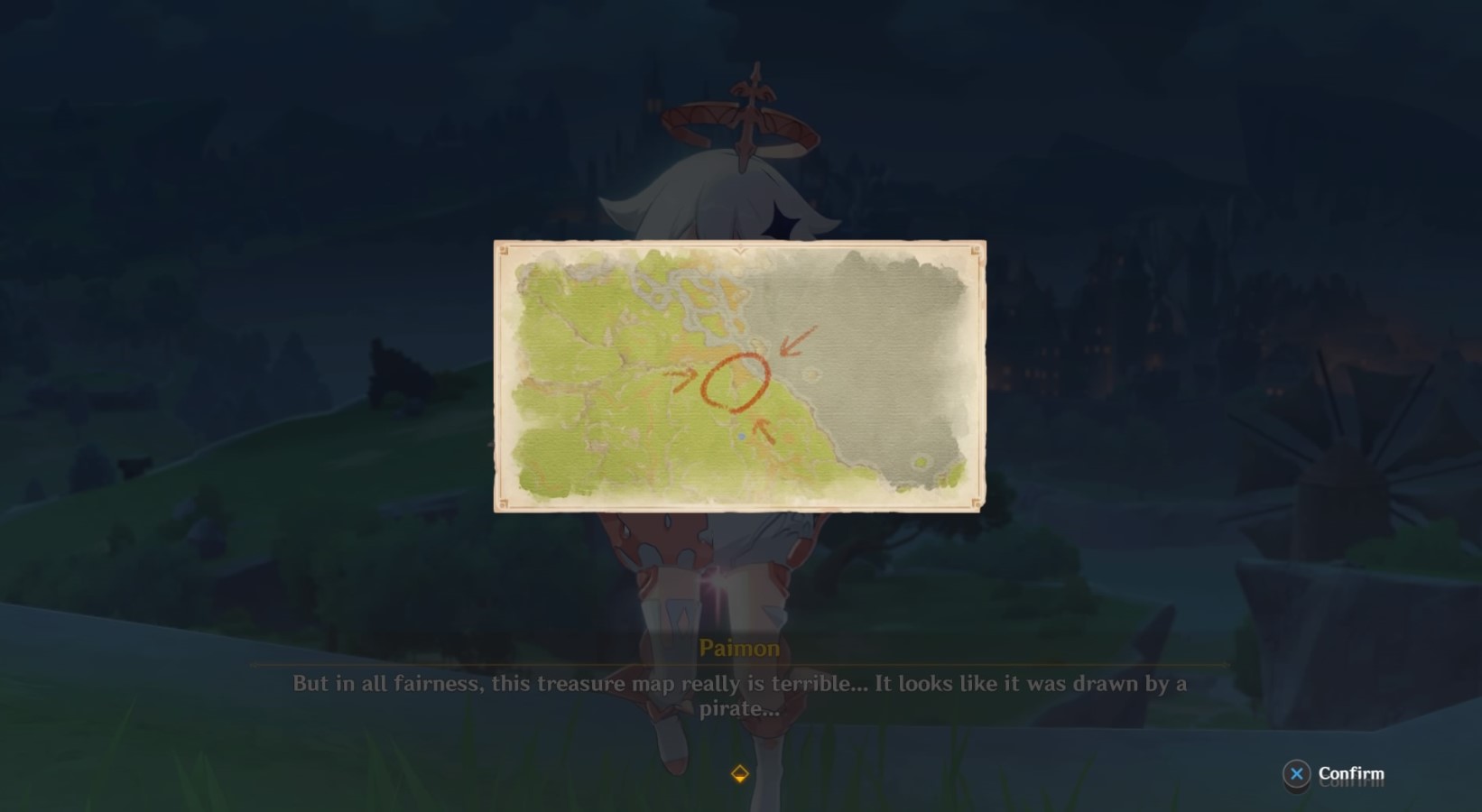 At the map marker, you’ll find the entrance to a cave. 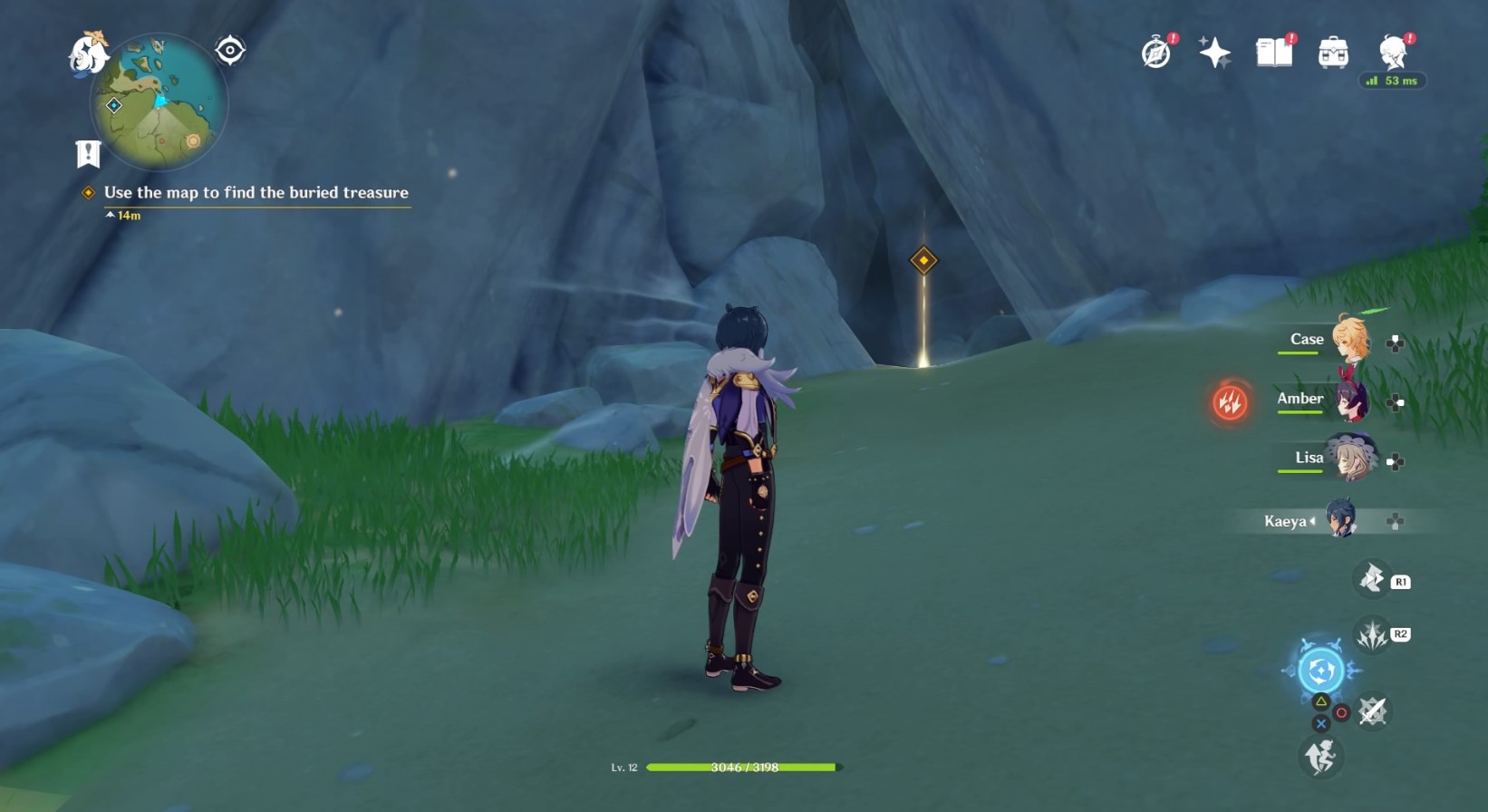 Head inside and you’ll come across Hillichurls and flame traps. Use Kaeya’s cryo element attacks to turn off the flame traps for a limited time. 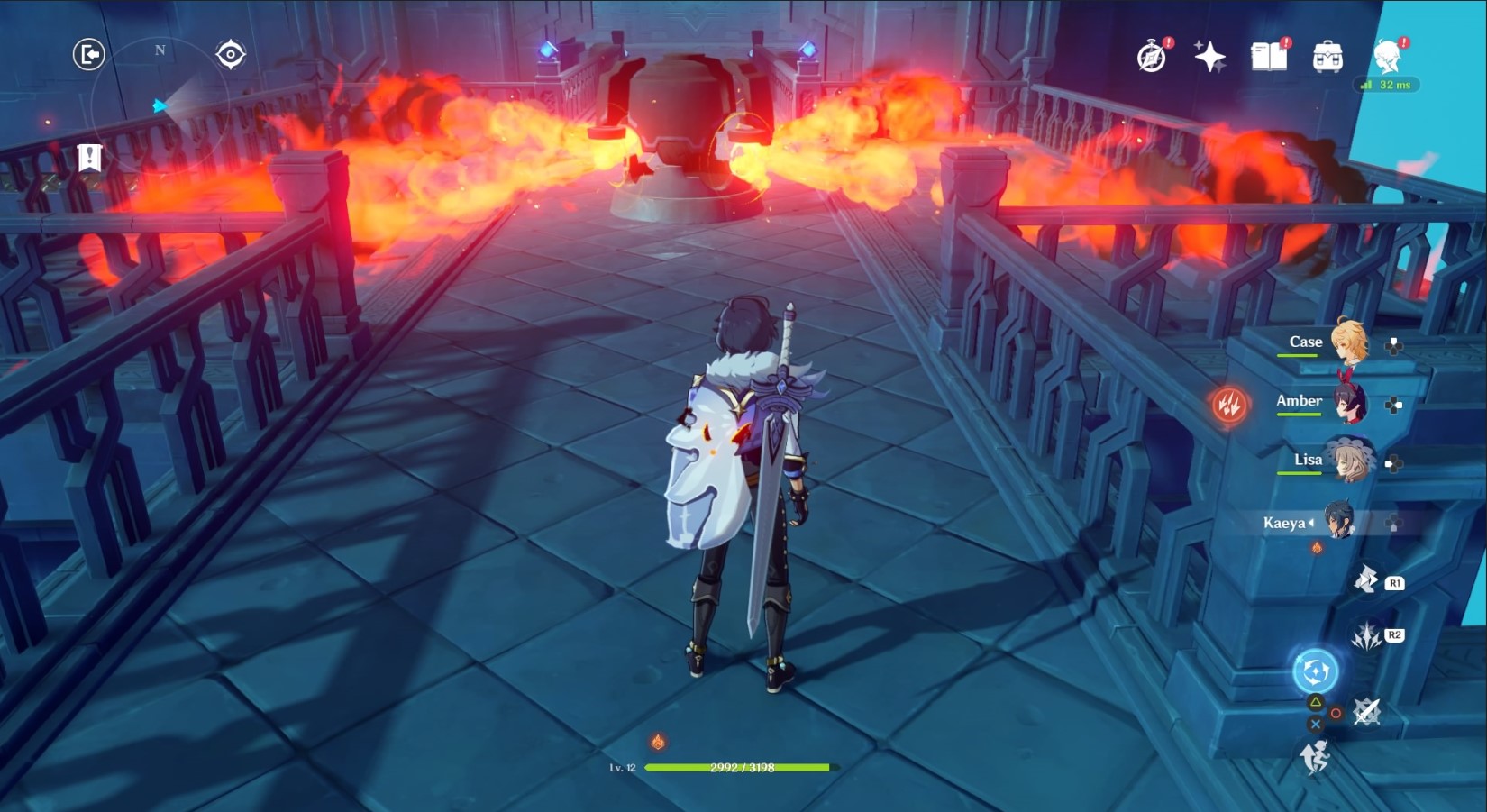 In the first large chamber, interact with the mechanism and defeat the jelly enemies within the time limit. Try using wide-ranging AoE attacks like Lisa’s elemental burst and Kaeya’s special. 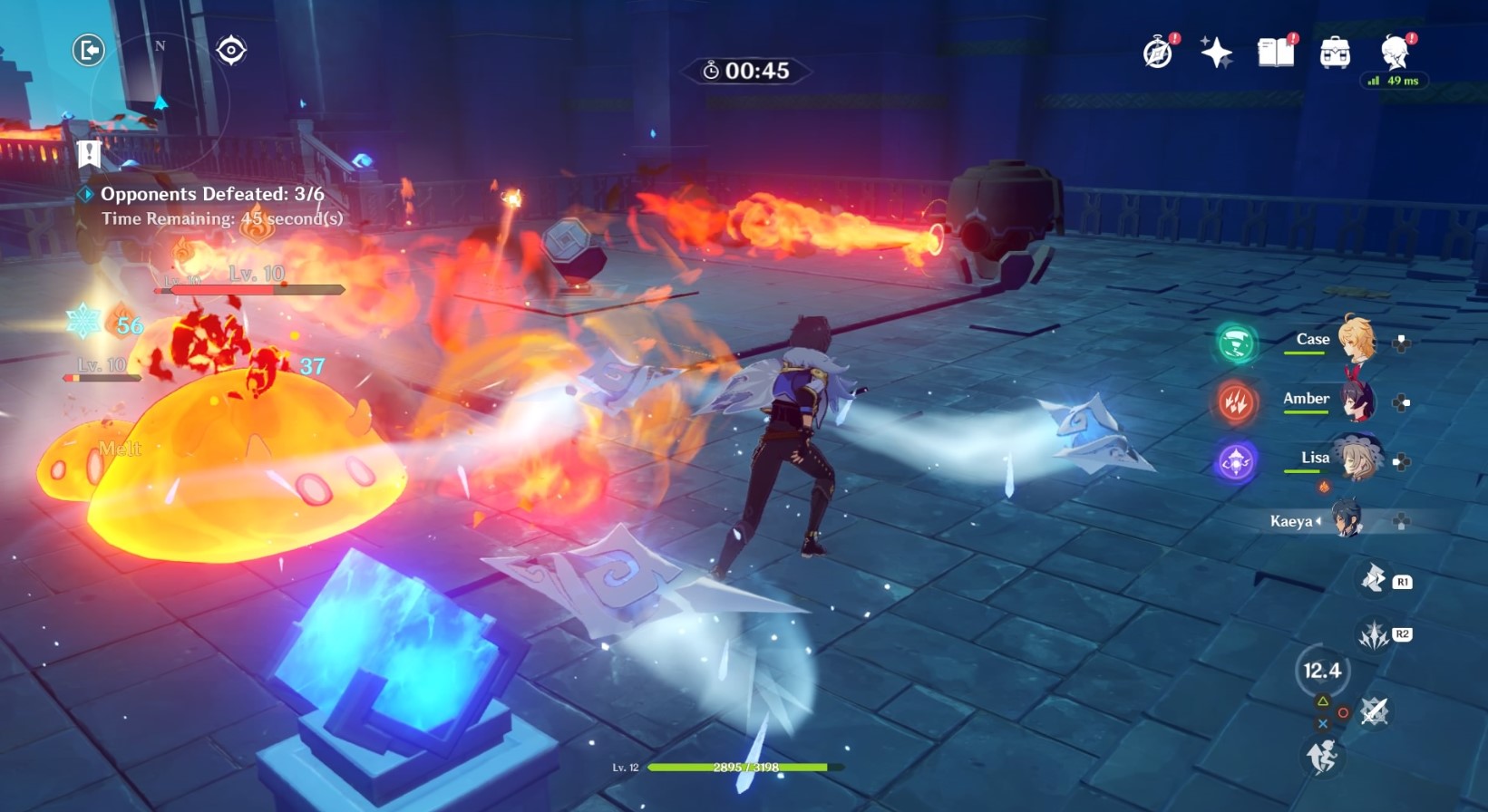 In the second room, the quest’s story advances and you’ll have to fight the main boss: a Ruin Guard.

Defeating a Ruin Guard is one of the challenges in your Adventurer’s Handbook, so you’re in luck. 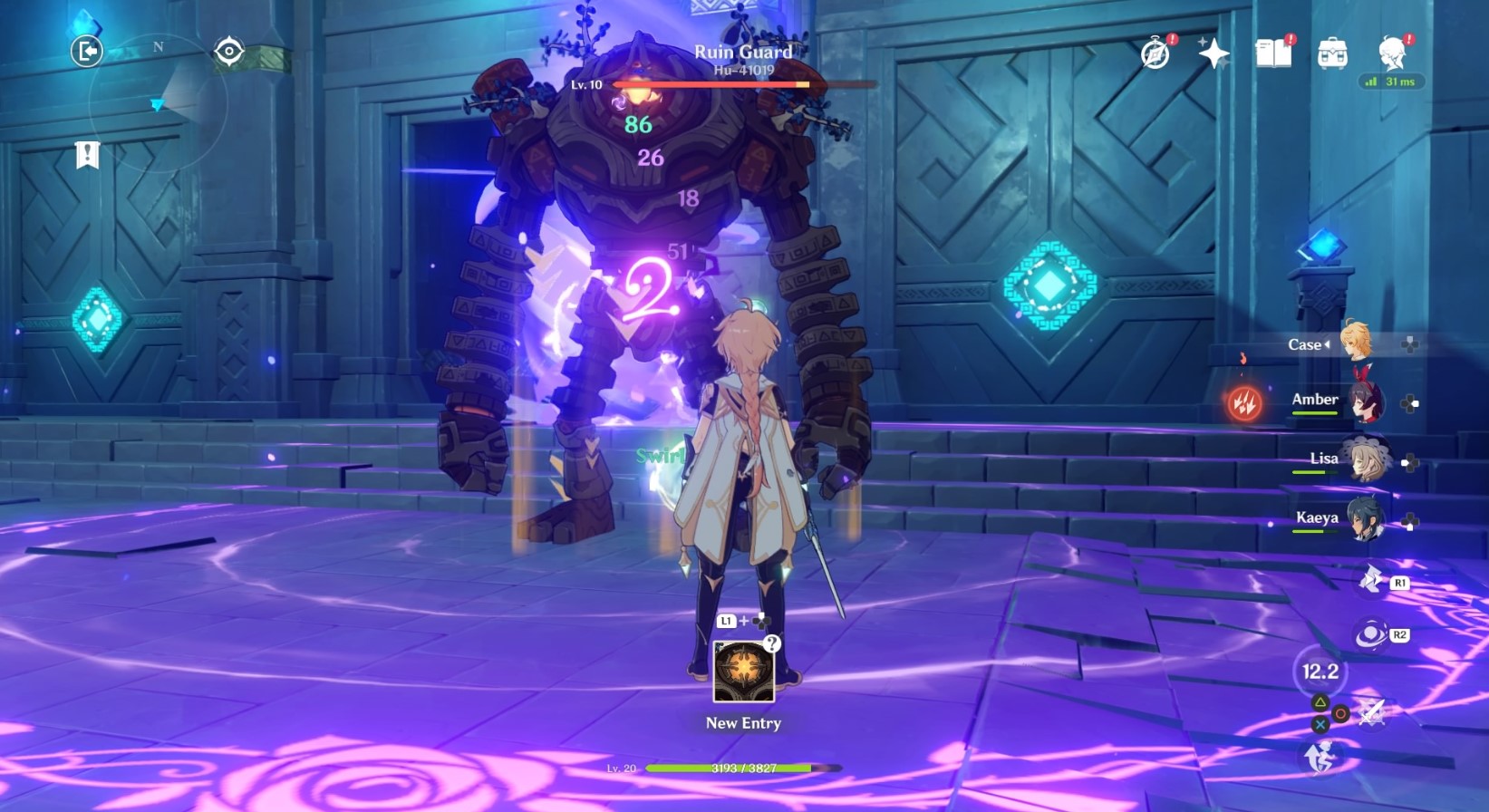 Utilise the different elemental attacks of your party to inflict statuses on the Ruin Guard, then use a ranged character like Amber to target the glowing core weak spot for extra damage.

Once the Ruin Guard boss is defeated, the quest concludes and the treasure is yours!

For more information on Genshin Impact, check out our FAQ including how to play with friends, and fixes for common bugs.

Or if you're trying to complete your Adventurer's Handbook - here's how to process ingredients while you're cooking.