Remember in 2012 when the industry’s biggest bugbear was trading in single-player games?

Back then the emphasis was on trying to penalise players who bought second-hand with online passes, but now - even though we’re less likely to have a physical copy than ever - it feels like blockbuster franchises are actually trying to keep you positively invested past the runtime of the main story.

Gears 5’s Horde mode takes the simple survival premise and layers a constantly changing metagame of skills, powers, characters, and abilities on top. Microsoft is hoping that this extra effort to keep things fresh, in addition to the competitive multiplayer, will give Gears 5 a longer shelf life than other games in the series.

At its core, Horde Mode in Gears 5 is similar to last time. You face 50 ever-increasing waves of enemies, collect power and weapons, build fortifications, and smash your way to victory. What’s different is the new emphasis on skill cards and upgradable perks that buff your character and alter your playstyle as you squish more and more baddies into goo.

More skill cards are unlocked progressively as you play and level up a character. Each one has 14 cards to unlock and you choose five to add to a character’s loadout before you jump into a match.

In-game, you can also improve a set of perks between rounds by using power to get greater benefits. These powerful buffs to things like weapon damage, cooldowns, and the duration of abilities - as you’d expect - make a big difference as you reach the harder tiers.

Combined with characters’ natural abilities, there’s a big incentive to create synergies that suit your team. You might give a sharpshooting character a skill card which regens ammo for the team with each headshot, thereby keeping your front-line attackers stocked without needing to scavenge under pressure.

You still need to maximise your territory control to generate the most power, but you’re not quite as focused on building things with the Forge in Gears 5, these personal power-ups are supposed to be just as important, so you’ll need to make more tactical choices as rounds progress.

As for the characters themselves, The Coalition has spent some time obviously trying to create a more diverse roster to choose from. You pick five characters to fill out a squad, with any missing players replaced by AI Red Shirts. The most interesting addition to the core set is Jack, the floating robot who’s being billed as a support character that's good for new or more casual players. 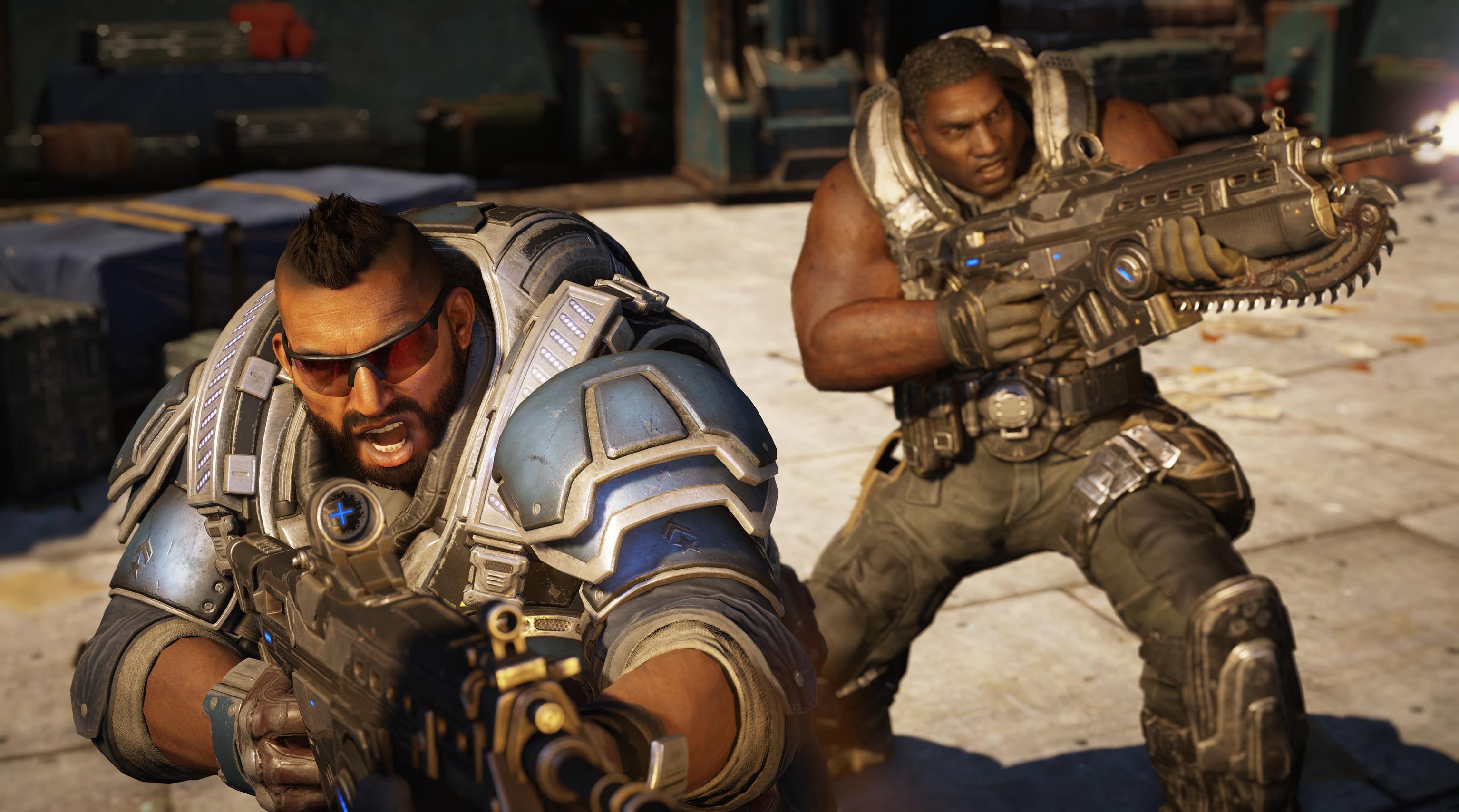 While he has conventional weapons by way of a shock beam that fries swarm-corrupted mechs and locusts to a crisp, he can also heal friendlies and take control of enemies - even some big ones - for extra firepower; like you can implant yourself into a Pouncer to jump around the map or fire deadly quills back at The Swarm.

He also floats over the top of small obstacles and such, so he has a definitively different feel to the other characters.

Another big part of the novelty with Gears 5’s Horde mode are the guest characters unlocked via extra character packs: Emile-A239 and Kat-B320 from Halo:Reach, and the new version of Sarah Connor from Terminator Dark Fate.

The roster is split into five classes:

Every character has their unique ultimate abilities on top of their basic class ones, which for the guests include fun nods to their home franchises. Sarah Connor’s ult gives her T2-style shotgun massive knockback power, which is great for crowd control, while the Reach characters have classic items from Halo multiplayer - Emile has the Drop Shield and Kat the Hologram Decoy. 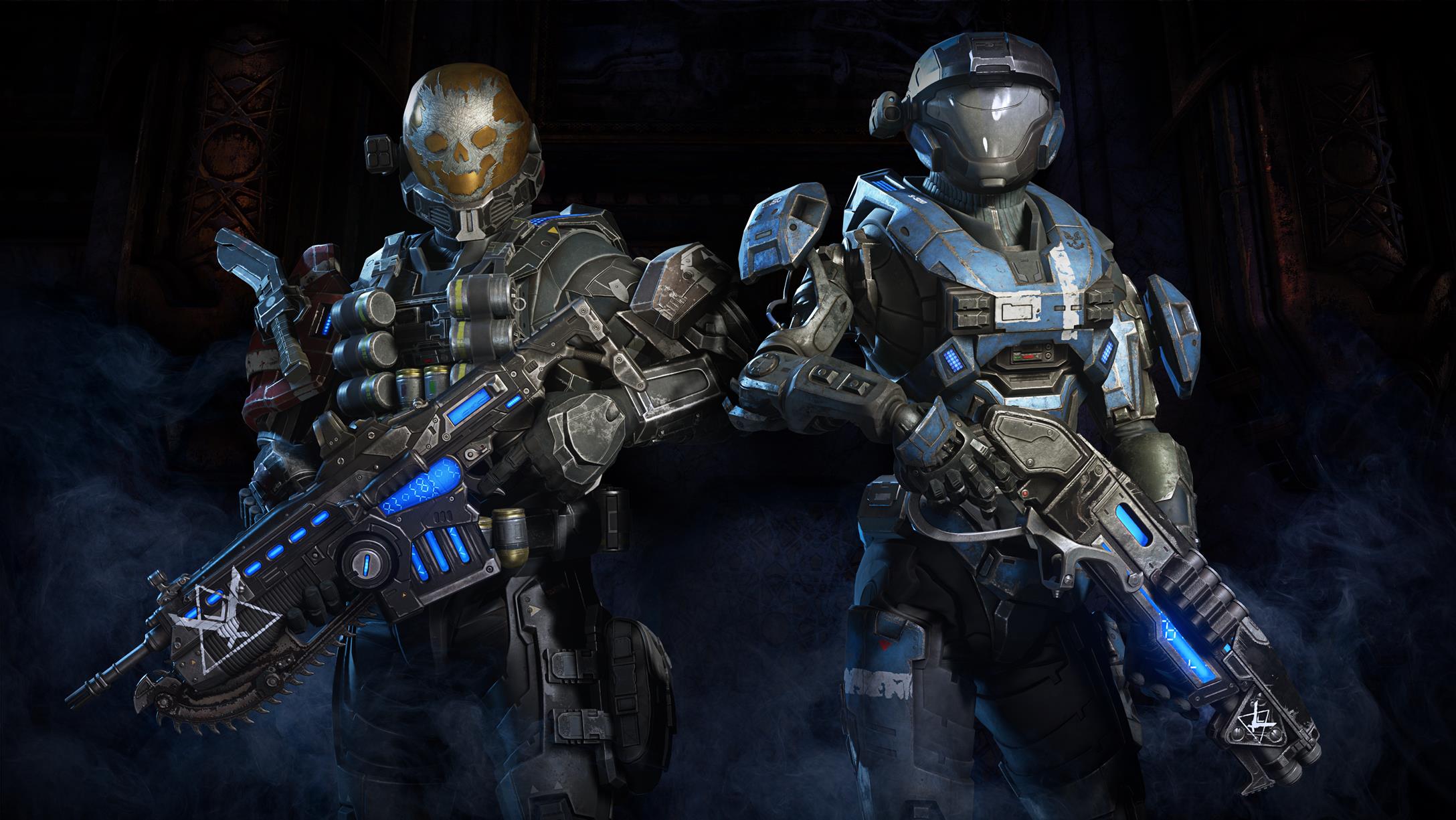 That The Coalition hasn’t stuck completely to in-universe characters drives home Horde Mode’s remit as a more casual place to enjoy Gear’s tight and gory 3rd-person shooting. However, to offset the trend towards accessibility there are new ultra-tough difficulty modifiers you can enable to beef up the challenge as much or as little as you like. Different maps also have different skill modifiers, just to make them feel as different as possible from one another.

Obviously some of the motivation behind fleshing out Horde mode to such a degree is to keep you around to pay for microtransactions, and although there aren’t any random chance loot boxes you do have to pay for most of the character skins on offer.

With that said, The Coalition has pledged to bring new maps to Horde mode for free as part of the season-like 'Operations' post-launch support. Each Operation is supposed to last about three months and will also come with new difficulty modifiers and new characters, as well as new modes and customisation options. All of this is meant to keep the metagame from stagnating, and create multiple new combinations to test out on the battlefield.

You’ll be able to judge for yourself whether it’s enough to keep players interested from September 6th when Gears 5 hits early access, with a full release on September 10.