During E3, we got chance to try out Strange Brigade, a new co-op experience from Sniper Elite developer Rebellion.

While it’s playable in single-player, the game is built as a co-op experience where you and up to three friends fight off waves of undead as you work through its levels. There’s loot to uncover, chests to open, and stats to increase. It made us wonder if Rebellion was planning to shift more towards the ‘games as a service’ model, perpetually updating the game and making it the focus above releasing new stuff.

After sitting down for a chat with Rebellion CEO Jason Kingsley, it turns out that is not the case at all. “We don’t have any interest or expertise in games as a service,” Kingsley said. “I’m a strong believer in the traditional style of game - here’s a game, you pay the price, you get the game. There’s DLC, expansion content - that kind of stuff - but that’s it. One of the problems I have as a games player - and I’m still a games player, I play a lot - is I’ve got limited time. So to kind of ‘git gud’, as people shout at me across the internet when I’m rubbish at the latest multiplayer game... I haven’t got time to get good.”

Kingsley is still fond of the traditional model for video games because he is a champion for single-player experiences. One of the things he was adamant about at the start of development for the studio’s latest game was that the entire thing would also be playable on your lonesome. 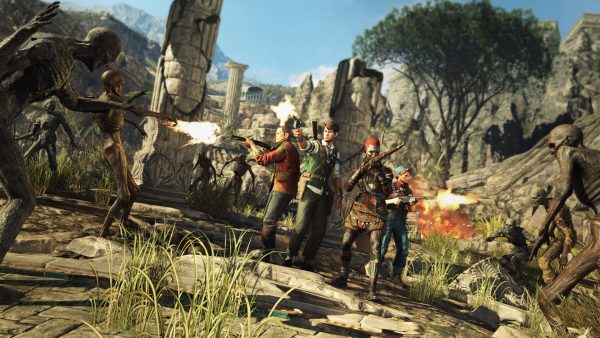 “My idea of playing a game is to escape and enjoy myself and have an adventure,” Kingsley said. “Games as a service is a bit more about keeping people in - loot boxes, and all that kind of stuff. I like my single-player games. Strange Brigade, you can play it with four of your mates against the computer, but the single-player is very important. Our game has a beginning, middle, and end. It is a game to play if you have a family, work commitments and stuff. You can play it on easy, get through it, and get a sense of achievement and be like, ‘I’ve played Strange Brigade’. It’s fine. Move onto the next thing.”

Games as a service are also a concern outside of personal preference. Rebellion is fully independent. The studio comes up with its own ideas, does the coding, does the art, records the sounds in its in-house studio, casts the actors, makes its own promotional material, publishes its own tie-in novels, and even takes the games to market. It’s a studio uniquely positioned to shun trends, which is exactly what it is doing, rather than sectioning off a portion of its studio to work on the same game indefinitely.

“I think there’s always a challenge with the big studios who are making games as a service - how many of those can they run at once, and won’t they be cannibalising their own work? You know, if a big company releases game as a service number three, are they going to be pulling people from game as a service number one or two? I don’t know,” Kingsley explained. “They’re not stupid, they would have worked that one out, but at the same time, I think that’s a pretty big change in business and we don’t need to. We’re privately owned, we don’t have any venture capitalists behind us, we don’t have any public shareholders who want to see a return on their investment - basically, my brother and I funded Strange Brigade.”