Everyone knows that watching the sun come up is a profound and grounding experience, a simple balm that nature will continue to offer until the heat death of the universe. Unfortunately, everyone also knows that getting up at 3am is a terrific ballache you’ll be paying for all week. That’s why games gave us the gift of day/night cycles.

For a while there, day/night cycles were how developers promoted their games. They were front and centre of marketing campaigns, the subject of dedicated trailers. You can still find those videos on YouTube - soothing timelapses in which dappled light gives way to long shadows, the beige beauty of sunset, and finally stars in the sky.

Why were these timelapse trailers the toast of 2008? Because they demonstrated not just graphical progress, but real change in the way we experienced games. While it’s hard to gauge the tangible effects of ray tracing on PS5 games, day/night cycles suggested true living worlds, a step beyond the baked levels that had come before. They marked the rise of RPG life simulations where you could sit down for an evening game of Gwent once the battle was done.

But then, as it always does, technology moved on. It no longer seemed remarkable for the sun to go down, and the novelty of stumbling blindly through a dark forest with no hope of spotting loot wore thin. We stopped talking about day/night cycles, and they simply became part of the baseline standard expected from all AAA developers. But some studios continued to work their light magic, pushing the art in new directions.

One such studio was Square Enix Business Division 5, the outfit behind Final Fantasy XIV - an MMO which has enjoyed extraordinary success since its reboot in 2013 as A Realm Reborn. In Final Fantasy XIV, the purpose of the day/night cycle has twisted over time.

Initially it performed a traditional role, contributing to the world’s sense of place. “If a game is a high-speed, thrilling, rollercoaster-like experience from beginning to end like an action movie, day/night cycles are merely a tool that supports the excitement,” director Naoki Yoshida tells me. “With MMORPGs such as FFXIV, the transition of time is essential for players to feel a strong connection with the game and that they are living in that world in real time.”

While it would be tempting to tie an MMO to a 24 hour clock, Square Enix has found that individual players tend to log in at a particular time of day and rarely deviate from that schedule. For that reason, Final Fantasy XIV’s day/night cycle lasts for just 70 minutes. It’s a very specific choice of number. Not only are players likely to experience change from day to night during a single session, but the rhythm of that change is slightly displaced from our own circadian clock. “This way, even if a player logs in and out of the game at set times every day, there will be a misalignment with real time,” Yoshida says. “So the day and night cycle will be dispersed.”

There are practical reasons to play Final Fantasy XIV at night, like the fish that only emerge once the light dwindles. But Yoshida believes the cycle offers more than altered fauna. “Daytime gives the impression of a safe and beautiful world,” he says, “while night time gives a mysterious impression that stirs the thrill of the adventure.” 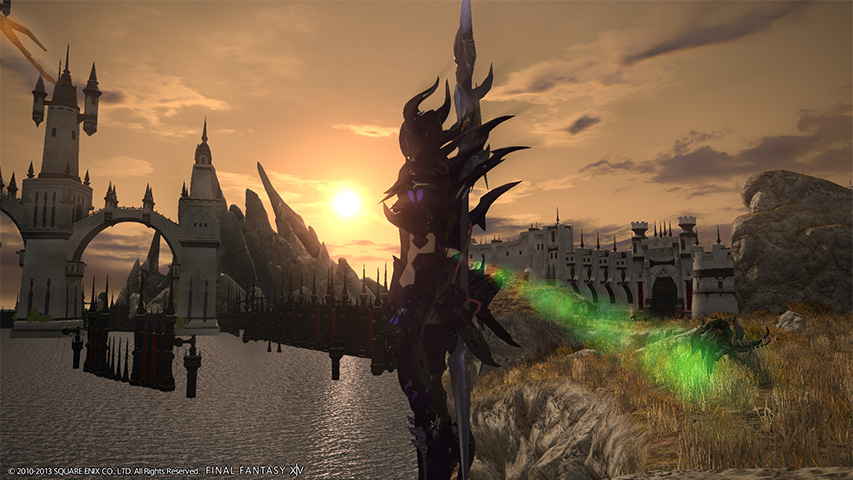 Which is why Final Fantasy XIV’s third expansion, Shadowbringers, was such an eerie prospect. It took place in a world where night never comes - an unnatural state of affairs that players fought to correct throughout its adventure. Square Enix designed its Everlasting Light to feel oppressive; its clouds were drawn thick and yellow, based on the sky of Guam rather than Japan, and between them blinding god rays pierced through. The atmosphere was one of decadence - the definition of too much of a good thing. Although, as Yoshida points out, the reverse would have been worse.

“If it was a world with no daylight, the game would become too depressing and the darkness would tire out the players,” he says. “So I’m glad we didn’t go with that idea.”

As players progressed through the story, that light receded, and eventually the night returned. “The ‘flood of light’ changed the perception that night is scary and darkness is evil, to a realisation that the coming of night is normal, and its presence makes daylight look more beautiful,” Yoshida says. “This is almost like showing good and evil as two sides of the same kind.”

Day/night cycles may no longer be lighting up the E3 stage, but these days they’ve become metaphors for understanding our own duality. And even better, nobody had to get up at 3am.