Those dubious of free-to-play would do well to check out Ubisoft Montreal’s floating castle in the sky, which seeks to put a smile on your face before it sticks you like a pig.

The Mighty Quest for Epic Loot 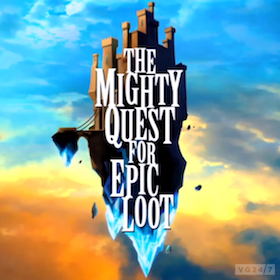 The Mighty Quest for Epic Loot is the first free-to-play title from Ubisoft Montreal, the studio better known for its work on blockbuster franchises like Assassin’s Creed, Splinter Cell and Far Cry.

Part hack ‘n’ slash, part tower defence, the game is wrapped up in a polished package with humorous baubles to boot.

Currently, each account can have one hero with which to go on the attack and one castle to defend. The castle can be modified on the fly as new parts become available.

The game will be playable on PC via a download client that currently sits at less than 200Mb.

To get on board closed testing and revel in the game’s endearing silliness, hit the website.

What’s in a name?

While the title elicits a smile and the announcement trailer prompts a surprised chuckle (watch it right to the end, to find out why) it’s seeing the varied facets of Ubisoft Montreal’s action-strategy game in motion that really pricks several shades of curiosity in me. Its humour stands bold and, as the title suggests, The Mighty Quest for Epic Loot does not take itself too seriously. Instead, its sunny disposition belies a gentle lampooning of a number of stereotypes and tropes associated with the fantasy genre.

Have you always thought that the knights of high fantasy are just a little too smug and up their own arsenal? Meet Sir Painhammer, a self-satisfied goof whose smile is as broad as his sword as he explains the many ways that the castle over which he presides will cripple and maim those foolhardy enough to enter it. This egotistical, half-baked biscuit is joined by Blackeye Bowgart, a surly crossbow-wielding thief and together they form the game’s initial two available character classes, one of which you’ll take direct control of to mount attacks on neighbouring fortresses, both player and Ubisoft-made.

There is little exposition beyond that found in the succinct title of the game: you’re on a quest that is mighty for loot that is epic. You don’t need a rousing speech from Sir Patrick Stewart or Jennifer Hale to provide context for your actions; all the motivation you could ever need is right there in the name of the game.

Have fun storming the castle

Castle crashing is one distinct half of the game and the place where most players will start before going on to balance the storming of many keeps with the creation of one of their own. Select a fortress to loot from the many floating in the local neighbourhood and you’re unceremoniously dumped at the gates and bid enter. Once inside, the aim is simple: raid the gubbins out of the castle and collect as much loot (gold, items and equipment) as is possible with the ultimate goal being to reach the final chamber and defeat what lurks within. This involves navigating the initially rudimentary layout of lower level offerings, which scale up to comparatively labyrinthine edifices as the keeps spiral upwards to the castle level cap of 35.

While raiding, your hero earns experience and unlocks skills, four of which can be selected at any one time. Each skill has its own cool down period and, as you enter a castle with no notion of the challenges that await, Ubisoft is adding the ability to swap out skills on the fly to better match the monsters or trap types presented by each unique castle.

Of course, no self-respecting castle-creator would present a lair full of loot with nary a shred of defence and so a host of creatures both feckless and fearsome will be deployed to harry the hero as they make their way to the throne room. Traps scattered through each of the interconnected rooms provide obstacles to be avoided or to endanger the invading hero, either by direct damage or by pushing you into the path of the hostile denizens – a group of gormless ghouls may appear easy enough to avoid until the trap is sprung that catapults you into their midst and they’re scrabbling to tear your arms off.

Having survived (or not) the attempted assault of several castles, you’ll likely have an inkling of what makes a fortress hard to conquer. This knowledge can then be applied when dabbling with the other side of The Mighty Quest for Epic Loot, as the storm-loot-repeat cycle is broken up by spending time on the more considered and cerebral pastime of castle creation.

By the power of Greyskull

If the all-out action of raiding a castle provides the game’s most immediate thrill, designing one’s own death trap dungeon looks to offer delicious anticipatory excitement. Constructing a castle of ruddy great proportions and populating it with maniacal rams, vicious turtles and capricious spell casters may cause titters of childish excitement, as you take what you’ve learned from being on the receiving end and adapt it to suit your own gently vindictive, level-building whims. For those who remember Bullfrog’s masterpiece, castle building might yet help fill that Dungeon Keeper-shaped hole that’s been in so many of our lives for so long.

In order to prevent the ludicrous situation in which architects of mayhem might cram a multitude of monsters into any one room, creature and trap placement comes at basic and transparent cost. Each room typically has a set defensive point allowance and each creature type costs a certain number of defensive points to place, while traps are limited by how many of them you have in your inventory. Everything is constructed, placed and put together by dragging and dropping, making castle creation a doodle and the better constructed your castle is (measured by how much resistance it offers to would-be raiders) the more gold and experience it earns for you over time.

"Constructing a castle of ruddy great proportions and populating it with maniacal rams, vicious turtles and capricious spell casters may cause titters of childish excitement. Castle building might yet help fill that Dungeon Keeper-shaped hole that’s been in so many of our lives for so long."

The discrepancy in upper level cap of 30 for heroes and 35 for castles means that there’ll always be something to do and a challenge to face, while your own castle can be scaled down should you wish to invite friends of a lower experience level to try to beat your castle. You can even wager gold on whether they’ll be successful or not. Periodically, Ubisoft Montreal intends to issue challenges of its own, inviting players to run the gauntlet against the clock through its own castle creations for leader board fame and the glory of in-game spoils.

The Mighty Quest for Epic Loot is fusing hack ‘n’ slash action with devious level design. That its free-to-play means those that might otherwise be put off by its bright and breezy aesthetics have no sensible reason not to try it (while remembering how entertained they were by the last Pixar film that they watched). As is fast becoming a familiar concept, the micro transactions here are about time Vs money, rather than paying to win. Buying items with real cash also bestows a vanity bonus as purchased traps and room types have additional snazzy visual flair over those earned in-game; nonetheless the plan is that for every item that can be bought, a slightly less visually impressive counterpart can be earned.

The unveiling of The Mighty Quest for Epic Loot has so far been restricted to a guided, hands-off demo and a trailer or two, but this game of tongue-in-cheek fantasy, dry humour and complementary play styles has me eager to experience it first-hand, which is why I’ve signed-up for the closed beta. Ubisoft Montreal is making The Mighty Quest for Epic Loot a difficult proposition to resist and as a developer taking its first steps into the land of free-to-play that strong initial appeal is worth its weight in gold.

The Mighty Quest for Epic Loot will launch on PC and is currently in closed testing.