Forza Motorsport 5 studio Turn10 has been involved in Xbox One's creation since the start. VG247's Dave Cook quizzes Dan Greenawalt on the early tech, and why the racer is pushing boundaries. 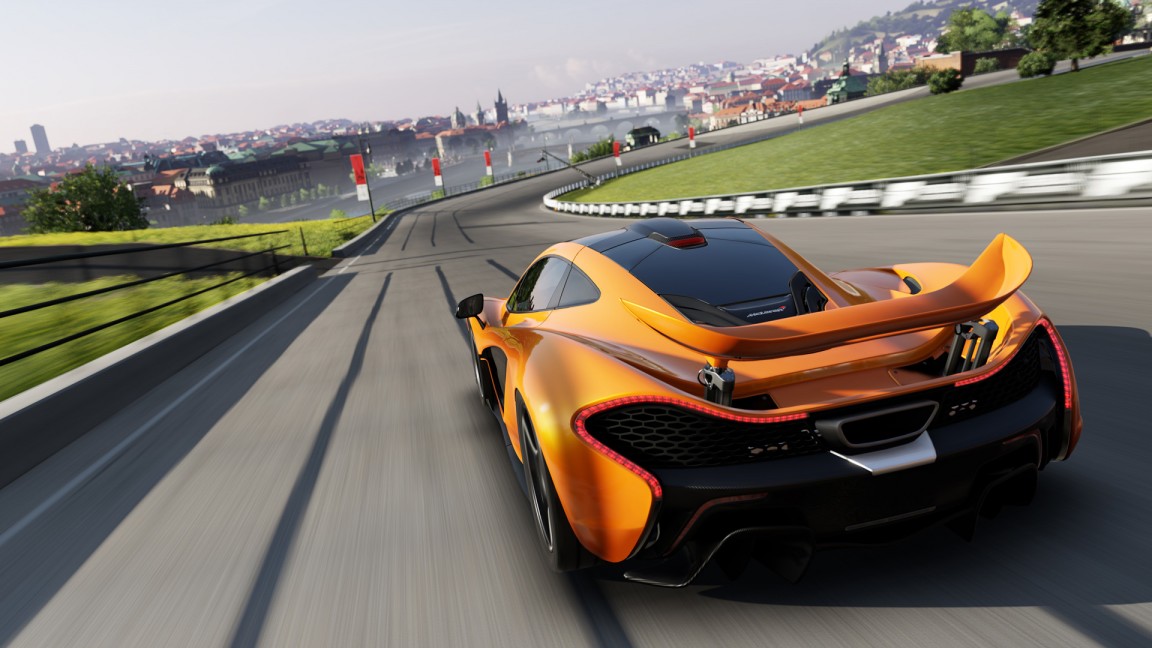 We've heard Microsoft and Turn10 creative director Dan Greenawalt talk a lot about Forza 5's new Drivatar system and the fact that it runs in 1080p at 60 frames per second. It may sound like marketing fluff but once you see it running on Xbox One you will see the difference. It's a lovely game to look at, but even I was surprised when Greenawalt told me that the racer is using 100% of the console..

It's a flaky metric, and he added that while the hardware is being pushed, the next-gen cycle will see studios optimising their code better and better to improve performance, just like they do every cycle. Still, I was intrigued. Just how does being one of the Xbox One's launch titles impact performance? How has that early exposure to the tech guided development? I asked Greenawalt these questions at Eurogamer Expo last week.

Here's what we discussed:

VG247: You're an Xbox One launch title, and you're Microsoft first-party. How early were you exposed to next-gen tech?
Dan Greenawalt: “We were exposed to the tech very early. One of the benefits of being first-party, is that when the hardware architects and everyone was starting to think about Xbox One, they came to Turn10, they came to 343 and the internal teams and said, 'What is the type of gaming console that you need for our players?' Obviously 343 and Turn10, we make core games. Now, Turn10 … our games are also played by kids and the like, but it's a core game.

“So, we were talking about how to do shaders, ways of setting up the RAM, the OS, and tools. There are ways and approaches we knew would be best-used for our gam, and part of that was, we knew from the beginning we wanted to be 1080p, and we wanted to be 60FPS. Meanwhile, we wanted to do a new take – in a sense – on how how cars should look in the next-generation.

“We had basically prototyped next-generation cars in Forza 4, because we had those Autovista, and that was us – in many ways – us playing with the idea of how we wanted cars to look in the next-generation. Now, those cars couldn't be driven on tracks. To be able to make those as a prototype allowed us to be testing the hardware very early as it was coming on. Trying to be there at launch means we're shipping our game at the same time the console is shipping, and it requires that kind of hand-holding between their team and our team.

“So in many ways, we're testing their OS, we're testing their architecture every day, so it's an incredible partnership. It's funny, because I hear it a lot: 'are you using the hardware?' The truth is, you always use 100% of the hardware. You just do, but it's a question of whether or not you're using it efficiently, and so that's what happens over a course of years.

“Between Forza Motorsport 2 and then three and four, the game got incredibly technical. The hardware didn't get any more powerful, but we got more at efficient at doing our math. We're using 100% of this console, but obviously, we will become more efficient over the years.”

VG247: Do you remember when you were first consulted by Microsoft regarding the console? What sort of discussion did you have with them?
Greenawalt: "It's funny because basically myself and Chris Tector – who is our chief architect on Forza, basically designing our engine – we were, gosh … I don't think it was very long after Forza 3, they were starting to prototype with Kinect. It was going to be coming to the Xbox 360, and they were already ideating what should the next hardware be. It was just concepting, there was no prototype, so it was just purely concepting.

“Chris and I started getting pulled into these day-long meetings and ideating where we wanted to be and all that. It didn't really start warming up until at least two years ago where it was like, 'We really know now. We know the hardware's going to be, we know the plan and all that.”

VG247: Is the Xbox One architecture far removed from Xbox 360? PlayStation 3 was a dog to code for at the beginning, clearly, so I want to get a handle on how accessible this new format really is.
Greenawalt: "The architecture is similar. Obviously, the tools are different, there are aspects to the language that are different, so there are changes. It's not a straight port. But, anyone who can use the Windows developer or Xbox 360 developer is going to understand the essence of, the logical way to think about how to program for the Xbox One."

”Between Forza Motorsport 2 and then three and four, the game got incredibly technical. The hardware didn’t get any more powerful, but we got more at efficient at doing our math. We’re using 100% of this console, but obviously, we will become more efficient over the years.”

VG247: Forza as a whole is a technical achievement already. How did you decide where to go from Forza 4? How did you plan it?
Greenawalt: "Well that's interesting because that's my job and Chris Tector's job. He's on the technical side and I'm on the design side, as far as 'what is the experience we want to create, and what is the technology required to do it?' So he and I – partnered – is like a hand and glove, ying and yang you know? I've got a place where I want us to go feature-wise for our fans, and he is so smart, so wicked-smart about how we technologically get there.

"We have a lot of innovation coming into the game, and the think about innovation is, what's really great is that one: you don't know how to really explain it. With the Drivatar stuff, people say 'oh is it like this?' or 'is it like that?' All I can really say is no, it's not like anything you've ever driven."

VG247: It's always good to see new features coming out of new tech, and to see the end of pre-scripted AI racing lines on the track. This is where Drivatar comes in.
Greenawalt: It's funny because the original Drivatar in the original Xbox, on Forza Motorsport was way ahead of its time. In fact, I don't believe it could have been by us at game developers. We had a lot of experience as game developers, but it was machine learning, and we had a partner in Microsoft Research Cambridge. Honestly, if we worked as a global game company, we wouldn't have a research department in Cambridge that could just think of things, new technologies. It's not a game company thing.

"So they came to us with a prototype for it. They do hypotheses and they build little prototypes, but they're not necessarily ready to go in a product usually. They had this prototype for racing AI, and this is back in the days of Schumacher versus Juan Pablo Montoya. They were trying to say, 'what would it be like in a racing game?', and these guys were wicked-fast right? Juan Pablo and Schumacher were incredibly fast, but they did it very differently.

"What if players could train AI, and they'd still be fast but they'd do it very differently? So we turned that into the Drivatar in the first Forza Motorsport. That was very local. You trained it like a Tamagotchi, and it would behave like you. It had trouble dealing with the complexity of our physics. Our physics was incredible complex."

VG247: But now you have all these suspension and tyre types, different surfaces and all of those variables?
Greenawalt: "Right, all the different kinematics, the suspension and all of that. That was on the original Xbox. On the 360 our physics got way more complicated, but now it's a relief because we're doing things that simply weren't possible in the last generation physics-wise. So now the Drivatar system – while it has the same name, and it's the same philosophy of training a Drivatar. It's 100% different, it's cloud-based, it's more like Bing, it's big data where it learns from everybody.

"Basically, as you drive and I drive and everybody, millions of people drive, it watches the whole system. It looks for correlations like, 'hey well there was a car in front of you and a car behind you, and you were you were heading into turn three on this track, then you hit the brakes.'

"It doesn't need to learn that you were check-breaking the guy behind you, but then it looks at all the other people and guess what? '20% of the population also did that, maybe I should learn that?' It's not learning new behaviour and it doesn't call it check-breaking because it doesn't care. It just learns that in these scenarios, people do these things.

"It learns in real-time in essence. Real behaviour. So, you've got millions of people playing for many hours. It's going to learn all sorts of things. It's already learned a lot of stuff from the 400 of us that are playing right now. And then, if I never check-break, my individual Drivatar will never learn it because I never did it. But if you're the one that trained it to do that, then your Drivatar is going to do it.

VG247: That tech must be good for metric tracking, patching and bug-fixing?
Greenawalt: Oh yeah. We had a lot of telemetry that we captured in Forza Motorsport 3 and even more in Forza 4 and Forza Horizon. What cars did the population prefer? What assists? A lot of data, and that's allowed us to be smarter in our design of number four and of course number 5. The cool thing about Xbox 360 is that it's a data-driven box. It's much more easy for us to decide if we want to change things up.

"It's not obviously like the whole game is in the cloud, so some bugs, you can't just fix that way. You have to fix it with a title update. But when it comes to just tuning, balancing and changing things, it's so configurable. It's very easy for us to … it's not like you're downloading anything, it's real data in real-time."

Forza Motorsport 5 is an Xbox One launch title, releasing alongside the console on November 22.