Once you've signed up for Fortnite mobile it's the same game that has dominated PC and consoles. As well pop-in, the newly shrunken version does have its own unique control quirks though, so if you’re planning to outlast another 99 players in those epic island brawls on your phone or tablet, heed the following advice. Here are some tips and tricks for Fortnite mobile. 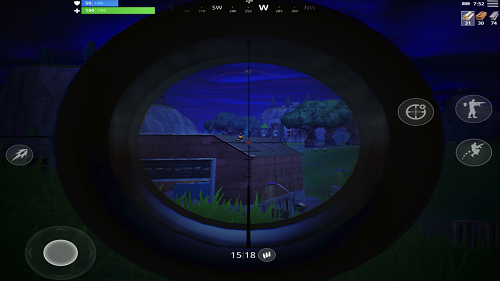 Credit to Epic, it really has done its best to make Fornite play nice with touchscreen controls. While the results are fairly successful, a little tweaking in the settings menu can make moving and shooting a smidge easier. First off, experiment with Touch Sensitivity. I find the standard setting of 40 a bit cumbersome, and ramping the slider up to 60 makes movement and camera control smoother and more responsive.

If you plan to go on long-range sniping sprees, it’s also worth fiddling with Touch Scope Sensitivity. Here, I find the default of 80 to be overly twitchy, so you may want to settle on around 65-70 to make taming that bolt action sniper a little less daunting.

Spectate matches until the end to learn from top players 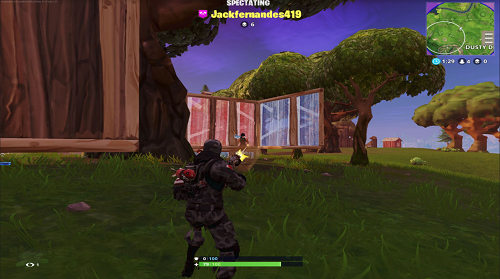 Yes, getting bumped off in Fortnite is a royal(e) pain. But trust me, it really is worth swallowing your pride and spectating the rest of the match, rather than quitting out like a slug-ridden sore loser. Observing players who’ve outlasted you often provides opportunities to watch strategies and sneaky playing styles you may never have considered before.

After falling to a few embarrassingly early deaths, I found spectating other players taught me some valuable lessons. One player I watched showed me how to quickly build and stack ramps together to create impromptu stairways to rooftops, and in general, I find watching rivals making kills after my survivor had bought the farm encourages me to play with more confidence and aggression.

Bunker in by building barricades 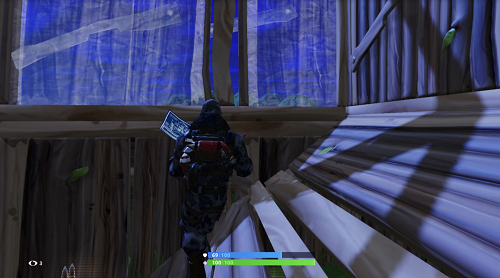 Always. Be. Building. Granted, Fornite’s mantra is a lot less sweary than Alec Baldwin’s code in Glengarry Glen Ross, but repeatedly constructing walls and fences to provide protection could just be the difference between ending up as lone survivor or savagely turning the air blue after another losing performance. To help your inner architect with their budding builds, keep harvesting wood, bricks, and metal by smashing up trees, stone buildings and abandoned vehicles with your pickaxe.

When the map has been mostly swallowed up by the Storm Eye and there are only 20 or so players left, playing defensively can work to your advantage. If you’ve been stockpiling resources throughout a match, you can erect a mighty little fortress to protect you from enemy bullets.

Just bear in mind brick and metal structures take considerably longer to build than wooden ones, though they are far sturdier. Hunkering down in the basement of a building, then surrounding yourself with stone barricades, may be cowardly, yet it can be an effective way to ensure your survivor and their yellow belly makes it to the final stages of a match.

Get a feel for weapon handling in the loading area 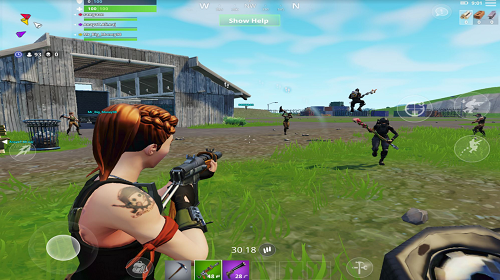 Fortnite drops you into a pre-match hub area for a minute or two before the skydiving slaughter kicks off. Rather than break out your character’s pointless dance emotes, forgo the unnecessary boogieing to get some target practice in.

Aiming on a teeny iPhone screen is challenging – I still often struggle to hit players consistently even on my iPad Pro’s 12.9 inch display – but I do find practicing with the various guns lying around the hub, even for a few seconds before matches, can help sharpen my trigger finger. 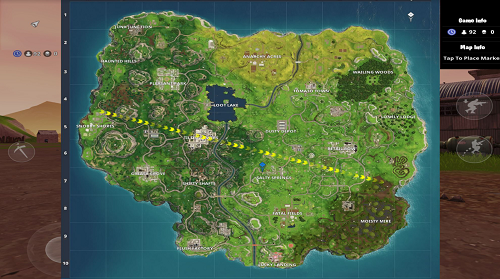 Another handy tip for the pre-match lobby is to do a spot of route-planning. Rather than idly twiddle your thumbs waiting for the survivor shootouts to begin, open up the map, inspect the highlighted yellow path the Battle Bus is about to take, and plan your landing spot accordingly by placing a marker.

As soon as you’re on the cloud-hugging coach the highlighted route will disappear, but crucially, the marker will remain, giving you an early target to head for. In Fortnite, a little forward planning usually pays off. 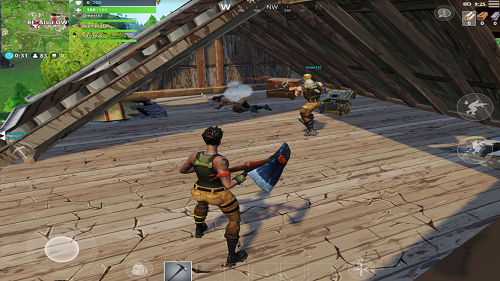 Staying in close proximity to teammates in Squad matches can be really beneficial – several guns are a hell of a lot more potent than one. Still, it’s all too easy to find yourself lone wolfing it if you screw up the initial descent down to the island. Though allies’ nametags appear in the distance to help you locate them should you land half a map away from friendlies, such lengthy, lonely treks will likely end with you catching a bullet.

The key to staying together as a tight-knit unit lies in parachuting from the Battle Bus at the right moment. Wait until you see the highlighted names of squadmates plummeting from the flying coach before you throw yourself out. Once you spot an ally skydiving towards the island, try copy their trajectory to land in their general vicinity. Once you’re on terra firma, stick close to your newly grounded pals and your collective firepower (well, provided you’re all packing decent guns) should overwhelm any lone survivors you stumble across.

Audio is no longer everything, so look out for the new visual markers 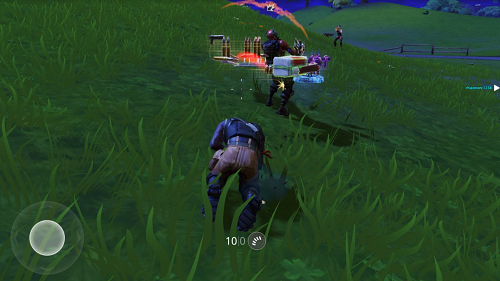 While listening closely to your surroundings is still a useful strategy for identifying enemies in Fortnite mobile, it’s no longer quite so vital as it is on PC or console. If you find yourself on public transport without headphones, you can still succeed even when you’ve muted your phone.

Thanks to new visual indicators that highlight the direction gunshots are coming from, it’s easier to stay aware of nearby danger without the need for audio cues. Markers also appear over chests and guns to make identifying goodies at a glance easier. 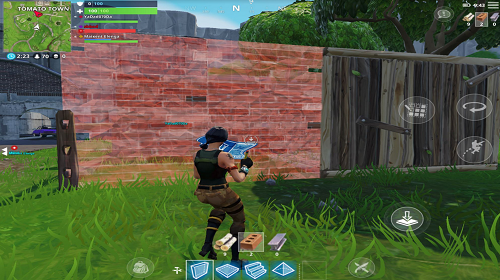 Unlike early versions of the PC and consoles editions, Fortnite on mobile has turbo building patched in from the start. This handy feature is turned on by default, and frankly, you’d be several shooty sandwiches short of a picnic to switch it off. With turbo building enabled you can freely move and pivot the camera as you construct barricades.

Keeping mobile while laying down structures is especially useful when most of the active playing area has been engulfed by the Storm Eye. The smaller your surroundings, the more you need to be on the lookout for enemies, so keep panning that camera while you build your paranoid wooden forts.

Crouch while aiming to improve accuracy 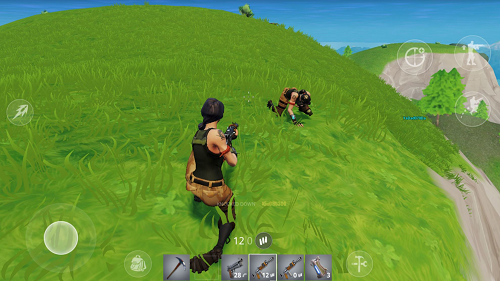 Chances are, it’s going to take you a fair chunk of time to get completely used to mobile Fortnite’s handling. Even sitting (alright, slouching) perfectly still in a comfortable chair, I often feel a little awkward when tapping the right side of the screen to fire. To give yourself a better chance of hitting your target, tap the crouch icon to reduce weapon sway. As a bonus, your character will now be harder to shoot… even if their newly cramped posture is likely to ruin their virtual shins.

Have you found any other useful tips to improve your odds of becoming the last player standing? Let us know in the comments!