Fortnite mobile is very popular, especially now that anyone on iOS can play.

Since Epic Games opened up Fortnite mobile to all iOS players earlier this week, the game has raked in $1.8 million.

According to Sensor Tower, Fortnite has become one of the most successful mobile launches ever, and saw a 197% increase "in player expenditure" on Monday, April 2.

This is a huge jump compared to the $620,000 average spend across all previous days when the game was invite-only, totaling more than $1.8 million for the day.

Mobile revenue for Fortnite worldwide has now surpassed $15 million gross in just 20 days, $10.5 million of which was paid to Epic Games "since the game began monetizing on March 15," according to the report. Global installs of the game have topped 11 million since launch. 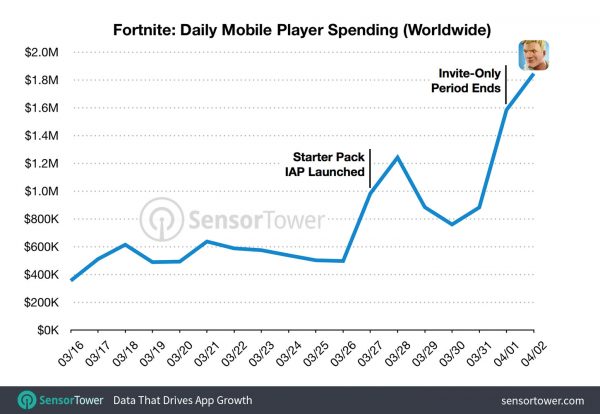 Sensor Tower said in the US alone, Fortnite has generated more than $6 million over the past week, and is the number one title on the App Store in over 20 regions.

The analytics firm predicts Fortnite mobile will earn $3 million or more per day once the game is available for Android users.

"If its performance on the App Store to date is any indication, we can easily see the game grossing $3 million or more per day once the Android user base grows to a comparable size in relation to iOS," reads the report.

"That’s potentially just the beginning for what started as a surprise release and it is already one of the most successful mobile game launches ever."

A release date for Android hasn't been announced for Fortnite, but Epic previously said to expect it "in the next few months." 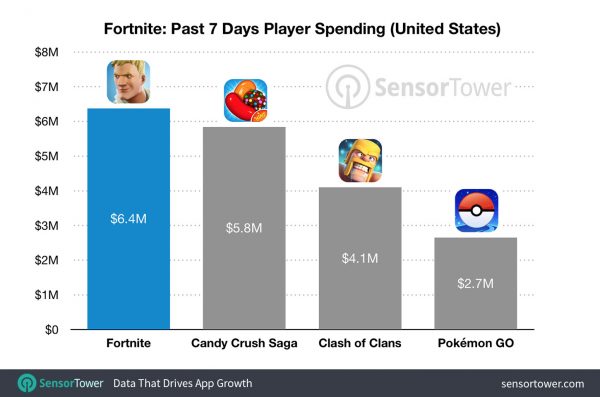 Fortnite mobile supports cross-platform play with PS4, PC, Xbox One and Mac. This means game play and game progression will work and be saved across those formats.