Fortnite lays a good foundation, but it needs to expand beyond charm and a neat building toolbox.

Because if you draw up a checklist of things that get geeks and gamers excited and then take a look at Fortnite, the odds are pretty high many of the items will be ticked off. Zombies? Check. Minecraft-style crafting? Check. A wide range of uniquely charming player classes? Check. It’s no wonder expectations for Fortnite went through the roof every time Epic Games rolled out a new trailer.

Now the early access edition is available for purchase. Does Fortnite deliver? The good news is that Fortnite can be fun and has several technical achievements worth praising, even if the current product isn’t as refined as we imagine each of its individual parts to be.

Fortnite takes place during the most adorable, aesthetically pleasing version of the zombie apocalypse we’ve seen yet. When mysterious, zombie-spawning storms blanket the entire world, survivors are forced to reach remote base camps where energy shields keep the weather at bay. As the new commander of an abandoned base, you are responsible for recruiting heroes, rescuing survivors, gathering resources, and perhaps even finding out what started this whole mess.

If you’re sick of the typical, gritty zombie shooter, Fortnite will be immensely refreshing right off the bat. While the setting is post-apocalyptic, it’s all presented in a bloodless, light-hearted manner. Your guide to Fortnite’s world is a charming robot who walks a fine line between awkward and endearing. The heroes are constantly smiling as though they haven’t just lost all of their friends and families. Even the zombies - called husks - have a certain charm. It’s hard not to smile when the latest husk type you’re introduced to marches in your direction with a beehive stuck on its head. 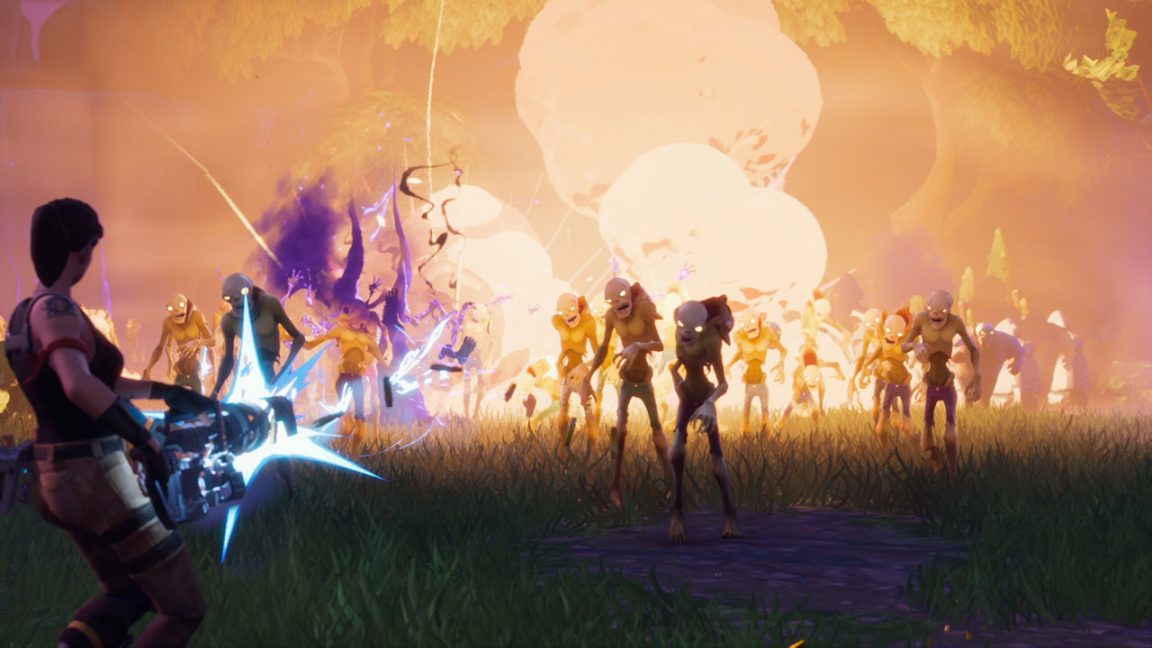 "Fortnite's construction system is fantastic, being well-designed and fully available from the first mission. There's lots of room for creative designs, and it's immensely satisfying to watch them take shape - and a little disappointing that most of them are temporary bases."

While your commander is relatively safe inside the base, you’ll still need someone to gather resources and interact with the outside world. That’s where hero characters come in, each of whom has a distinct visual design that leaves no doubt to their abilities. Soldiers are your above-average fighters, ninjas gain bonuses to melee combat, pathfinders can quickly traverse the map, and constructors add unique perks to defensive structures. And as an additional touch, there are male and female variants of each class, each of whom makes for a unique character in their own right.

Most missions follow a fixed formula varying only by difficulty. First, your hero party must explore a procedurally-generated map to locate the primary objective and scavenge for resources. Once the objective is located - usually some macguffin like a research weather balloon or a storm-dispersing generator - you’ll need to construct a fortress that can defend it from husk assaults. Finally, you must survive husk waves, repairing damaged walls or traps while supplementing the defense with your own firepower. As you progress in the game, you’ll unlock other mission types - such as sweeps to locate survivors in infected cities - but by and large, this formula applies to most mission types which differ in name only. 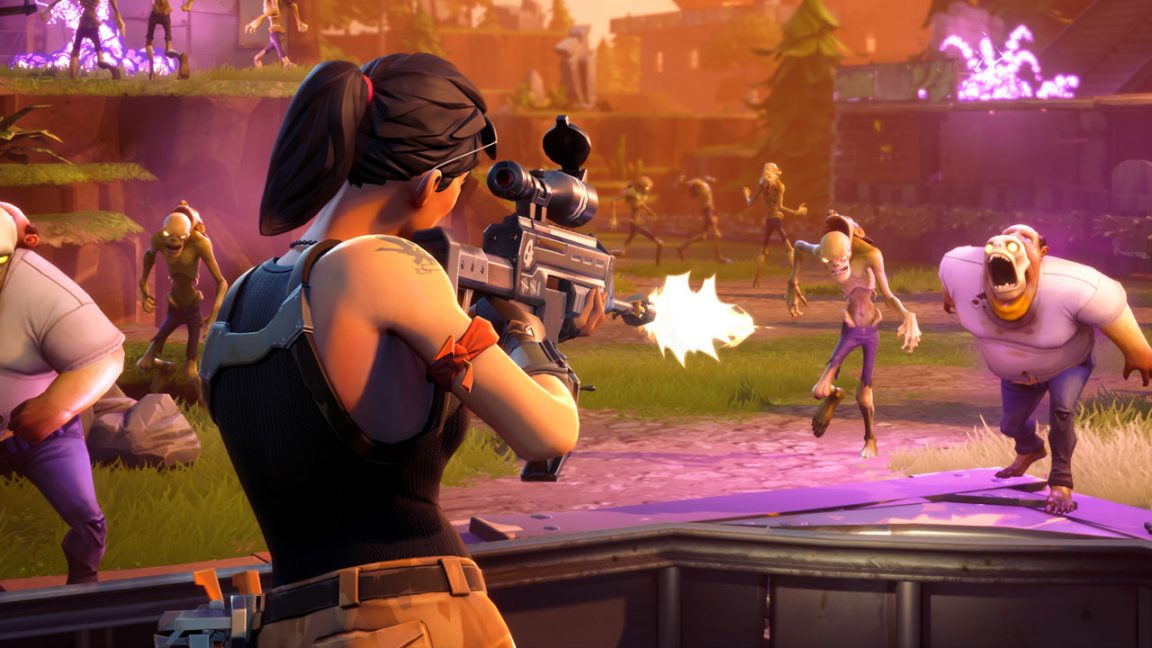 One notable exception are Shield generator expansion missions, where you assemble a primary fortress outside of your home base. Unlike temporary forts in regular missions, this is a permanent outpost for your commander which can be customized to your liking. By using resources scavenged from other game locations, you can develop anything from a giant stone castle to a scrap metal skyscraper, complete with multiple floors, elaborate traps, and husk chokepoints. If you’re playing with friends, you can also grant them permission to add their own modifications, working together to assemble an impressive home base - right before taking on enemy hordes as a team.

On paper, everything seems like a perfect mix of gameplay elements - resource collection, roguelike map generation, open-world survival, Minecraft-esque crafting. And, of course, zombies. In practice however, most gameplay elements are fleshed out just enough to be functional, but aren’t robust enough to stand on their own. Exploring and scavenging houses in the suburbs feels exciting at first, but there aren’t enough encounters to make each trip feel special. The procedural map generation provides some great environments to play in, but sometimes will repeat the same object layouts within the same house.

It’s worth saying these systems do improve - but it takes time. A huge volume of Fortnite’s non-construction features need to be unlocked by the player, sometimes by spending XP on hero abilities or investing skill points on brand-new gameplay mechanics. One of my favorite examples include NPC squads, made up of rescued survivors who can assist on missions or defend your home base. But unlocking a significantly-sized fighting force requires a large number of skill tree purchases.

"Fortnite is a lot less casual than its charming visuals let on. Don’t let the oh-so-cute dialogue fool you. A significant time investment is expected of you before you’ll be comfortable with it."

What’s more, you’ll need to get used to Fortnite’s confusing controls well before that point. The main problem is that Fortnite uses an MMO-inspired UI and control scheme that is typically well-suited to keyboards. Tutorial missions present an unending stream of circumstance-based button presses, most of which are completely forgotten. The same button that opens the build mode can be held down for an editing mode, changing your entire layout if the timing is off. The gamepad opens up a map across the entire screen, but won't disappear if you use the circle button to cancel like 99 percent of console games. While an admirable job has been done to translate everything to a gamepad layout, there will be adjustments for anyone more versed in casual shooters.

These are not insurmountable problems, but they do highlight that Fortnite is a lot less casual than its charming visuals let on. Don’t let the Pegi-12 rating and oh-so-cute dialogue fool you. A significant time investment is expected of you before you’ll be comfortable with Fortnite.

The good news is Fortnite’s construction system is a fantastic exception, being well-designed and fully available from the first mission. Any player can quickly assemble a fortress using walls, floors, ceilings, stairs, and objects - each with their own set of permutations. You can edit portions of walls to allow for windows and doors, or simply reduce the wall to a protective fence that’s easier to defend. Building materials include wood, stone, and metal collected on missions, each of which provide bonuses to overall defense. Within seconds, just about any player can design a simple fortress, and expand into a multi-story fortress with just a little more effort. There’s lots of room for creative designs, and it’s immensely satisfying to watch them take shape - and a little disappointing that most of them are temporary bases.

It’s just a shame that Fortnite’s crafting doesn’t quite mesh with the other game systems. Everything outside of crafting essentially exists to support fort building, but fort building is an end in itself. Since almost everything you build has little permanence, nothing constructed can feed back into other gameplay mechanics. And while that may be the point - Epic Games wants you to focus on building forts after all - some players will prefer exploration and scavenging, which isn’t as rewarding on its own.

This isn’t to say Fortnite isn’t fun to play - it’s just the experience isn’t quite as refined as individual games like Minecraft which inspired it. With a full party of friends, Epic Games’ latest entry is greatly enriched from drop-in sessions, since you can explore ruins together and design especially impressive forts. But despite its lengthy development time, Fortnite still feels like it hasn’t quite hit its potential. As an early access game hopefully that will change, but its animated charms may not be enough in the meantime.

Fortnite is in Early Access on PC, PS4 and Xbox One. It goes free-to-play next year.