A new season of Fortnite is right around the corner and this time, we're getting new teaser comic books from Marvel.

The Marvel x Fortnite crossover continues into Season 4 as Thor and Galactus find the Fortnite island. Galactus is hell-bent on consuming the energy of the planet, and Thor is hot on his heels.

Unfortunately, he runs into Jonesy and co who ignore his request for aid and is promptly eliminated, thus beginning what's likely to be the wildest match in history.

There are two comics out so far, with the official Fortnite and Marvel Twitter accounts showcasing one each over the weekend, so there's likely to be a bit of back and forth.

You can expect the next instalment from around 3 pm BST/ 7 am PT/ 10 am ET each day, so check back soon for more info. 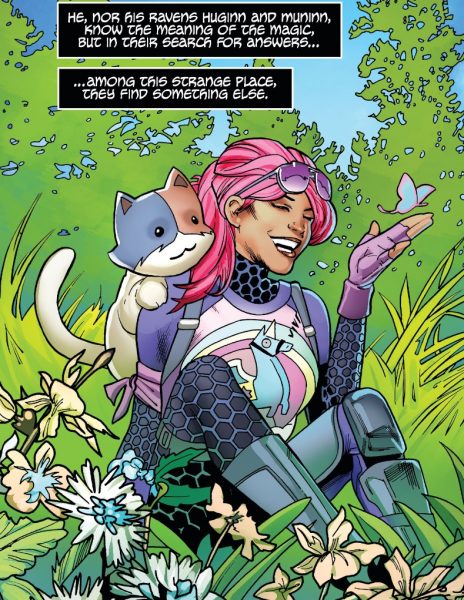 Each teaser brings with it a new letter and so far we have NEXUS, which refers to the Nexus connections in Marvel Comics.

The Herald has found The Island.

The first teaser mentions an upcoming war, as the Black Winter approaches. Galactus and Thor set out to consume the power of five planets to push the war back, but Galactus soon discovers the Fortnite island. The comic ends with Thor arriving behind him and trying to find signs of life.

His warning is dire. Will they hear?

This trailer shows Thor's attempts to reason with the locals, but all they want to do is get that sweet Victory Royale, so he's taken out. It ends with him sighing and saying "very well then..." as if he accepts this strange custom.

THEY cannot defeat HIM without working together.

The third teaser is here, alongside the letter X. Thor has dropped his hammer and lost his memory for a second until he remembered he's on the Fortnite Island, having unwittingly entered a Battle Royale. The tagline suggests that the Fortnite characters will have to band together with Thor to defeat another enemy - likely Galactus - instead of fighting amongst themselves.

He threatens the fate of all Reality.

The latest teaser brings the letter U and Thor has lost his memory. He soon realises that Galactus is on the Fortnite island, and sends a raven to the daughter of Asgard, Sif. He's forgotten that they were working together, so there's likely to be a big ol' fight on the way.

The War to save Reality begins tomorrow!

Iron Man, Captain America, Wolverine and a bunch of others have arrived on the Fortnite island - with all of them conveniently losing their memories. The war begins tomorrow when Season 4 begins, so check back soon for trailers.

You can also take a look at the latest Season 4 rumours here. Fortnite: Chapter 2 Season 4 begins on August 27.

Here's where you can find the Choppa and how to complete a lap of Motorboat Mayhem.

If you're playing the Marvel's Avengers beta, you can check out how to get the Hulk Smashes Pickaxe here.