Right now, we don't know exactly where Final Fantasy 7 Remake stands. The new trailer released as part of PlayStation's State of Play stream tells us to expect more information in June, but that feels like a hundred years away. How will the game play? How different will it be to the original? How will it portray some of FF7's most iconic characters and scenes?

I'm a sad act, so I've been thinking about this a lot, watching the trailer repeatedly, and trying to glean hints as to what FF7 Remake might be like from it. Here's some very nerdy fan observations from that obsessive trailer-dissecting session.

For those who never played the original who want to experience the remake fresh, this article obviously contains spoilers for the original Final Fantasy 7.

Everything we saw is in Midgar

One major thing to note in the trailer is that just like the previous footage of a now-outdated build of the game, everything we see is within the walls of the mega-city of Midgar.

This is significant because when FF7 Remake was announced in 2015 it was revealed to be an episodic project. Rather than being episodic in the Life is Strange sense, this would be more comparable to Final Fantasy 13, 13-2 and Lightning Returns - multiple full-size games that follow on from one-another like traditional sequels. This structure, Square Enix explained, would allow it to cost-effectively recreate the sprawling world of FF7 without cutting corners.

Seeing only Midgar in the trailers so far could simply be a marketing and spoiler-related choice. It could also only be this is the only segment of a larger game that's ready to show. However, it does tease one other possibility that's been suggested by fans since 2015: that part one of FF7 Remake will only contain the section of the game set in Midgar.

In the original game leaving Midgar and breaking out into the wilder world is a big moment and could absolutely work as the climax of an individual game. Midgar is also ripe to be expanded, as it's established both in the original FF7 and in extended media as a huge place with many different facets to it, from the poverty and suffering below the plate to the opulence above - the latter of which is barely explored in the original FF7. With that said, not everything seen matches up beat-for-beat to what we know of the Midgar chapter of FF7... 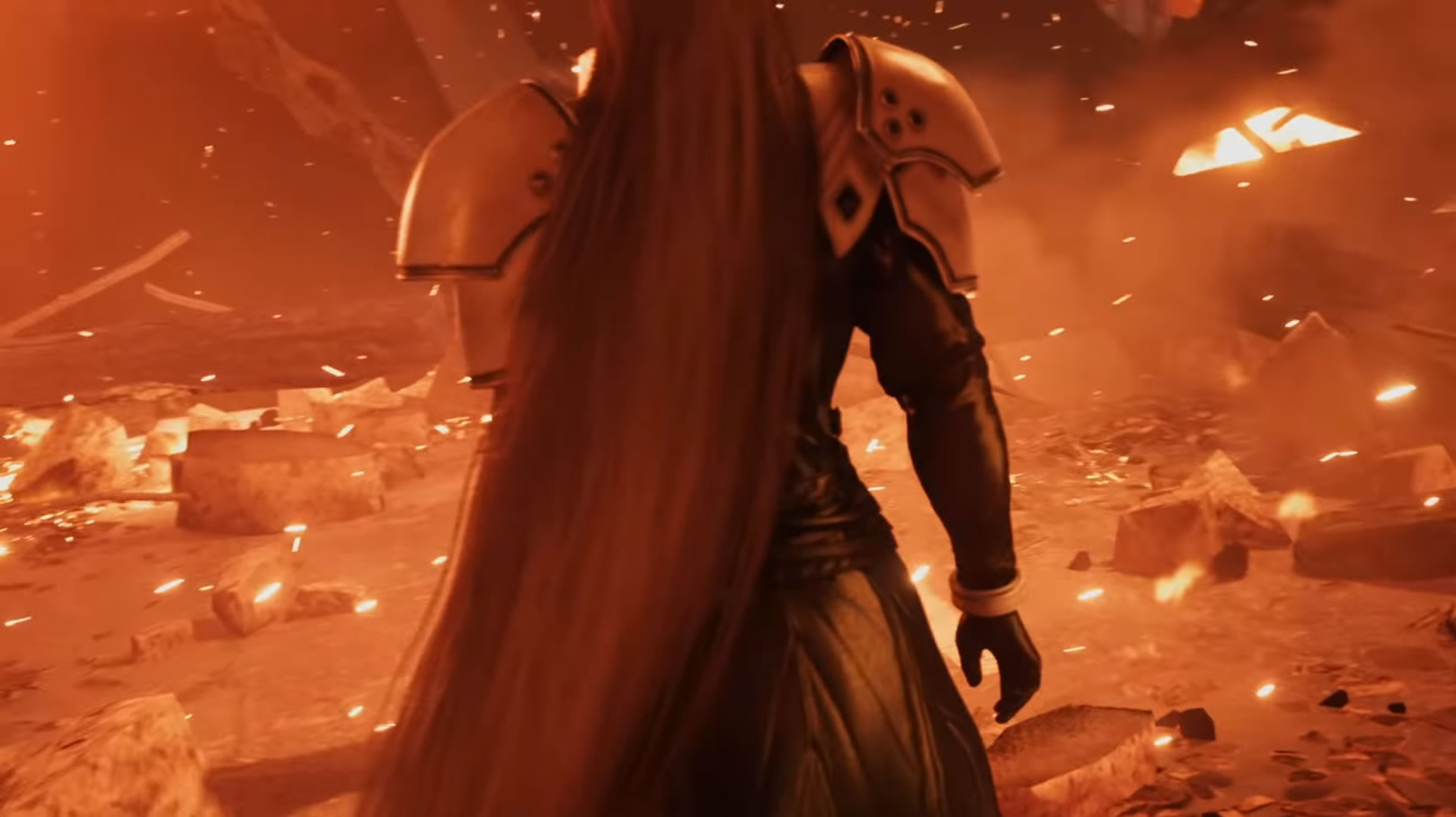 The elephant in the room in the trailer is an appearance by Sephiroth, who makes no in-person appearance during the Midgar section of the original game. He's in fact missing and presumed dead at this time. He's a ghost from Cloud's past, mentioned as a legend. Though he does burst onto the scene during Midgar's finale, he still still goes unseen, represented only by the bloody carnage he leaves in his wake. This is, incidentally, an all-time great way to introduce a villain. The mood of stalking through blood-streaked corridors absolutely sets the tone for his brutality and evil.

In this trailer, however, we see Sephiroth at what appears to be an earlier point in the game, and speaking dialogue we don't find in the original.

It seems pretty easy to pinpoint exactly where in the game this scene likely is. Cloud is surrounded by fire, wreckage and explosions, and we know from the original game that during some of the Mako Reactor-destroying terrorist missions he suffers hallucinations that are related to Sephiroth and his past. In FF7, this is less explicit - eerie inner-monologue set against a jet black screen - but if I had to guess, Sephiroth's appearance here taunting Cloud is a replacement for that, a hallucination of his greatest nemesis.

The direction of the scene seems suspect to me; though this is just a snippet, we only see Sephiroth from behind, his face obscured - and this may be the aspect of his character that's saved for a more final reveal when he steps into the spotlight as the main villain. It also makes sense in tandem with the point above, however - if Midgar encompasses all of FF7 Remake's first entry, it'd make a lot of sense to give Sephiroth more presence in that first chapter even when he isn't physically present to build towards his flashback reveal at the onset of chapter 2. 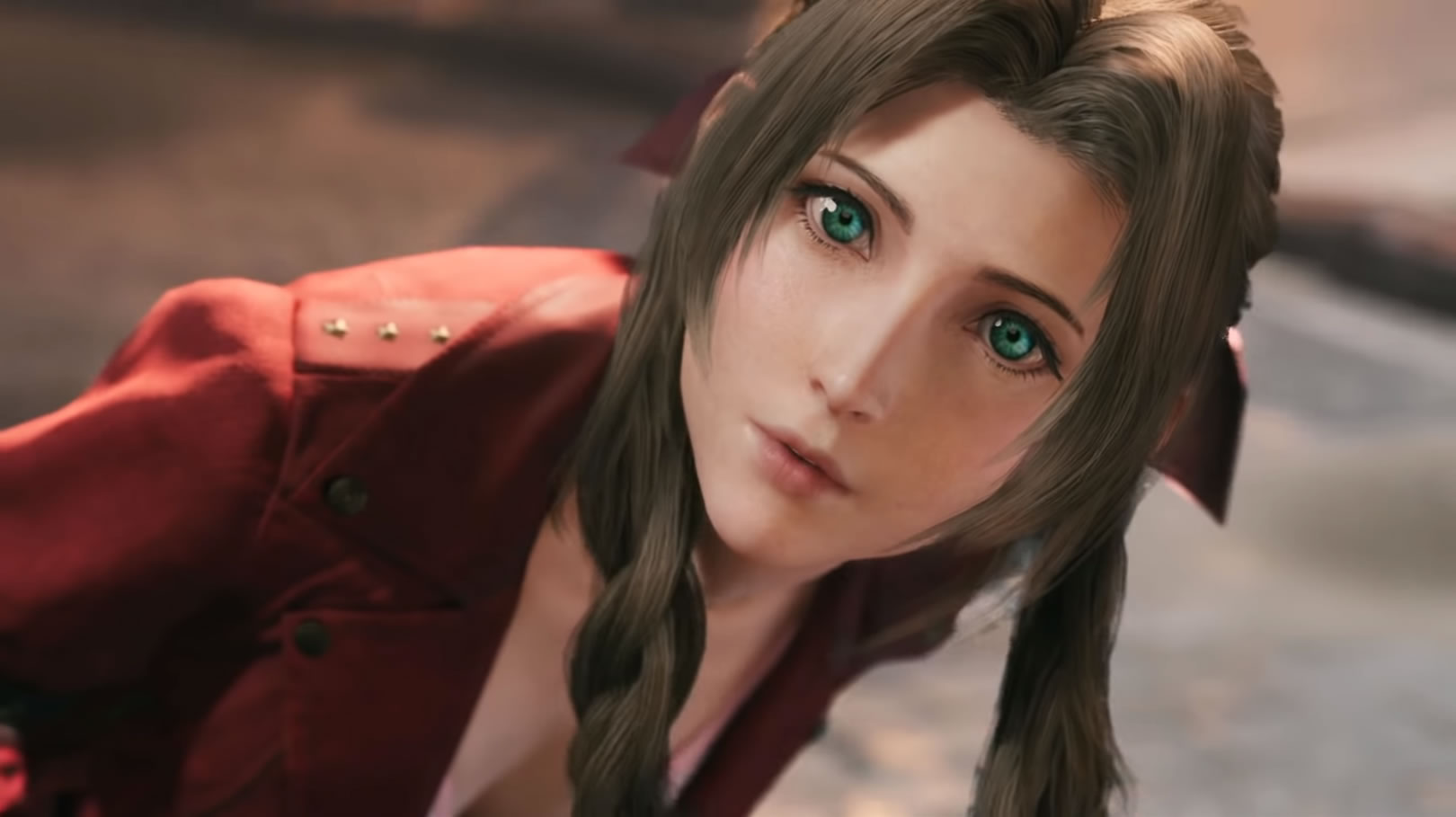 While pretty much every character has undergone something of an overhaul in this trailer compared to the last, Sephiroth isn't the only debut: Aerith is also here for the first time. She's got a subtly-tweaked design, most different in the form of a way more practical skirt. What's more interesting to me, however, is the scene she and Cloud appear in.

In the original game, Cloud and Aerith meet on the streets of Midgar. He's on the run and she's selling flowers. That much looks the same here, but what's curious is the setting. In the remake version of this scene things seem quite calm: it's a regular street with a car in the background and pedestrians casually walking around. In the original game, the pair meet on scorched streets - wrecked cars, rubble and fire - in the aftermath of Cloud and the AVALANCHE group blowing up one of the Mako reactors. It's clear that if nothing else, either the timing or location of this scene has been adjusted - and this is a great hint at how much events may be changed in the remake versus the original FF7.

One other thing that's interesting about this scene is the dialogue, also. The previous real-time trailer for FF7 Remake featured lines that were more or less wholesale ripped from a mixture of the original Japanese and the liberty-taking PS1 localization - but here, we hear new, different lines in general. Though it's difficult to tell in the context of a trailer, the presentation of this scene seems different, with Aerith seeming to offer Cloud the flower rather than ask him to buy one. We could be cutting around player choice, but this conversation in the original game is home to three to four dialogue choices that help to shape your future relationship with Aerith. Will those choices remain intact in the remake? The delivery of the snippet in the trailer suggests more a full-blown, hands-off story scene than one that'd pause for choices.

This raises a larger question, too: what of things like FF7's iconic dating sequence? At one point in the original game Cloud goes on a date with one of the members of his party, with the date determined by how you've spoken to characters up until that point. The choice to buy a flower or not is the first that impacts this storyline - but does a branching date that could potentially end up with Cloud and Barret awkwardly enjoying romantic fireworks together fit a more cinematic story that'll no doubt want to drive home Cloud and Aerith's connection for maximum emotional manipulation?

All of this links back into questions I previously raised when I said Final Fantasy 7 remake's biggest challenge isn't scope, but tone. I wouldn't be surprised to see a lot of things like character choice and goofy non-canon dates stripped out in pursuit of a more deeply cinematic story with a more consistent tone. 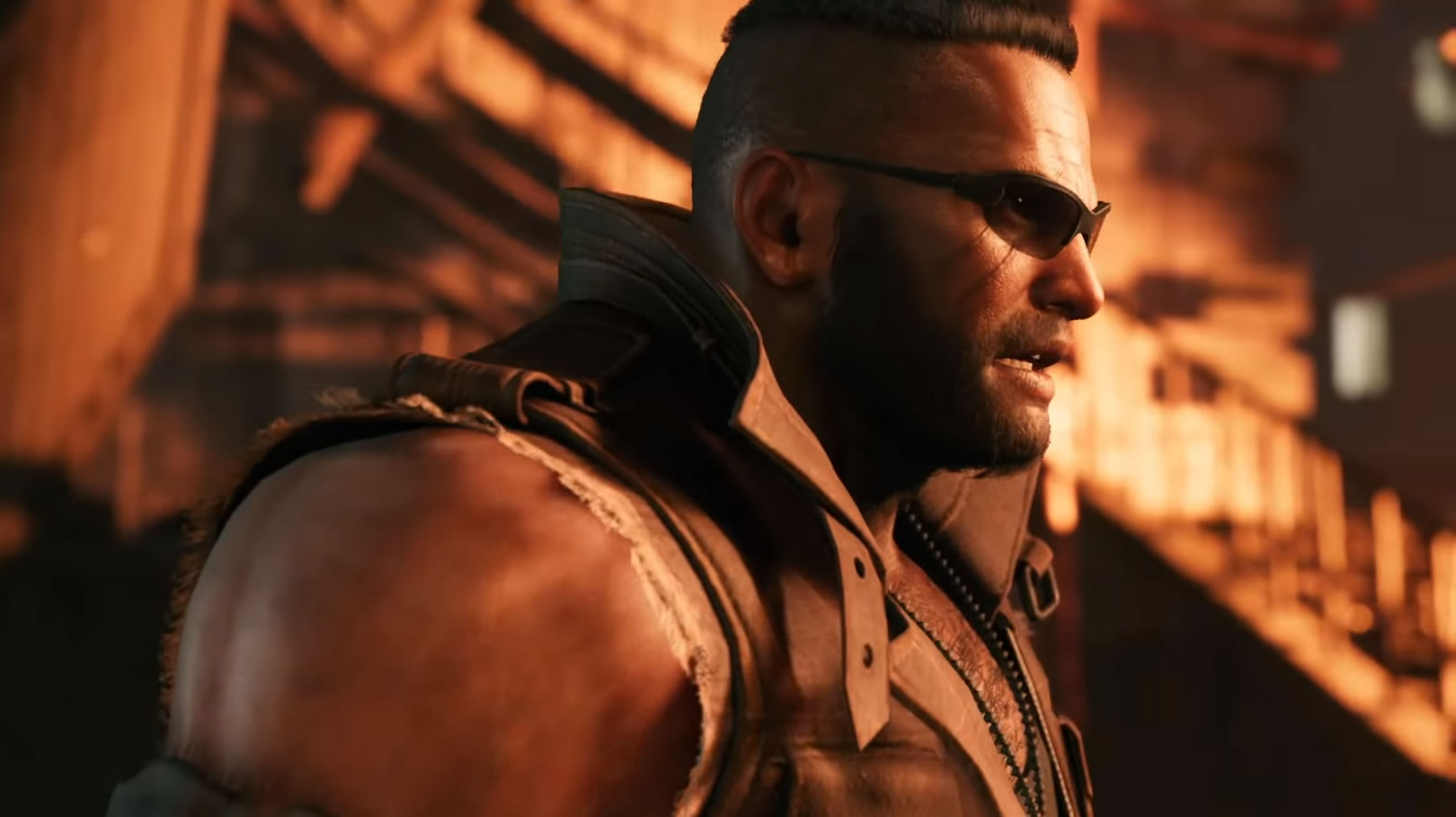 Barret has a new voice direction, and it's finally right

FF7 hard-man Barret has had a voice since the movie spin-off Advent Children, but for my money it's never quite been right. To be clear, we in the West were spoiled by a silly, over-the-top Mr. T style dialect that wasn't anywhere near representative of the original Japanese text, but the buttoned-up, gruff voice-over and writing found in the film and compilation games never felt like Barret to me. I once said that DMX should do Barret's voice over, and I was only half joking. I was disappointed when the compilation voice returned in the previous trailer.

As such, I'm very pleased to see a change of direction for Barret in this trailer. He has the sort of delivery and diction now that feels more fitting of a character prone to fits of righteous anger and melodrama. In fact, this execution feels like a great halfway house between the original Japanese characterization as-written and the over-the-top but iconic localized version. Mediating between those two tones, both beloved by fans of different regions, is one of the remake's key and most difficult challenges.

Final Fantasy 7 is absolutely choc full of weird little nuances like this, like Cait Sith speaking in a specific regional Japanese dialect that is different from that of Reeve, his controller. This is a point lost in the original translation entirely. The subtle shift in Barret's localized voice - which might not even be a new actor, but could just be a change in direction - gives me hope that this aspect can be nailed. 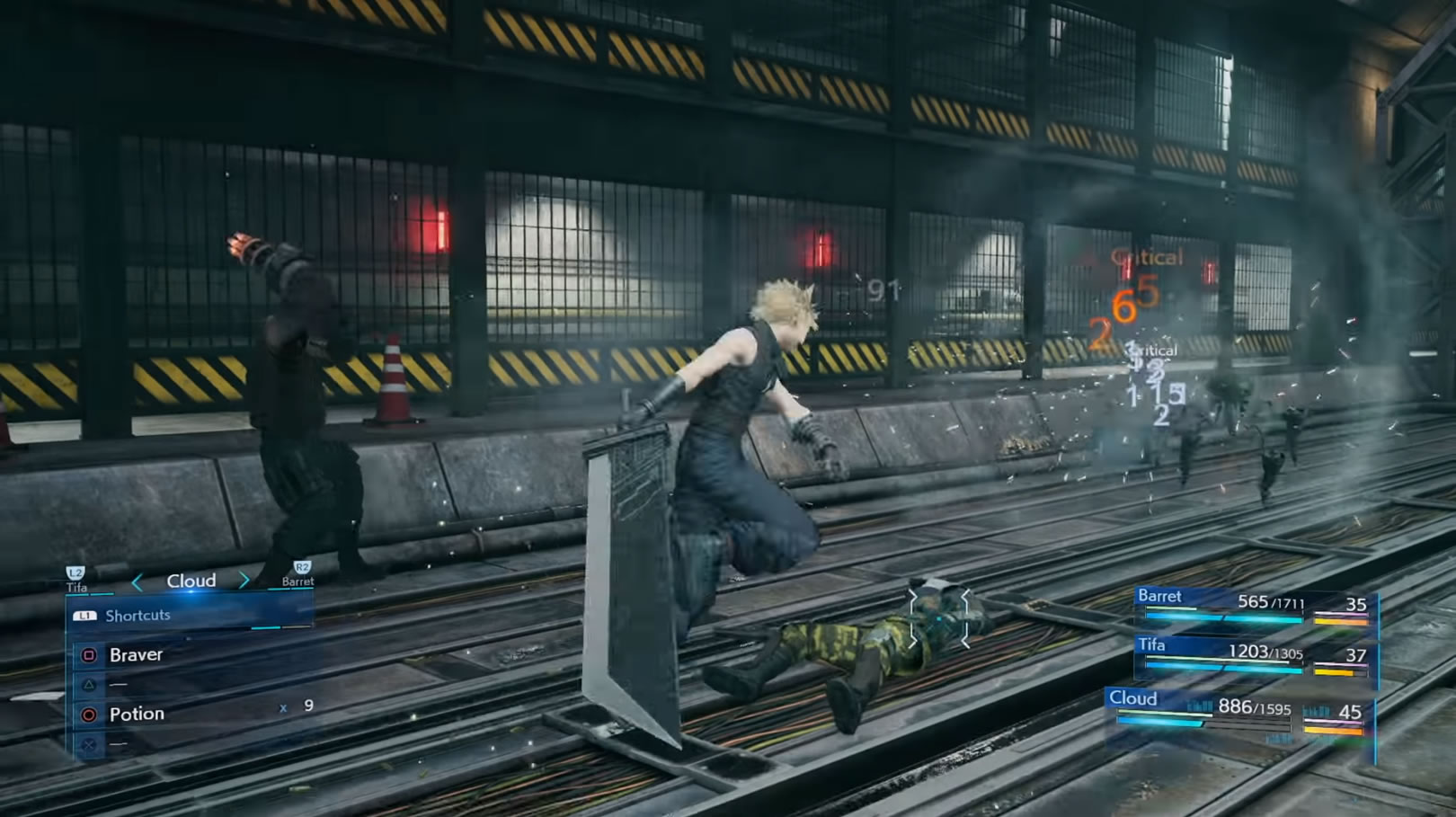 Final Fantasy 7 Remake has clearly gone through a few different iterations. Just looking at the difference of the user interface between the first non-CG trailer, some later screenshots and the latest footage shows that. This new trailer makes one thing clear, however: this combat appears to resemble Kingdom Hearts quite a bit.

In one section of the trailer, as pictured above, you can see the player opening a shortcut menu with commands for a limit break and a potion, just like how in Kingdom Hearts a shortcut menu can be used to access spells and healing. In other sections we can see the UI elements lighting up as the player lands attacks - the flashing seeming to incidate button presses, showing that this is built around a more traditional (and more mashing-friendly) button-hammering combat system than the leisurely button-holding action of Final Fantasy 15.

Obviously this is really difficult to truly understand without playing the game, but it definitely appears this will veer closer to Kingdom Hearts than FF15 - which makes sense, since Kingdom Hearts director Tetsuya Nomura is at the helm, while Kingdom Hearts 2 battle director Mitsunori Takahashi is also on board. Here's hoping some lessons can be learned from KH3, which definitely has the best combat in the series.