When Far Cry 5 launches at the end of the month, you will be able to spend money on cosmetic items.

Far Cry 5, like many of the biggest games released today, will have an in-game store you can spend real money at. This won't involve any chance-based items like loot boxes, however, so you'll only be paying for what you want.

The items in the store will include cosmetics as well as time-saving boosters. Far Cry 5 has a currency called Silver Bars, which is what you will be spending money on.

According to PC Gamer, Silver Bars can also be acquired by playing the game normally. In once instance, the player found a few of them in a loot cache in the game's world. 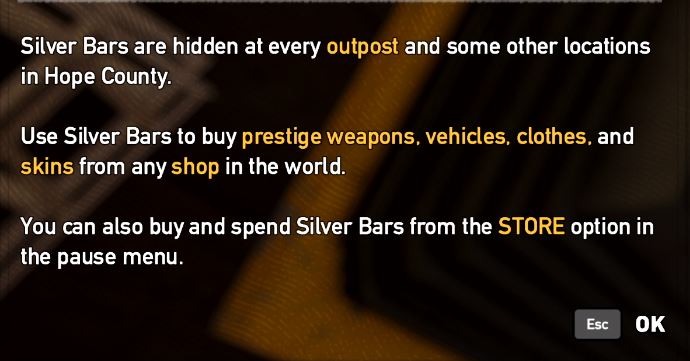 Silver Bars can also be used to buy prestige weapons, vehicles, and the aforementioned cosmetic items like clothes and weapon skins from the shops in the game's world. In short, the same currency is used to buy items from NPC traders and through the in-game store.

The in-game store wasn't live at the time, so prices vs real-world cash have yet to be revealed. In most cases, in-game currency bundles go live on digital stores on the day of release, so we're going to find out for sure then.

We recently went to Ubisoft to play Far Cry 5, and found that its fucked up and weird formula hasn't changed much.