The recent Wastelanders update added Gold Bullion as a new currency in Fallout 76 and you're going to need a lot of it to purchase the latest items for your camp.

Gold Bullion is the new currency that will bag you more than a bunch of caps ever could. Before you can begin collecting this new currency, you'll need to complete the first Wastelanders main quest. After that, you can buy Gold Bullion from Smiley in The Wayward bar.

You can check out our guide on how to complete Hunter for Hire and the following quests here. 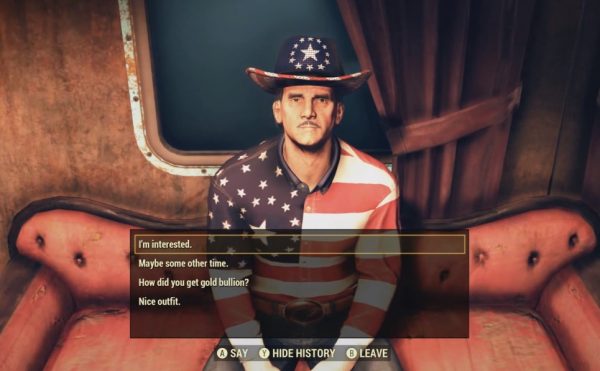 Fallout 76: Wastelanders - How to get Gold Bullion and Treasury Notes

Once you've unlocked Smiley, you'll be able to buy Gold Bullion from him, but there's a limit to how much you can buy each week. He'll sell you 50 Gold Bullion for 1000 caps and you can buy up to 300 Gold Bullion per in-game week, meaning that you can't just endlessly farm it from him.

There's also a daily limit on how many notes you can use in a day and how much Gold Bullion you can earn, to the tune of about 200 Gold Bullion. That being said, if you were to 20 Treasury Notes every day, as well as buy some from Smiley, you could stand to earn 1700 Gold Bullion a week which will let you buy some cool shit.

You'll usually get two notes per public event, though high-level players can earn a maximum of four from particularly difficult events, so it won't take you too long to reach the daily limit.

Fallout 76 - What to buy with Gold Bullion

Now that you've got a nice stack of Gold Bullion, it's time to get spending. You can exchange Gold Bullion for new plans including weapons, mods and armour parts, including the new T-65 Power Armour and Secret Service set. You can also sell it to other players or, if you're a bit of a dick, steal it from unsuspecting players.

New items will be added to the list as time goes on but if you're looking for better gear and blueprints, buying them with your Gold Bullion is the best bet. You might need to sacrifice a portion of your Gold Bullion to the factions or government to access particular plans - especially Vault 94 gear - but it's worth it if you're after something special.

You can also check out the new faction rewards here as well as where to find the Purveyor and how to recruit allies and romance them.