Starting with a spring update, Bethesda intends to breathe a little bit of new life into the oft-troubled Fallout 76 over the next 12 months, and it's started to tease a little bit of what we can expect from the coming weeks and months.

In Spring, we can expect to see Special loadouts, camp slots, mannequins, daily ops expansion, crafting sliders, and – perhaps controversially – aim-assist on console. You can read much more about Fallout 76’s Locked and Loaded update – which arrives on April 27 – at the link.

Later, in Summer, the developer will add more Steel Reign quests, expand on legendary crafting, and add unlimited seasonal ranks to proceedings, too.

Then, in Fall, the company promises to make changes to how private servers work via “the next evolution of private worlds”, and expand the daily ops system to make it a bit more engaging for regular players.

Lastly (at least for now), Winter will bring more four-star legendary gear, a cult-based seasonal event, public events based on “invaders from beyond”, and – best of all – campsite pets!

Fallout 76 was one of a few games, alongside Skyrim, Fallout 4, Prey and Dishonored, that got an FPS Boost recently on Xbox Series S|X.

You can see the graphic for the roadmap embedded below. 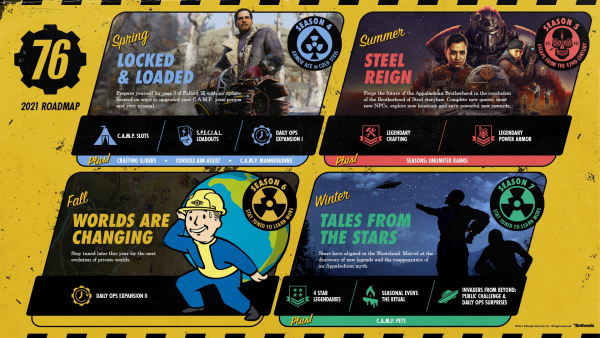