The Collector's Pack includes the game, a making of DVD, two RAGE comic books published by Dark Horse, and the exclusive digital contents of the Anarchy Edition.

Here's the extra details on it:

Making of DVD: Features exclusive access to the legendary id Software where they discuss the characters, enemies, various weapons, ammo types and gadgets you'll come across in the RAGE wasteland. id staff go into detail about the world they crafted, as well as the game's variety of intense missions, co-op modes and Road RAGE, the vehicular combat mode. Not only does the 'Making of' DVD contain a behind-the-scenes series of interviews with the team, but also footage from the 2011 QuakeCon event.

Comic Books: This comic series, developed with the direct participation of RAGE's creative director, Tim Willits, is set prior to the events in the game and will provide numerous insights into the game's storyline.

RAGE will hit UK retail shelves on October 7, and you can pre-order the Collector's Edition through here for £39.99. 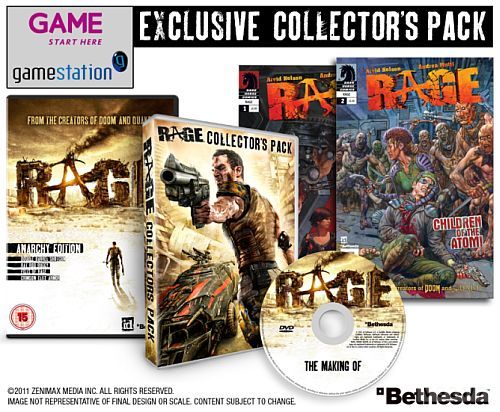