EA has said pre-orders for Battlefield 3 are hugely higher than those for Bad Company 2, and has shown solid results for both the full-year ending March 31 and its fiscal Q4.

"Outside chance" SWTOR could slip into January 2012.

EA lost $276 million in the year ended March 31, narrowed from the $677 million lost in the previous year, while sales stayed virtually unmoved at $3.589 billion compared to last year's $3.654 billion.

Profit for the fourth quarter, ending March 31, was well up, at $151 million compared to $30 million in the previous corresponding period.

The company also said that Battlefield 3 pre-orders were up over 700 percent on Battlefield: Bad Company 2, the last game in the series which released last year.

"We know we have a big competitor, but head-to-head with Call of Duty in Q3, we have the superior game engine, a superior development studio, and a flat out superior game," said Frank Gibeau. "Our goal is to significantly gain share in the huge FPS category and to put the other team on defense."

Cumulative sales of Dead Space 2 are now 40 percent higher than that of the original at this point in the game's cycle, the firm said, although no specific figures were given.

The company also gave a full release schedule for the coming fiscal year, showing the newly-slipped Mass Effect 3 in the fourth quarter and confirming RPG Kingdoms of Amalur: Reckoning for the same first three months of calendar 2012.

"We know we have a big competitor, but head-to-head with Call of Duty in Q3, we have the superior game engine, a superior development studio, and a flat out superior game.Our goal is to significantly gain share in the huge FPS category and to put the other team on defense."

Need for Speed: The Run, which was only announced last week, has now been confirmed for the holiday quarter.

SWTOR could slip into January 2012

EA said during its call to investors that it while it had expected to release Star Wars: The Old Republic during Q2 or Q3 for FY 12, the "end of our guidance range assumes the outside possibility of a January launch."

"While we fully anticipate launching Star Wars: The Old Republic in Q2 or Q3, the low end of our guidance range assumes the outside possibility of a January launch."

The firm called the game the "biggest event of the year," and a "jawdropping subscription-based MMO that is captivating critics and fans in the beta test."

EA said the game has over one million double-opt-in beta testers for "the world’s first story-driven, fully voiced MMO."

According to Gibeau, the firm plans to releases 22 primary titles down from 36 in fiscal year 2011, and the fiscal 2012 title plan posted below details the principal titles to be launched by quarter; however, SWTOR is not on the list as it will launch as a digital service.

EA plans to release the game as a subscription-based service, and is refusing to lock down a release date so it won't "tip off the competition," and due to the fact the firm wants the game to spend more time in beta to "guarantee a spectacular experience at launch."

Going digital in a digital world

Digital revenue for the fourth quarter also showed heavy growth, up from $144 million in 2010 to $211 million this year. On a full-year basis, downloadable content – from console and PC combined – was triple the firm's fiscal year 2010 results.

"We substantially exceeded our own ambitious target for digital revenue," said CEO John Riccitiello. "We set out the year with the goal of hitting $750 million. In the end, our digital nonGAAP revenue grew by 46 percent and exceeded $800 million. I am particularly proud of EA’s rapid growth and scale in digital; and that our growth rate almost doubled that of the digital sector overall. We did it in a way no other competitor can and in a way that best addresses the future opportunity in the market.

"We did it across multiple IP, across all the relevant platforms, from social to mobile to console, and across a variety of business models."

"We will transform EA from a packaged goods company to a fully integrated digital entertainment company."

"Today, we are announcing a big shift to “offense”.

"The consumer has changed," he continued, "200 million console players have become 1.5 billion consumers gaming on multiple devices. We are the only gaming company serving this larger opportunity.

"I’d now like to outline a shift in our strategies. When we established objectives around reducing title count, cutting costs and starting a digital business, we did so recognizing that we needed to execute a turn-around and the major part of what needed to change was to reduce titles and cost. Our strategies could be defined as fundamentally “defensive”.

"Today, we are announcing a big shift to “offense”. Over the coming years, we will transform EA from a packaged goods company to a fully integrated digital entertainment company.

Riccitiello said EA plans to "transform EA to a games-as-a-service model," by focusing on three new strategies. One of these is Intellectual Property which he said will see titles FIFA, Madden, Battlefield, Need For Speed, The Sims, Dragon Age, and Mass Effect become a "year-round businesses that lead their sectors across a range of platforms."

Riccitiello said the second strategy was through platform, as the firm sees itself as a "software platform every bit as much as... a content maker for other companies’ platforms."

"We have a great start with 112 million consumers in our Nucleus registration system, up from 61 million a year ago," he said. "And, while we will continue to be a great partner to our best retail customers and first party partners, you will see the beginnings of a consumer game platform emerge at EA that complements and extends the console ecosystem and addresses the wider opportunity on other devices."

The third strategy involved working with talent, as Riccitiello claimed EA was "the only company with world-class teams working cross-platform on social, mobile and console development."

"We are integrating these teams and augmenting them with product monetization and marketing," he said. "It’s a big change. You can see this as a way to better manage our IP, and drive up the ARPU for our core properties. As a developer, you can see this as the reason EA will be the most interesting and satisfying place to work in the game industry."

"We expect the worldwide interactive entertainment segment will grow 5 percent to 10 percent in calendar ’11 versus calendar 10’, with more than 20 percent growth in digital and an
approximate 5 percent decrease in packaged goods," added CFO Eric Brown.

During the call, it was noted that more on Mass Effect 3 would be shown at E3, such as features and ways to play it. The game will ship simultaneously on all three platforms, something promised by BioWare when the game was announced, and since the game is more of a shooter-rpg, it will have a far larger market opportunity than Mass Effect 1 and Mass Effect 2 did upon release.

In addition, four unannounced sports games will ship from EA in the fourth fiscal quarter. 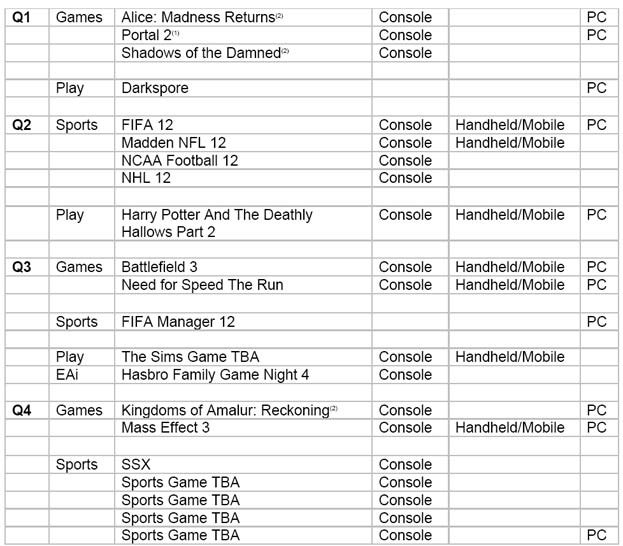