Originally released in Japan back in 2017, it has taken some time to reach these shores, and with good reason: Square-Enix has made some substantial tweaks for its Western release. Now don’t panic, this isn’t one of those situations where content has been removed (like with some of the Yakuza titles). Instead, we’re getting a raft of improvements.

First, and by far the most impressive, is that the Western release will have voice acting for its major characters and cutscenes. The Dragon Quest games have a reputation for some sterling voice work, such as Ricky Grover’s rough cockney portrayal of Yangus in Dragon Quest VIII. They bring a real extra dimension to the already bold cast of characters. There’s no doubt been some chatter about the West just not having the patience to read text boxes, but this is a brilliant addition to the game.

We had the chance to play two areas at a recent preview event: the very beginning, which takes place in the hero’s home village of Cobblestone; and across the grassy fields to the Capital city of Heliodor, where they must speak to the King about the fact that they are the reincarnation of The Luminary, a legendary hero who has saved the world in the past. 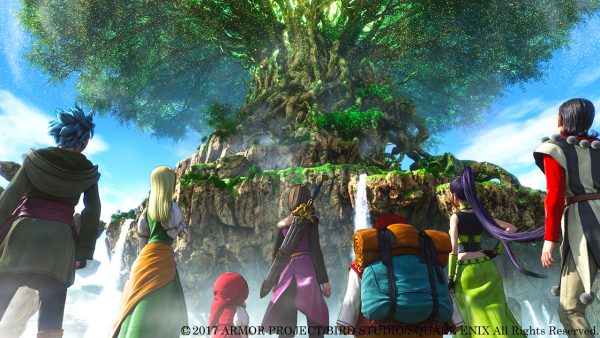 The world is wonderful to explore. This is a series that has always shunned realism, instead focusing on striking anime art, with characters designed by Dragon Ball creator Akira Toriyama - he really likes stuff with ‘Dragon’ in the title, OK? It is bright and colourful, with great detail in every house, shop, and street - lush green grass reaching out for miles into the distance, where mountain regions that you can no doubt travel to later on are framed by a Sega Blue sky. It gives the illusion of massive scale and endless adventure.

Upon arrival, there are a load of sidequests that get you exploring the back alleys and rooftops of Heliodor, the extra power of the PS4 allowing for a much larger scale environment than previous Dragon Quest titles. You can now sprint to cover that distance, too - another addition to this Western release, so you can now dash around town and between quest vendors. This is likely another comment on the patience of Western gamers. Again, it’s a welcome addition. Eventually, you visit the King, where it all kicks off and Dragon Quest XI’s apparent 80+ hours of story truly begins. Unfortunately, this is also where our demo of that opening area ends.

We’re then loaded into Gallopolis, a desert kingdom where a young prince is set to pass his coming of age ceremony, which requires him to win a horse race - the brilliantly named ‘Sand National’, a sure sign of the excellent localisation work being done for this release. This is where we get access to a full party. A band of traditional RPG cliches they may be - with Erik the thief, Veronica the black mage, and Serena the healer - but they’re a charming bunch. The most charming, however, is Sylvando, a circus entertainer you meet in the city who is destined to become a fan favourite, joining your team shortly after the horse race.

The horse race itself is a fairly straightforward minigame, not too different from most other equine-based events in games. You can spur the horse on, but too much depletes his stamina and leaves him trotting at a snail’s pace. Meter management is key, and collecting stamina refills allow you to keep sprinting for a longer duration. It’s dead simple, so in order to secure the best times you need a perfect line through the refills. 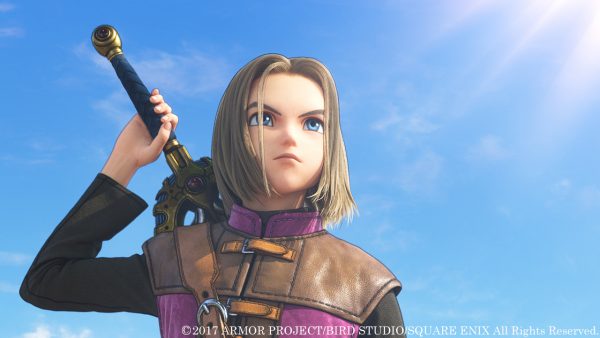 It is easy to sound like you’re being disparaging when describing aspects of Dragon Quest as ‘traditional’ or ‘like other games’. Take the combat, for instance - while every Final Fantasy game lives and dies on the quality of whatever new style of combat it brings to the table, Dragon Quest instead concentrates on doing the basic JRPG battles extremely well. It’s got more in common with the original 1987 Final Fantasy than any of its contemporary peers, but the abilities and spells your party members learn flesh out their role, and picking the best group for the job is key to success in the harder encounters.

As in previous games, a Tactics system allows you to have the AI take on most of the basic enemies while you’re cutting across the open plains. You can tell them to fight smart, recklessly, or take total control of them yourself, which is useful when taking on the game’s bosses. We had the chance to take on the Slayer of the Sands, a huge mantis/scorpion-esque beast that required all facets of the team’s abilities to take it down.

And those enemies! Each one, be it a new design or a classic Dragon Quest mob, are wonderfully rendered here on the PS4. Each one has memorable animations, whether they be attacking or dying, that actually make you want to see what the next one does, rather than trying to avoid scraps. A personal highlight was the return of Dragon Quest fave the Cruelcumber, an anthropomorphic cucumber who accidentally launches his spear up and into his own belly when you give him the finishing blow.

Dragon Quest XI is looking like another fine entry in the series, and it’s great to have a big, sprawling JRPG on the horizon. It’s full of the usual Dragon Quest whimsy, with musical motifs and familiar enemies from the previous games anchoring the title in the series’ rich history, but the power of the PS4 allows for a scale not previously possible. Sure, it’s been a while coming, but the extra time in the localisation oven appears to have been absolutely worth it.