A cheap and cheerful downloadable title has done more to sell Mike Bowden on the future of Microsoft's motion control than all the auto showrooms and tactical commands in the world. 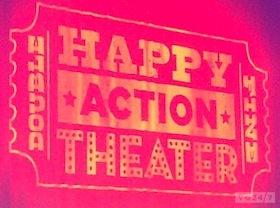 A collection of playgrounds for the young and the young at heart - by which we mean people who don't actively hate enjoyment and goodness.

Pat likes it a lot, too.

Unlike the majority of hardcore (I hate that term) gamers, I can proudly attest that I have certified DNA proof that I have had sex at least twice. Also, unlike the majority of hardcore gamers, I have Microsoft’s motion-cam, Kinect. I bought it “for the family”, which is a great ruse in order to get the missus to loosen the purse springs for some new tech, as many other members of the “I’ve done it with a woman and I’ve got the child to prove it” club will testify.

It was only after we opened the box and set it up that we realised my then-four-year-old son could not use it without my constant assistance. He needed me to configure the thing, log-in, select the game-type, then the sub-game type, then sub-sub game-type etc. I had to tell him to stand back, to the left, shout louder, to the right a bit, not there - whilst attempting to keep his extremely excited little brother from wandering into and bursting the Kinect-bubble that many motion games force you to create in order to play them.

In short, utter nightmare leading to Kinect not being played for about a year.

Even with some gentle nudging from me, he (now 5½ - the half being of utmost importance) wanted the comfort of a pad. The pad, you see, isn’t complicated. The marketing says it is. In fact, both Nintendo and now MS are, and have been, telling us that the traditional controller consisting, of fiddly sticks and confusing buttons, is a thing of the past. The future? An imprecise waggly stick with some awkward thumb-thingy or no controller at all. However, both come with rules and restrictions and take the immediacy and most of all, fun out of gaming.

Recently, after several PC hardware problems, I’d been looking at selling my Kinect cam so I can get the ol’ rust bucket moving at light-speed again. Funnily enough, my eldest son likes playing Bit Trip Runner and Super Meat Boy – using a keyboard. I know, you can take your jaws from the flaw MS and Ninty execs, the super-complicated, hackneyed keyboard is more preferable to a child than, “move here”, “configure this”, “sign in as that”, “don’t put your arms there” etc. Like, durr.

For anyone who has bought Kinect and actually wants to - in modern parlance - “have a laugh” with it, then spend 800 Microsoft Points on Double Fine’s Happy Action Theater. Seriously, do it. Do it now.

Then, the unthinkable happened: a game came along that didn’t require any of the above. None of it. He turned it on, stood in front a camera that didn’t need to know what profile his image was or should be attached to, chose a singular game-type with the simple, almost imprecise wave of a hand, and played. Mum was sat on the sofa, “lille bror” ran around flapping and screaming, getting in his older brother’s way, the big man himself ran forwards backwards, popping in and out of view as he, like every other five-and-a-half-year-old, became sidetracked; all this and the game didn’t mind. In fact, it only added to the fun.

For anyone who has bought Kinect, and like me has practically consigned it to the virtual, and perhaps literal, scrap heap due to the endless hoops and hindrances, and actually wants to - in modern parlance - “have a laugh” with it, then spend 800 Microsoft Points on Double Fine’s Happy Action Theater. Seriously, do it. Do it now.

Happy Action Theatre epitomises everything that Kinect games aren’t, but at the same time encapsulates everything that Kinect gaming should be: instantly accessible, light-hearted, simple, family fun. Aleks plays it every day. I play it with him. Kris tries to play it. Mum stands and watches, smiling broadly. Isn’t that the idyllic picture we’ve been sold since the beginning? So why has it taken so goddam long to finally arrive?

Decent question. However, from an outsider’s point of view, a very difficult one to answer. (as you know, I’m not a developer – can’t code for crisps.) Is it too easy to simply look at Tim Schafer and say, “well, the man’s a genius” and then leave it at that? I’m tempted to - as after lapping up all Double Fine’s downloadable offerings since the superb Pyschonauts and of course playing every Schafer-adventure, you could consider me a fan.

Or can we blame the tech itself? I mean, being cruel and going totally against the spirit of the game, Happy Action Theatre looks abysmal; low-res in-game graphics with an simple engine based around broad gestures only. No real finesse, no detail, no depth. But should these negative nouns actually be applied to the camera itself? Is the very nature of the beast - the bubble Kinect needs in order to work as the hardcore wants - the very thing that holds it back in terms producing a triple-A title? Again, very easy to blame the tech: a bad workman blames his tools etc., amirite?

If none of these grab you in the slightest,
consult a medical doctor. Quickly.

Whatever the reason, Lord Schafer’s ‘Theatre poses a problem in that it has set a rather uncomfortable benchmark for all developers of subsequent Kinect titles: “How are we going to give the player that amount of freedom and still make our game work?” Because, believe it or not, the very thing that stops me from playing it isn’t the lack of the h4rdc0r3 gamez, it’s the very thing that stops my target-audience children from playing it. It’s finicky, fastidious, too much faffing!

With all that said, I had reached a point where I regretted buying Kinect, but Double Fine’s Happy Action Theatre came along and changed all that. However, is Schafer’s unique song and dance going to be a one-hit wonder, or will other developers learn from his libertarian approach and put immediacy back in the charts?

So if, like me, you one day actually want to prove you’ve done it with a lady instead of lying to your mates over Messenger about it and in a not too distant future end up with a Kinect under your TV, Happy Action Theater is your day-one purchase. It’s everything a rudderless game should be, and my family wants more.