DmC: Devil May Cry has been subjected to a savage shit-storm since was first revealed. VG247's Dave Cook plays through the whole game to explain why you needn't be worried about Ninja Theory's treatment.

Reboots are tricky business. Few can deny that they have been the source of immense controversy over the years, but none have been quite as scrutinised as Ninja Theory's take on Devil May Cry. The redesigned Dante, concerns over a simplistic combat mechanic and fury over the expletive-laden dialogue have kept critic's news reels flowing for the past year or so. It's a game people either can't wait for, or one they simply love to hate.

Granted, 'new' Dante may be swaggering stain on society at the outset, but throughout the plot he grows into the hardened defender of humanity we know from the PS2 era. It's a coming of age story in that regard, where the wayward, selfish anti-hero steps up to a bigger challenge and realises his true place in the world. You'll want to cheer for him by the time the end credits roll, and while it's not Shakespearean, it zings along at an enjoyable pace, telling a better story than its predecessors.

DmC is an experience wrapped around the idea of duality. It's the story of a hidden world buried beneath our own existence, populated by demonic monstrosities bent on controlling humanity through alarmist propoganda, mind-bending subliminal messages and drugged soft drinks. Dante's brother Vergil reaches out to him to help his resistance movement 'The Order' topple the dictatorship regime, giving him a chance to earn a sense of place.

Dante is reluctant to help at first, but by working alongside Vergil and his partner Kat - a human witch with the ability to traverse through to the hidden world of Limbo - he combats his inner demons, pieces together his shattered past, and realises he's destined for more than getting drunk and sleeping with angels in his dingy trailer.

It's a plot told through snappy dialogue - I mean aside from the swearing and trash talk you've already seen - and through inventive visual cues. An early scene in a park sees Vergil revealing the fate of his and Dante's father Sparda, and is set against animated grafitti on the park's walls that depict events as they're described. It works well.

One of DmC's last missions sees the pair raiding a sprawling tower, complete with animated chalk arrows that point a route around the stage. Meanwhile, a monologue of the team discussing their plan in front of a chalkboard hours earlier plays out overhead. It's a game rammed full of interesting story-telling devices like this and mechanics that exist to make it feel entertaining and fresh. 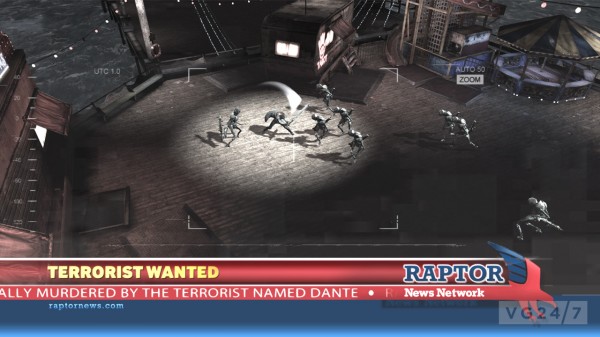 Mid-way through the plot you'll fight republican-styled news anchor Bob Barbas inside a Tron-like media world. As you batter his giant digitised head, he spews lethal static at Dante, prompting players to duck and weave as they move in to land hits. Every so often Barbas will pull you into an 'eye-in-the-sky' news report complete with a ticker laden with propaganda. As you fight demons down below, Barbas comments on the scene, assassinating Dante's character with slander and spin. It's hilarious and wildly inventive.

What you really want to know about is the game's combat though, and Capcom itself has said that the game presents a low entry level for newcomers. I think they shot themselves in the foot a little bit by saying that because making the combat more accessible doesn't make the game any easier in this instance.

I think it's important to explain this, because while the fundamentals are easy to grasp, the combo tree does demand skill once you start trying to nail longer sequences. Think of the basic moves as a gateway drug - a window for newcomers to understand the genre - before moving on to the tougher combos and difficult tiers. There's no harm in them being there, because the combo tree still allows for some mad feats of skill if you drill down into the possibilities.

Across the board the command list consists of short inputs - certainly nothing as long and as taxing as Bayonetta's move list exists here - but how you best use these moves is where the challenge lies, and this is where the use of angelic and demonic weapons come into play. Angelic weapons dish out more hits but are weaker and generally used for crowd control, while Demonic weapons hit fewer times at close range, pack more of a punch and can break through an enemy's guard.

You really need to get into the habit of switching between both weapon sets to dish out the hurt on enemies and to keep your style points flowing. It has been said that spamming demonic weapons can get you rank up easily during early stages. While true, once light and dark enemies - demons that can only be hit with a particular weapon type - come into play, such spammy tactics simply won't cut it.

If I had to compare Devil May Cry's combat to any other game, I'd quite frankly say Treasure's shooter Ikaruga - in which players must flick between white and dark ship modes to avoid corresponding bullets. You can see this comparison clearly in one of the game's later stages - in which Dante storms a nightclub and challenges its owner Lilith to a duel. 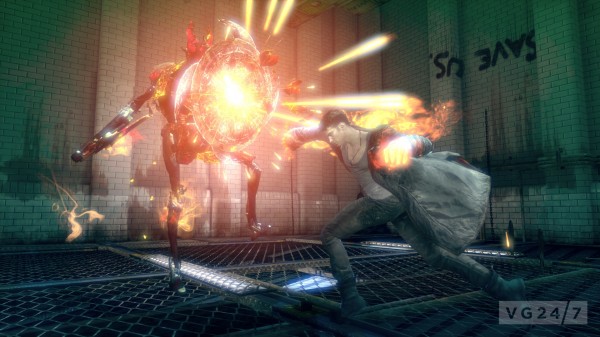 The ideas and stage design in this mission is comparable to the best of what Platinum Games has to offer, in that it's both bat-shit crazy and highly entertaining in tandem. On the surface it looks like a normal nightclub, but once Dante is dragged down to Limbo it becomes home to a sadistic death-sport, set against pounding musical equalisers and video game staples such as round counters, arcade machines and more.

The Ikaruga comparison comes into play as Dante fights light and dark enemies on a tiled dancefloor, complete with scrolling red and blue panels. Step on a red tile when in angelic mode and you take damage, so flipping between both weapon sets while concentrating on hitting light and dark demons becomes a lesson in coordination, much like the rest of the game.

The basics are spelled out clearly for you at the outset, such as the importance of weapon switching, and beginner combos that involve Dante's sword Rebellion and his dual pistols Ebony and Ivory. However, you're given a new ability or weapon during almost all of the game's 20 missions, ensuring that the combat mechanic never feels stale. By the end you have a diverse range of tools designed to dish out immense pain. They also carry over on subsequent playthroughs.

Players of Capcom's DmC demo will already know about the Osiris scythe, with its sweeping long range attacks, and the flaming Arbiter axe, which is ideal for breaking through shields and crushing armoured foes. Later these are joined by a pair of spinning Aquila blades that serve as an effective means of crowd control. Finally the Eryx stone gauntlets are great for short range melee blows, and let you pull off Ken's fierce Shoryuken from Street Fighter, which is a neat little nod to Capcom fans.

Weapons aside, you will earn upgrade points to spend on new attacks and abilities by racking up a high style tally during missions. There are also the synonymous red orbs to be found hidden in breakable objects, which can be used to purchase series staples such as green vital stars and Devil Trigger top-ups. It all feels familiar yet fresh, thanks to Ninja Theory's modern lick of paint.

Consumables also get more expensive with each purchase, so if you're starting a new playthrough on your existing save you may be in for a rough ride the second time, especially if you ramp up the difficult setting. Speaking of which, the game's difficulty is my one major gripe, as the highest tier available on your first playthrough - 'Nephilim' - saw me dying only twice throughout the entire campaign. 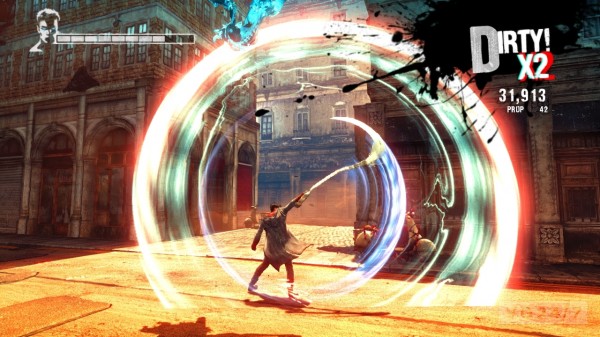 However, I've also played the game on the next hardest setting - 'Son of Sparda' and the spike in difficulty is brutal. It would have been nice to have started my first save on that setting, but for the sake of understanding the new mechanics at play, it can be overlooked, although some gamers may - scratch that - will lambaste Ninja Theory for locking it out at the start.

I also have one or two minor combat complaints. One is a certain type of chainsaw-wielding enemy that - while charging - will home in on you even if you pull off a dodge roll. This is a complaint I've levied at other brawlers such as Visceral's Dante's Inferno. What's the point of a dodge roll if enemies can turn to hit you regardless? It's a small issue as Dante's air dodge works better, but still, many hack n' slash titles still seem to fall into this trap.

Another is that while there is a parry system at play here, executed by slashing to meet your opponent's attack, it's not as well sign-posted as it is in other titles. That said there is scope to launch enemy projectiles back to the sender, and to trigger a burst of Bayonetta-style bullet time by dodging last-minute with the Eryx equipped. These little nuances will make the difference between a 'casual' newcomer and a seasoned pro.

But will you like this game? Well, many of you have already decided that you won't and that's just fine, because your loss is our gain, as Ninja Theory have reworked a franchise in dire need of a shake-up and have turned it into something that - while certainly accessible - is simply entertaining for its entire duration. My 'Nephilim' playthrough lasted 8 hours 40 minutes, and I wasn't bored or fed up once.

Granted I'm a big fan of the hack n' slash genre, but Ninja Theory has pulled out all the stops to create a game that hurls new ideas as you at every corner. This might be something simple like trapping you in a demonic subway station as a train screeches over head, opening up the possibility of launcher-based environmental kills.

It could even be something more ingrained like the Kablooey gun, which fires explosive rounds that can be detonated at will. Fire one into an enemy, wait until it gets close to a pack of demons and bang, you've got an ad hoc proximity mine that keeps your style meter flowing freely. Yes on the surface Dante's input commands have been dumbed down, but that doesn't mean you can't experiment or show off.

Series newcomers will feel empowered, while veterans will consider how to get the most out of the developer's move set. It's as inviting as it ever was, even if the central star wears a new face. Couple this with a superb soundtrack by Noisia and Combichrist - no, it's not all dubstep as the demo suggested - and you have a game that delivers entertainment and fun in spades.

This review will likely get fully ripped apart by those who have already decided that DmC: Devil May Cry is utter garbarge, and that's fine, people are allowed their opinions, but to objectively dock the game down based on some of the negative opinions floating around the internet today would be to do Ninja Theory a great disservice.

While it may not match the brilliance of Bayonetta, DmC can confidently walk among the giants of the genre, and I for one simply can't wait to see what the developer has in store for the sequel.

DmC Devil May Cry is out on PS3 and Xbox 360 across Europe and America on January 15th.